A Walk that Makes a Difference 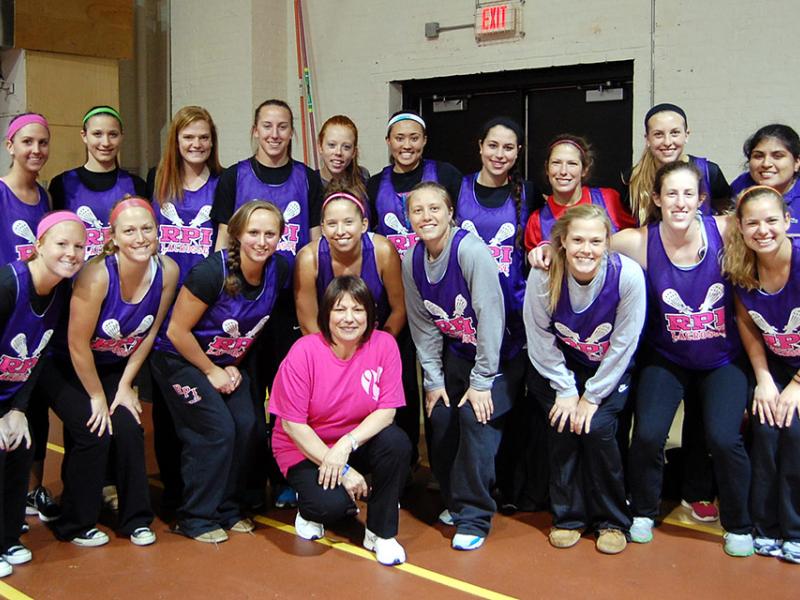 Changemakers in Class of 2021 Prepared To Make a Difference
More Than 2,100 Degrees To Be Awarded at 215th Commencement Ceremony
Rensselaer GameFest 2021 To Be Held on May 8
Co-Directors Named for Institute for Energy, the Built Environment, and Smart Systems
Rensselaer To Co-Host Capital Region Sustainable Futures Conference
October 19, 2012

A Walk that Makes a Difference

Breast cancer is the most common cancer among women in the United States, other than skin cancer. It is the second leading cause of cancer death in women, after lung cancer, according to the American Cancer Society.

A Rensselaer employee for more than 25 years, Phyllis Gates is no stranger to breast cancer. In February, the assistant director in the Institute Advising and Learning Assistance Center discovered a tumor in her breast during a self-exam. Surgery followed, along with chemotherapy and more than 30 rounds of radiation.

“You never know when cancer will strike,” said Gates. “I was always one of those individuals who believed that breast cancer would never happen to me. This experience has taught me that you are never exempt. Don’t ignore the signs in your body. As a woman, yearly mammograms and self examinations are important. After all, the self exam is what saved me.”

Throughout her months of treatment, Gates, who also serves as the faculty liaison for the Rensselaer women’s lacrosse team, has maintained her sense of humor. “Everyone who really knows me knows that I am not the kind of person to sit at home and eat bon-bons!” Gates said while laughing.

“Even while going through chemo and radiation, I never missed a day of work due to my treatments,” Gates said. “My family and the RPI community have been my support system. I have a basket full of cards from so many folks at RPI, and that has meant a lot. This is going to be a busy weekend for me as I celebrate my daughter’s baby shower and my sister’s 50th birthday, but I plan to carve out time to walk in the Making Strides event with members of the RPI women’s lacrosse team. I am excited and look forward to supporting this event because I am more aware of breast cancer and its impact. I am walking to find a cure and to help other women.”

The annual event honors breast cancer survivors, increases awareness, and also serves to raise funds to help the American Cancer Society fight the disease with breast cancer research, information and services, and access to mammograms for women who need them.

Audrey Stapleton, a junior majoring in geology who serves in the attack position for the women’s lacrosse team, said that team members plan to support the event. “The team is really excited about supporting this event,” Stapleton said. “We decided to participate in the walk because it is a great way for our team to show our support and appreciation to Phyllis, our academic liaison, especially since she has supported us in so many ways. It’s also a great way to reach out to others. This is our second year of walking, and while our fundraising goal is $300 dollars, we hope to raise as much as we can.”

The Rensselaer women’s hockey team also plans to lend their continued support to this year’s event, hoping to reach their goal of raising $1,500.Team captains, Kate Daniels, a senior defensemen and a mechanical engineering major; and Taylor Horton, a senior forward, who is an interdisciplinary science major, said that they many of the players have been affected by cancer in some form or another.

“Our team is proud to participate in the Making Strides event,” Daniels said. “It’s a great way for us to show support, not only for our family and friends, but also for members of the greater community. People of all walks of life are impacted by breast cancer, and the spirit of coming together and fighting for a cure provides a uniting spirit of hope.”

“The American Cancer Society is so proud of its lengthy and multi-faceted partnership with RPI,” said Diana S. Martin, regional vice president for the American Cancer Society. “Together we have championed many initiatives including a record-breaking Relay for Life event, an investment in breast cancer research and awareness through Making Strides Against Breast Cancer, and the establishment of a tobacco-free campus.  RPI’s leadership, staff, faculty and students are at the forefront of these cancer-fighting efforts to the great benefit of our community.”

Within the community, funds from the Making Strides events offer patients transportation assistance to and from their treatment appointment; free lodging for those traveling for treatment; workshops that teach beauty techniques to female cancer patients; emotional support programs that connect newly diagnosed breast cancer patients with survivors; cancer education classes; and access to an online cancer survivors support network.

In addition, funds raised also help to support promising research. For example, in 2010, a Research Scholar Grant from the American Cancer Society was awarded to Rensselaer researcher Lee Ligon for her work on breast cancer. Ligon is investigating interactions between cells as breast cancer spreads within the body. The grant includes a four-year $720,000 award to support the research.

According to the American Cancer Society, right now there are more than 2.5 million breast cancer survivors in the United States. For more information about the event, visit the Making Strides site.