Scaling Up Success in High-Performance Computing at Rensselaer Polytechnic Institute 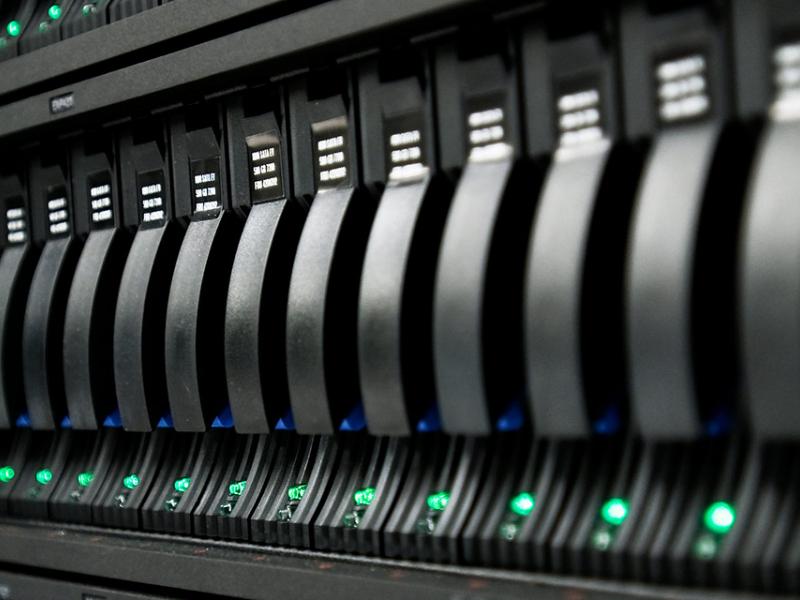 Scaling Up Success in High-Performance Computing at Rensselaer Polytechnic Institute

The combination of powerful new hardware, a talented new director, and a continued industry focus is set to amplify the success, reach, and impact of the Rensselaer Polytechnic Institute supercomputing center.

Parallel and distributed computing expert Christopher Carothers has been named director of the Rensselaer Computational Center for Nanotechnology Innovations (CCNI). In this role, Carothers is charged with making the new supercomputing resources of CCNI accessible to Rensselaer students and faculty. He is also responsible for forging new collaborations and opportunities for Rensselaer researchers to continue solving critical high-performance computing problems and creating value for the center’s partners in industry, academia, and government.

“High-performance computing enables a great many research programs at Rensselaer, ranging from nanoscale and molecular-level investigations into understanding protein structure and function to macroscale endeavors such as designing new aircraft wings. CCNI is both a research platform and a differentiator that helps to attract the brightest students, researchers, and faculty to Rensselaer,” said Jonathan Dordick, vice president for research at Rensselaer. “Dr. Carothers is an outstanding academic leader and a talented researcher. We are confident that Chris will chart an exciting course for CCNI to follow and we look forward to his leadership and vision for the next chapter of supercomputing at Rensselaer.”

“Chris Carothers is a dynamic leader in the area of massively parallel computing, leading CCNI’s mission of working with industrial and academic partners to explore the potential of high-performance computing, and expand the use of our supercomputing resources,” said John Kolb, vice president for information services and technology and chief information officer at Rensselaer. “The efforts of CCNI, under Chris’ leadership, will help position New York and the United States as global leaders in modeling and simulation-based research and development, scientific discovery, technological innovation, and advanced manufacturing.”

“Supercomputing touches—or will soon touch—nearly every discipline, from science and engineering to finance, social sciences, and the arts. The importance of this technology cannot be overstated,” said Carothers, also a professor in the Department of Computer Science at Rensselaer. “The central mission of CCNI is solving problems for next-generation basic and applied science and engineering research through the use of massively parallel computation and data analytics. By solving these complex computational problems, CCNI is a transformative tool for research, education, and industrial application for Rensselaer, New York state, and the nation.”

Industry FocusSince opening in 2007 as the world’s seventh largest supercomputer, CCNI has enabled researchers at Rensselaer and around the country to tackle challenges ranging from advanced manufacturing to cancer screening to sustainable energy. CCNI is a $100 million partnership among Rensselaer, IBM, and New York state. The center currently supports a network of more than 850 researchers, faculty, and students from 50 universities, government laboratories, and companies across a diverse spectrum of disciplines.

In many cases, CCNI empowers these researchers to perform advanced calculations, modeling, or simulations and generate results within a few hours, instead of waiting years for less powerful computers to complete the same tasks. CCNI is also a resource for the growing number of companies that use or are interested in using high-performance computing as a way to create and sustain competitive advantage. Rensselaer experts assist these companies in translating their design, engineering, and manufacturing challenges into problems that can be tackled by a supercomputer.

In partnership with the Rensselaer Scientific Computation Research Center (SCOREC) and New York state’s High Performance Computing Consortium (HPC2), CCNI works with New York companies to optimize current products, design next-generation technologies, and train staff in the methods and best-practices of high-performance computing. Working with a range of businesses, from Fortune 50 firms to start-ups with three employees, CCNI and its partners help companies decrease product development cycle times, improve quality of products, reduce costs, and boost their ability to compete in the global marketplace—all without having to invest in or acquire their own supercomputing systems.

Rensselaer has worked with hundreds of users and dozens of companies to this end, from local engineering software maker Simmetrix and silver salts manufacturer Ames Goldsmith to New York state-based technology leaders Xerox, IBM, and Corning.

One of Carothers’ first endeavors as director of CCNI is traveling to Supercomputing, the International Conference for High Performance Computing, Networking, Storage, and Analysis, this week in Salt Lake City to network with the high-performance computing community and host an informational session with potential partners and collaborators in industry, academia, and government.

Powerful HardwareCCNI opened its doors in 2007 with 16 racks of IBM Blue Gene/L supercomputers and other machines with a combined total of more than 100 teraflops of computing power—one teraflop is the ability to perform one trillion, or 1012, floating point operations per second. This summer, the center installed a new 200-teraflop system comprised of a powerful IBM Blue Gene/Q supercomputer. Along with the Blue Gene/Q, the new system features a multi-terabyte memory (RAM) storage accelerator, petascale disk storage, rendering cluster, remote display wall systems, and other components. The result is a machine with a balanced combination of computational power, fast data access, and visualization capabilities.

The new Blue Gene/Q system was funded primarily by a $2.65 million grant from the National Science Foundation (NSF). The new Blue Gene/Q component of the system boasts more than twice the computational power than the center’s 16 racks of Blue Gene/L, while taking up less than 1/10th of the space and using only 1/6th of the electrical power to operate. However, the true power of the new Blue Gene/Q system at Rensselaer is its balance; it is many times faster than the Blue Gene/L system on data-intensive problems, and the combination of computation, fast data access, and visualization supports a significantly broader scope of research.

The new Blue Gene/Q system is the result of the ongoing strong partnership between Rensselaer and IBM, both of which are committed to moving forward and pushing the boundaries of high-performance computing technology.

Innovative ResearchCCNI and high-performance computing are boosting the ability of Rensselaer faculty and students to advance their leading-edge research. Scientific and engineering studies are generating more data than ever before, and there is a rapidly growing need to interact with more of this data in increasingly meaningful ways. CCNI’s supercomputing systems, in the hands of Rensselaer student and faculty experts, are powerful tools to help researchers across nearly all academic disciplines and industrial sectors overcome this challenge.

Access to CCNI and its supercomputers is a key asset and differentiator for Rensselaer faculty researchers seeking funding from the federal government and other organizations. In September, for example, a team of nuclear engineers and computer scientists at Rensselaer secured a $2.6 million grant from the NSF to investigate how computer video cards could be connected to make inexpensive supercomputers for medical imaging departments at hospitals. In two NSF Faculty Early Career Development (CAREER) awards totaling more than $1 million, one young researcher received funding to advance research into the design of nanomaterials for use in nuclear energy systems, while the other received funds to investigate the swimming behavior of bacteria and other microorganisms. Another study, funded by New York state and the NSF, used large-scale quantum simulations to characterize the ability of graphene—the thinnest material in the world—to transmit electricity, for use in next-generation electronics.

The proposals for all of these grants and projects—and many others—leveraged the computational strength and researcher expertise of CCNI. Over the past five years, nearly $50 million in external research funding has been attributed to CCNI.

Approaching the ExascaleResearchers at Rensselaer are known for developing highly scalable parallel processing and distributed processing techniques that allow computer modeling to be done across hundreds of thousands of processors. The Blue Gene/Q system furthers their capabilities and provides a platform for exploring and creating new techniques that will be broadly applicable to exascale computing. Experts in academia and industry anticipate realizing exascale computing—performing 1018 calculations per second—by the end of the decade. Exascale machines will have 50 times the computational power of today’s largest machines.

The new Blue Gene/Q system at Rensselaer will be a first stop for many researchers looking to scale up their research over the next decade. Once they adapt their project to work on the Rensselaer system, they will be well-positioned to migrate over to the larger petascale and future exascale systems installed at national laboratories. Interacting with other experts from across the country and around the world will help to ensure that Rensselaer students and faculty members continue to be at the front lines of developing extreme-scale computing techniques and defining next-generation computing problems in academia and industry.

Dynamic LeadershipAs the new director of CCNI, Carothers will oversee a staff of computational scientists and system administrators at the supercomputer center’s facility in the Rensselaer Technology Park in East Greenbush. He joined the Rensselaer faculty as an assistant professor in 1998, was named an associate professor in 2004, and a full professor in 2010.

Carothers’ research interests are in the areas of massively parallel systems with a focus on the modeling and simulation of complex systems. Since joining Rensselaer, he has secured about $7 million in research funding from agencies including the NSF, the U.S. Department of Energy, Army Research Laboratory, Air Force Research Laboratory, as well as several companies, including IBM, General Electric, and AT&T. His simulation research involves the creation of high-fidelity models of extreme-scale wireless and wired networks and computer systems. These models have executed using more than 100,000 processors.

Active in his professional community, Carothers has served as associate editor of the journals SIMULATION: Transactions of the Society for Modeling and Simulation International and ACM Transactions on Modeling and Computer Simulation. He is also an active reviewer for several publications. Carothers is a member of the Association for Computing Machinery and a member of the IEEE Computer Society.

Carothers received a best paper award at the 2009 Workshop on Principals of Advanced and Distributed Simulation. He also won best paper awards at the 2003 and 1999 Workshop on Parallel and Distributed Simulation. He received a NSF CAREER Award in 2002, as well as the MITRE Program Recognition Award for contributions on the U.S. Department of Defense High Level Architecture (HLA) project.

He received his bachelor’s, master’s, and doctoral degrees, all in computer science, from the Georgia Institute of Technology.