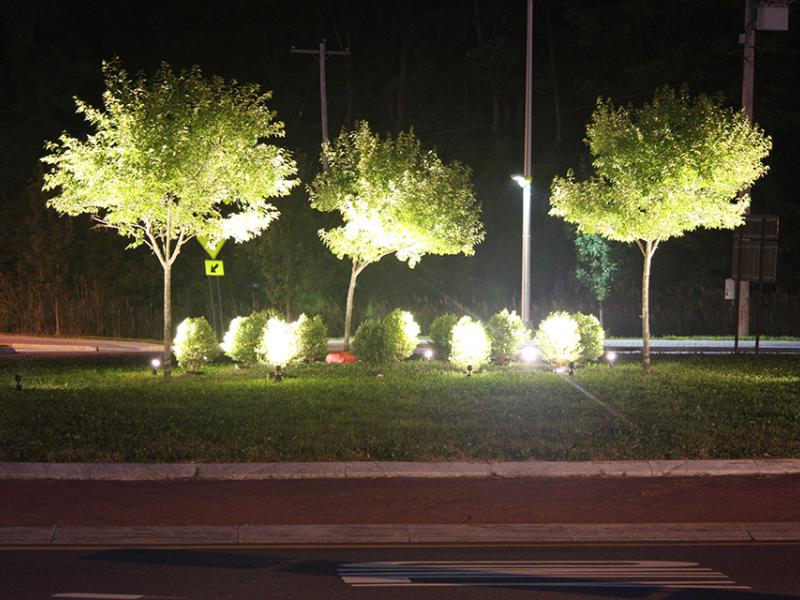 Roundabouts, also known as traffic circles, are increasing in number across the U.S. These intersections generally increase traffic throughput while reducing the severity of automobile accidents. However, as relatively new traffic features, modern roundabouts are sometimes described as confusing for drivers. One difference between roundabouts and conventional cross-type intersections is the location of pedestrian crosswalks. Drivers may be less familiar with the location of crosswalks when driving through a roundabout.

In a study sponsored jointly by the New York State Energy Research and Development Authority (NYSERDA) and by the New York State Department of Transportation (NYSDOT), the LRC designed, installed and evaluated new lighting approaches in real-world conditions. Senior Research Scientist John Bullough and LRC Director Mark Rea were the principal investigators for the study.

“Ecoluminance uses a combination of lighting and vegetation to provide visual delineation, illumination for important safety hazards and concerns, and cues about road geometry,” said Bullough.

The ecoluminance concept was implemented at a roundabout in the Town of Bethlehem in Albany County, New York with cooperation from the Town Board and the Public Works, Highway, Planning, and Police Departments. Researchers from the State University of New York College of Environmental Science and Forestry also assisted with the study, and companies General Electric Lighting, Forms + Surfaces and Lightspec Albany donated luminaires to the project.

During two preliminary demonstrations during the summer of 2011, the LRC installed lights and vegetation and obtained feedback from NYSERDA and NYSDOT engineers as well as from town officials and the Town of Bethlehem Bicycle and Pedestrian Committee. Based on this feedback, the LRC installed vegetation and retroreflective markers in the central island of the roundabout, LED landscape lighting to illuminate vegetation and trees, bollards at crosswalks, and LED overhead lighting along sidewalks and the road during the summer of 2012. Roadway edges and pedestrians were more visible than under the conventional lighting, and vehicles approached the roundabout with similar or slightly lower speeds.

Traditional lighting for roundabouts consists of a relatively large number of pole-mounted overhead luminaires, which are relatively expensive to operate because they are energy intensive. The LRC estimates that the initial cost of the ecoluminance system is similar to that of conventional lighting, but the energy use is only about a fourth, resulting in substantially lower energy costs as well as substantially lower light pollution impacts. "The ecoluminance concept could allow transportation agencies to integrate vegetation and lighting while reducing costs and environmental impacts," said Rea.

The LRC's report is available online at: https://www.dot.ny.gov/divisions/engineering/technical-services/trans-r-and-d-repository/C-08-03FinalReport-Project18233-C0803.pdf