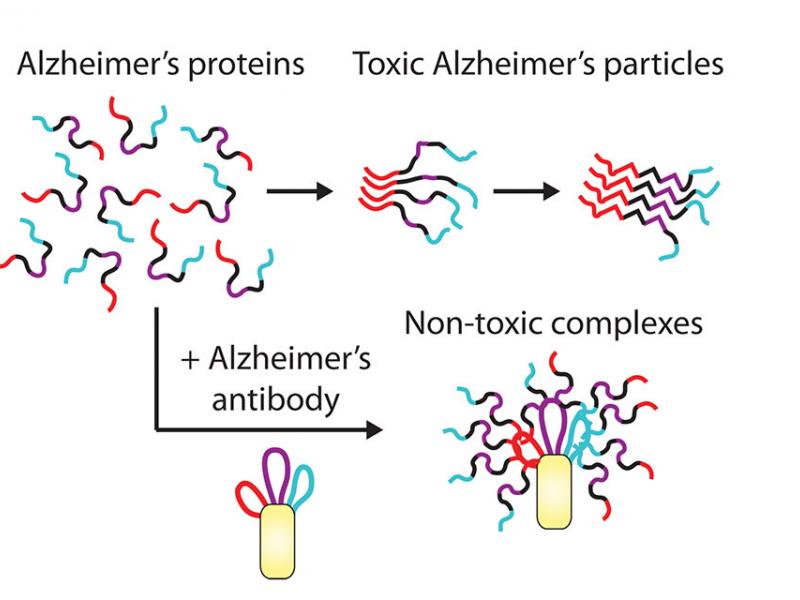 Antibodies developed by researchers at Rensselaer Polytechnic Institute are unusually effective at preventing the formation of toxic protein particles linked to Alzheimer’s disease and Parkinson’s disease, as well as Type 2 diabetes, according to a new study.

The onset of these devastating diseases is associated with the inappropriate clumping of proteins into particles that are harmful to cells in the brain (Alzheimer’s disease and Parkinson’s disease) and pancreas (Type 2 diabetes). Antibodies, which are commonly used by the immune system to target foreign invaders such as bacteria and viruses, are promising weapons for preventing the formation of toxic protein particles. A limitation of conventional antibodies, however, is that high concentrations are required to completely inhibit the formation of toxic protein particles in Alzheimer’s, Parkinson’s, and other disorders.

To address this limitation, a team of researchers led by Rensselaer Professor Peter Tessier has developed a new process for creating antibodies that potently inhibit formation of toxic protein particles. Conventional antibodies typically bind to one or two target proteins per antibody. Antibodies created using Tessier’s method, however, bind to 10 proteins per antibody. The increased potency enables the novel antibodies to prevent the formation of toxic protein particles at unusually low concentrations. This is an important step toward creating new therapeutic molecules for preventing diseases such as Alzheimer’s and Parkinson’s.

“It is extremely difficult to get antibodies into the brain. Less than 5 percent of an injection of antibodies into a patient’s blood stream will enter the brain. Therefore, we need to make antibodies as potent as possible so the small fraction that does enter the brain will completely prevent formation of toxic protein particles linked to Alzheimer’s and Parkinson’s disease,” said Tessier, assistant professor in the Howard P. Isermann Department of Chemical and Biological Engineering at Rensselaer. “Our strategy for designing antibody inhibitors exploits the same molecular interactions that cause toxic particle formation, and the resulting antibodies are more potent inhibitors than antibodies generated by the immune system.”

Results of the new study, titled “Rational design of potent domain antibody inhibitors of amyloid fibril assembly,” were published online last week by the journal Proceedings of the National Academy of Sciences (PNAS). The study may be viewed at: http://www.pnas.org/content/early/2012/11/14/1208797109.abstract

This research was conducted in the laboratories of the Center for Biotechnology and Interdisciplinary Studies at Rensselaer.

Along with Tessier, co-authors of the paper are Rensselaer graduate students Ali Reza Ladiwala, Moumita Bhattacharya, Joseph Perchiaccaa; Ping Cao and Daniel Raleigh of the Department of Chemistry at Stony Brook University; Andisheh Abedini and Ann Marie Schmidt of the Diabetes Research Program at New York University School of Medicine; and Jobin Varkey and Ralf Langen of the Zilkha Neurogenetic Institute at the University of Southern California, Los Angeles.

For more information on Tessier and his research at Rensselaer, visit: