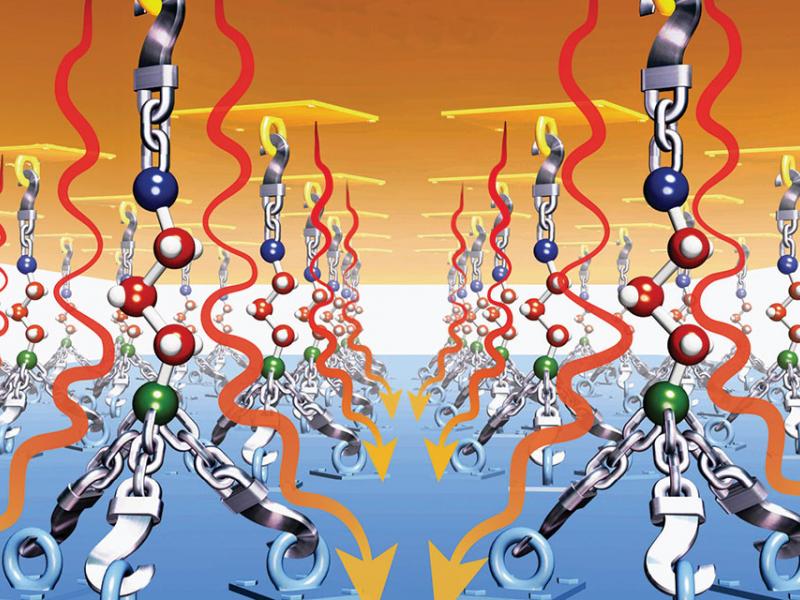 By sandwiching a layer of ultrathin “nanoglue” between copper and silica, the research team demonstrated a four-fold increase in thermal conductance at the interface between the two materials. Less than a nanometer—or one billionth of a meter—thick, the nanoglue is a layer of molecules that form strong links with the copper (a metal) and the silica (a ceramic), which otherwise would not stick together well. This kind of nanomolecular locking improves adhesion, and also helps to sync up the vibrations of atoms that make up the two materials which, in turn, facilitates more efficient transport of heat particles called phonons. Beyond copper and silica, the research team has demonstrated their approach works with other metal-ceramic interfaces.

Heat transfer is a critical aspect of many different technologies. As computer chips grow smaller and more complex, manufacturers are constantly in search of new and better means for removing excess heat from semiconductor devices to boost reliability and performance. With photovoltaic devices, for example, better heat transfer leads to more efficient conversion of sunlight to electrical power. LED makers are also looking for ways to increase efficiency by reducing the percentage of input power lost as heat. Ganapati Ramanath, professor in the Department of Materials Science and Engineering at Rensselaer, who led the new study, said the ability to enhance and optimize interfacial thermal conductance should lead to new innovations in these and other applications.

“Interfaces between different materials are often heat-flow bottlenecks due to stifled phonon transport. Inserting a third material usually only makes things worse because of an additional interface created,” Ramanath said. “However, our method of introducing an ultrathin nanolayer of organic molecules that strongly bond with both the materials at the interface gives rise to multi-fold increases in interfacial thermal conductance, contrary to poor heat conduction seen at inorganic-organic interfaces. This method to tune thermal conductance by controlling adhesion using an organic nanolayer works for multiple materials systems, and offers a new means for atomic- and molecular-level manipulation of multiple properties at different types of materials interfaces. Also, it’s cool to be able to do this rather unobtrusively by the simple method of self-assembly of a single layer of molecules.”

Results of the new study, titled “Bonding-induced thermal conductance enhancement at inorganic heterointerfaces using nanomolecular monolayers,” were published online last week by Nature Materials, and will appear in an upcoming print edition of the journal. The study may be viewed online at: http://go.nature.com/3LLeYP

The research team used a combination of experiments and theory to validate their findings.

“Our study establishes the correlation between interfacial bond strength and thermal conductance, which serves to underpin new theoretical descriptions and open up new ways to control interfacial heat transfer,” said co-author Pawel Keblinski, professor in the Department of Materials Science and Engineering at Rensselaer.

“It is truly remarkable that a single molecular layer can bring about such a large improvement in the thermal properties of interfaces by forming strong interfacial bonds. This would be useful for controlling heat transport for many applications in electronics, lighting, and energy generation,” said co-author Masashi Yamaguchi, associate professor in the Department of Physics, Applied Physics, and Astronomy at Rensselaer.

This study was funded with support from the National Science Foundation (NSF).

“The overarching goal of Professor Ramanath’s NSF-sponsored research is to elucidate, using first-principles-based models, the effects of molecular chemistry, chemical environment, interface topography, and thermo-mechanical cycling on the thermal conductance of metal-ceramic interfaces modified with molecular nanolayers,” said Clark V. Cooper, senior advisor for science at the NSF Directorate for Mathematical and Physical Sciences, who formerly held the post of program director for Materials and Surface Engineering. “Consistent with NSF’s mission, the focus of his research is to advance fundamental science, but the potential societal benefits of the research are enormous.”

“This is a fascinating example of the interplay between the physical, chemical, and mechanical properties working in unison at the nanoscale to determine the heat transport characteristics at dissimilar metal-ceramic interfaces,” said Anupama B. Kaul, a program director for the Division of Electrical, Communications, and Cyber Systems at the NSF Directorate for Engineering. “The fact that the organic nanomolecular layer is just a monolayer in thickness and yet has such an important influence on the thermal characteristics is truly remarkable. Dr. Ramanath’s results should be particularly valuable in nanoelectronics where heat management due to shrinking device dimensions continues to be an area of active research.”