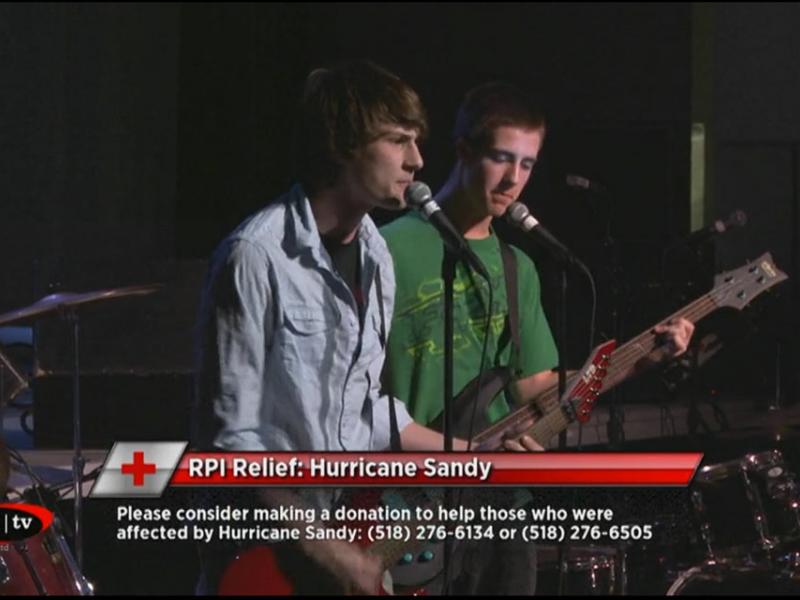 Last month, Hurricane Sandy — dubbed by many researchers as one of the most powerful hurricanes in American history — came ashore along almost 1,000 miles of the United States eastern seaboard, carving a path of destruction that also destroyed whole communities in coastal New York and New Jersey. To assist impacted communities and residents, on Saturday, Dec. 8, Rensselaer Polytechnic Institute will host a live telethon event to raise funds to help Hurricane Sandy victims. The event – which will also be webcast — will be held in the Rensselaer Union McNeil Room from 7 to 9 p.m. All proceeds will be donated to the American Red Cross.

The program also will be available for live viewing online: rpitv.org.

“The devastation caused by Hurricane Sandy has had a profound impact on our students and campus community,” said Cynthia Smith ’96, assistant dean of students and director of pipeline initiatives and partnerships. “Individuals who have embraced the ‘RPI RELIEF – Hurricane Sandy’ initiative are focused on raising money and supporting the many Rensselaer students whose families are impacted by the storm.”

“Rensselaer students and members of the campus community have always embraced the spirit of volunteerism,” Smith added. “They lend their time, energy, and expertise to assist others within the local community and beyond who need help in a multitude of ways. The planning involved in coordinating our first live telethon is nothing short of amazing, and a testament to our students’ heartfelt efforts to help rebuild communities and people’s lives.”

The RPI RELIEF program is focused on raising awareness and funds, as well as coordinating volunteer initiatives when disaster strikes an area. Since its inception, the program has responded to a series of major environmental disasters that have impacted the nation, the world, and even the Capital Region community. Some past RPI RELIEF efforts have included student initiatives to support those impacted by Hurricane Katrina, the earthquakes and tsunamis in Southeast Asia and Japan, along with Hurricane Irene and Tropical Storm Lee.

Smith also noted that with each disaster, the Rensselaer community has confronted the challenge and coordinated appropriate responses. “Our monetary donations to organizations that include the American Red Cross, Red Crescent, Save the Children, the Salvation Army, and others have helped those organizations acquire and distribute needed resources to those who need them most.”

For now, fundraising efforts are being coordinated largely in support of the American Red Cross.

The Community Advocates have established a “Reflection Wall” in the Rensselaer Union North Lobby for students and members of the campus community to express their thoughts and feelings about the storm and its aftermath. In addition, the Dean of Students Office has compiled a resource list for students so that they will be more prepared to help their families safely when they call or visit home.

In the coming months, plans are also under way to coordinate a spring break trip to assist in ongoing recovery and clean-up efforts.