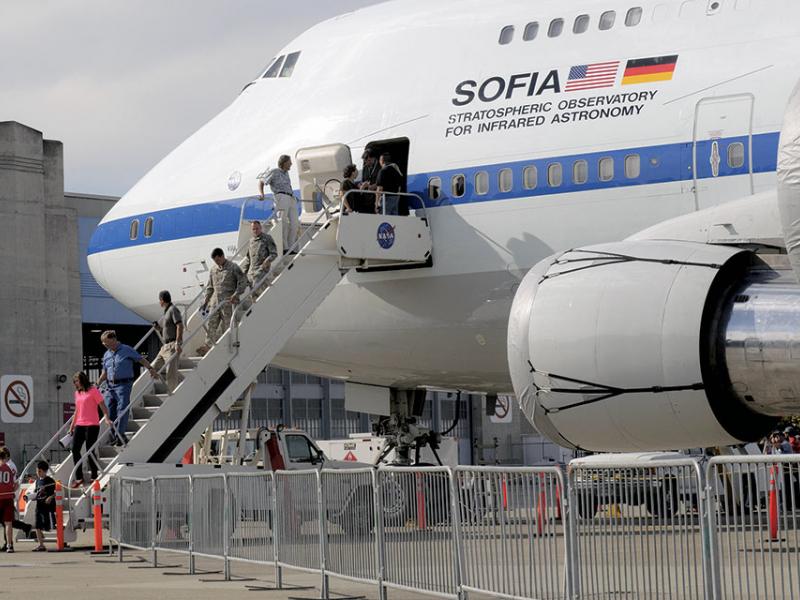 A team of astrobiology researchers — including two from Rensselaer Polytechnic Institute — will use a series of nighttime flights on an airborne observatory to search newly born stars for the presence of precursors to life.

The scientists, led by Douglas Whittet, director of the New York Center for Astrobiology at Rensselaer, will use the observatory’s infrared absorption spectroscopy capabilities to search for a suite of molecules in clouds of dust surrounding five young stars. Their work is part of the first season, or cycle, of research to be performed aboard the Statospheric Observatory for Infrared Astronomy (SOFIA), the largest airborne observatory in the world.

A partnership of NASA and the German Aerospace Center, SOFIA consists of an extensively modified Boeing 747SP aircraft carrying a reflecting telescope with an effective diameter of 2.5 meters (100 inches). The airborne observatory, based at NASA’s Dryden Aircraft Operations Facility in California, began a planned-20 year lifetime with its first cycle from November 2012 to December 2013.

“We’re interested in how the matter that you need to make planetary life came to be: Where did it come from and how was it formed? And since it happened here in our solar system, is it likely to happen elsewhere as well?” said Whittet, also a professor of physics. “We can’t go back in time to observe our solar system when it was born, but we can look at other regions that we believe are similar and use them as analogs for the early solar system.”

The scientists will determine the chemical composition of distant regions through absorption spectrometry, a technique that takes advantage of the fact that different types of matter absorb different segments of the wavelength spectrum generated by a given source of energy – in this case, the newly born star.

Whittet explained that the infrared spectra of newly born stars are rich in absorption features that signal the presence of organic molecules and water in the dusty remnants of the clouds from which they formed. These dusty remnants are the raw materials from which new planets may coalesce.

Aboard SOFIA, the scientists will be looking at the absorption spectrum of infrared light at wavelengths between 5 and 8 microns. The researchers will search for molecules such as methane, ammonia, formaldehyde, methanol, and formic acid — early precursors of amino acids. The work is a collaboration between Whittet and Charles Poteet, a post-doctoral research associate at Rensselaer, and researchers at SETI, the California Institute of Technology, Ithaca College, the NASA Ames Research Center, and Johns Hopkins University.

The current project builds upon recent work in which the scientists combined years of existing research to locate areas in outer space that have extreme potential for complex organic molecule formation. Whittet and his collaborators searched for indications of methanol, a key ingredient in the synthesis of organic molecules that could lead to life, and identified a handful of newly formed stars that are surrounded by clouds with a high concentration of methanol (about 30 percent).

For that project, the scientists were able to rely on observations made from ground-based telescopes, but Whittet said only SOFIA has the capability to gather the more specific data they currently seek.

“We’re trying to look at a part of the spectrum that doesn’t get through the atmosphere very well,” Whittet said. “Earth’s atmosphere, which contains a lot of moisture, absorbs most of the infrared radiation we want to detect. But SOFIA cruises at an altitude of about 40,000 feet, which is above almost all of the moisture, and allows us an unimpeded view of the stars.”

Further, said Whittet, although two space-based instruments equipped with infrared absorption spectrometry capabilities –  NASA’s Spitzer Space Telescope, and the Infrared Space Observatory, a European  Space Agency satellite – did take observations in that region, neither of them had the appropriate combination of resolution  and sensitivity for the group’s current work.

“There’s really nothing else out there right now that could collect the data we need for this research,” Whittet said.

The scientists were awarded 6.5 hours aboard SOFIA, time which may be used in one or several flights over the Pacific Ocean, and Whittet hopes he will be aboard for the observations. He said the scientists will likely publish findings from their research within a year after collecting the data.

The New York Center for Astrobiology  Based within the School of Science at Rensselaer Polytechnic Institute in Troy, N.Y., the New York Center for Astrobiology is devoted to investigating the origins of life on Earth and the conditions that lead to formation of habitable planets in our own and other solar systems. Supported by NASA, the $7 million center is a member of NASA’s Astrobiology Institute (NAI), and is a partnership between Rensselaer and the University at Albany, Syracuse University, the University of Arizona, and theUniversity of North Dakota. Researchers and students within the center seek to understand the chemical, physical, and geological conditions of early Earth that set the stage for life on our planet. They also look beyond our home planet to investigate whether the processes that prepared the Earth for life could be replicated elsewhere — on Mars and other bodies in our solar system, for example, and on planets orbiting other stars.