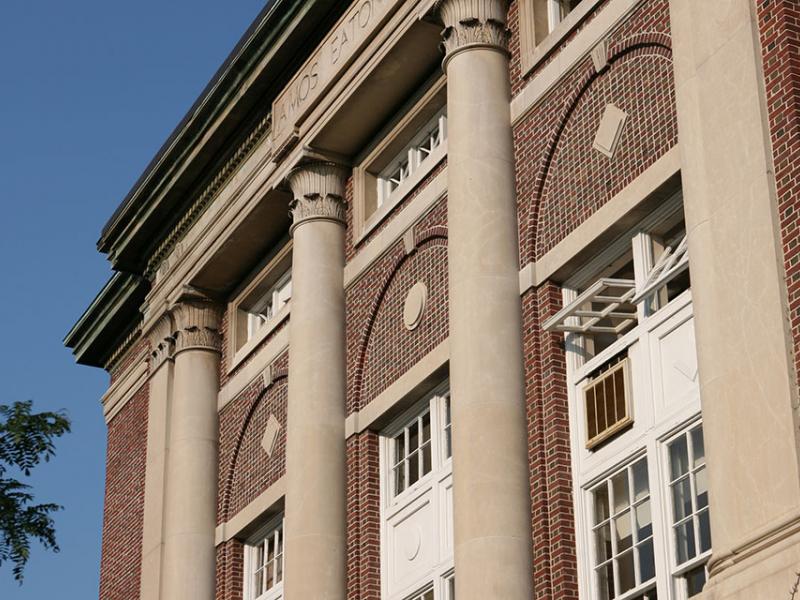 Professor Donald Schwendeman has been named the new head of the Department of Mathematical Sciences at Rensselaer Polytechnic Institute. Schwendeman's expertise lies in the general field of computational science and engineering where he has made contributions in diverse topics such as combustion and reactive flow, optimizing transonic and hypersonic wings, fabrication of integrated circuits, and the stability of imploding shock waves. He is also a longtime champion of the Mathematical Problems in Industry Workshop (MPI), an annual event in which faculty and students in applied mathematics tackle real-world problems posed by industry partners.

“Don has a great history of important research and positioning our students for success, and he’ll be a natural as the next head of this important department,” said Laurie Leshin, dean of the School of Science. “He has all the skills and commitment needed to take the Department of Mathematical Sciences to the next level of achievement.”

The Rensselaer Department of Mathematical Sciences is renowned for its strong faculty orientation toward applied mathematics. The department is considered one of the nation’s 20 best graduate programs in applied mathematics, as ranked by U.S. News & World Report.

“Everyone knows mathematics from their childhood, but many people may not realize the value of math in real-world applications. The techniques developed and the solutions supplied by applied mathematics support everything from medical applications such as ultrasound imaging, to microelectronics, to homeland security,” Schwendeman said. “Rensselaer has a strong tradition of applied mathematics and we are fortunate to have a legacy of world-class research. It is exciting and humbling to be chosen to lead the department.”

The department is one of the few in the country with a focus in applied mathematics, particularly within the areas of inverse problems, modeling and large-scale computations, operations research and data science, and stochastic and complex systems. Distinguished faculty within the department have received numerous awards, including NSF CAREER awards, and Guggenheim, Sloan, and Fulbright fellowships. The department confers B.S., M.S., and Ph.D. degrees, with enrollment currently at about 130 undergraduate and 60 graduate students.

Schwendeman’s own research is in applied and computational mathematics, with a particular emphasis on models of detonation in reactive flow. Schwendeman works with a team, including researchers at Lawrence Livermore and Los Alamos National Laboratories, to study mathematical models that describe the initiation, propagation, and possible failure of detonation waves in condensed-phase (solid) explosives.  Schwendeman’s principal contribution in this effort has been in the development and implementation of adaptive and parallel numerical methods to obtain well-resolved solutions of the models to help uncover the complex behavior of these reactive materials.

“There are a lot of issues: what does it take to initiate a detonation wave? Once the detonation is created, how does it propagate? How does the detonation respond to changes in the geometry of the explosive and its confining material? Can the detonation fail?” said Schwendeman. “All of these questions have important implications in applications from demolition and construction, mining applications, handling old stockpiles of explosives, and military applications.”

Since 1993, he has also been instrumental in the MPI Workshop–an annual meeting founded at Rensselaer in 1985, and since expanded to include several participating universities. Through the workshop, students and faculty have put the power of applied mathematics to work solving real-world problems identified by industry partners, including Corning, GE Global Research, Standard & Poor’s, Gore, and Pall Corporation. MPI is part of a worldwide network of workshops that link scientists and engineers from industry with applied mathematicians from universities and national laboratories.

In 2004, Schwendeman created the Graduate Student Mathematical Modeling Camp, a four-day training session that provides graduate students with problem-solving experience prior to attending the MPI Workshop.  Over 250 students from universities in the U.S., U.K. and Canada have participated in the program, which receives support from the NSF, as well as from Rensselaer.

Schwendeman joined Rensselaer in 1987 as an assistant professor. He received his Ph.D. in applied mathematics from the California Institute of Technology and B.S.E in aerospace engineering from the University of Michigan. Schwendeman is a longtime member of the Society for Industrial and Applied Mathematics, has authored numerous articles in well-respected journals, and was the recipient of a NSF Presidential Young Investigator Award.