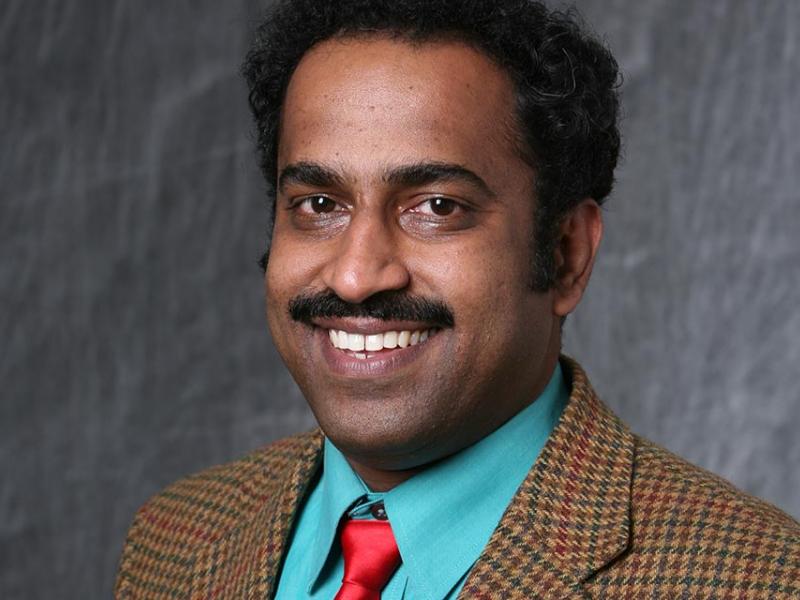 Nanomaterials expert Ganpati Ramanath, professor in the Department of Materials Science and Engineering.

Given in recognition of Ramanath’s research record and accomplishments in the fields of nanomaterials and interfaces, the award includes an invitation to meet the president of Germany, and to spend up to one year in the country as a visiting scholar at research institutions to collaborate on long-term research projects.

The award citation reads: “Prof. Dr. Ganpati Ramanath is an international leader renowned for his outstanding research in the fields of science and engineering of nanomaterials and interfaces. His seminal contributions include the discovery of new molecularly directed approaches to synthesize inorganic nanomaterials and tailor their interfaces, and the unearthing of atomistic structure-chemistry-processing-property relationships, to realize novel materials and properties for energy and electronics.”

The Humboldt Foundation grants only up to 25 Friedrich Wilhelm Bessel Research Awards annually. The honor is reserved for scientists and scholars who are internationally renowned in their fields, who completed their doctorates less than 18 years ago, and who are expected to continue producing leading-edge achievements that will have a seminal influence on their discipline beyond their immediate field of work, according to the foundation.

Ramanath is a professor in the Department of Materials Science and Engineering at Rensselaer.

“We congratulate Dr. Ramanath for being selected to receive the Friedrich Wilhelm Bessel Research Award. This is an impressive and important recognition of his research accomplishments and the international stature he has attained in his field. Professor Ramanath’s career is one of outstanding scholarship and high-impact research discoveries, and we are thrilled the Alexander von Humboldt Foundation has chosen to recognize him with this prestigious award,” said David Rosowsky, dean of the School of Engineering at Rensselaer. “We are honored to have researchers of Dr. Ramanath’s stature among our faculty in the School of Engineering”

Known throughout the global materials science and engineering community as a leader and innovator, Ramanath’s research focuses on nanostructured materials and interfaces for applications in electronics and energy. His investigations include the development of new types of materials and thin films through directed synthesis and assembly, as well as the creation of molecularly tailored interfaces with novel or unique properties. Ramanath’s recent discoveries include a new class of thermoelectric nanomaterials built from assemblies of sculpted nanostructures for high-efficiency solid-state refrigeration and electricity harvesting from waste heat, along with nanomolecular layers of “nanoglue” that can join non-sticking materials, inhibit chemical intermixing, and boost thermal transport. His work has been featured internationally by many news organizations, including Thompson Reuters, Scientific American, MSNBC, Discovery Channel, PC World, EETimes, MIT Technology Review, CNET, Science Daily, and others.

A prolific researcher, Ramanath has published 145 referred articles in journals, including Nature, Science, Nature Materials, Advanced Materials, and many others. His work has been cited more than 3,500 times and yielded seven patents. Over the past 10 years, he has secured more than $9 million in funding from agencies including the National Science Foundation (NSF), U.S. Department of Energy, U.S. Department of Defense, New York state, Semiconductor Research Corporation, the Office of Naval Research, as well as many companies including IBM, Intel, Novellus, and Honda.

Ramanath is the recipient of an NSF Faculty Early Career Development (CAREER) Award, the Brahm Prakash Visiting Professorship at the Indian Institute of Science, the Bergmann Memorial Young Scientist Award from the United States-Israel Binational Science Foundation, a co-recipient of an IBM Research Partnership Award, and several other honors. He served as the Alexander von Humboldt Fellow at the Nanoscale Science Department of the Max Planck Institute für Festkörperforschung in Germany, and has been a visiting professor at the International Center for Young Scientists, the National Institute of Materials Science in Japan, the Indian Institute of Science, and the Institute for Superconducting and Electronic Materials at University of Wollogong, Australia. Ramanath is an associate editor of IEEE Transactions on Nanotechnology, and is on the editorial advisory board of the Journal of Experimental Nanoscience and the Open Materials Science Journal.

Ramanath received his doctoral degree in materials science and engineering in 1997 from the University of Illinois at Urbana-Champaign, his master’s degree in materials science and engineering from the University of Cincinnati, and his bachelor’s degree in metallurgical engineering from the Indian Institute of Technology Madras. Prior to joining the Rensselaer faculty as an assistant professor in 1998, Ramanath served as a staff member at Novellus Systems in California and a visiting scientist in the Department of Physics at Linköping University, Sweden. He was promoted to a tenured associate professor in 2003, and full professor in 2006. He served as the director of the Rensselaer Center for Future Energy Systems, a New York State Center for Advanced Technology, from 2008 to 2010.