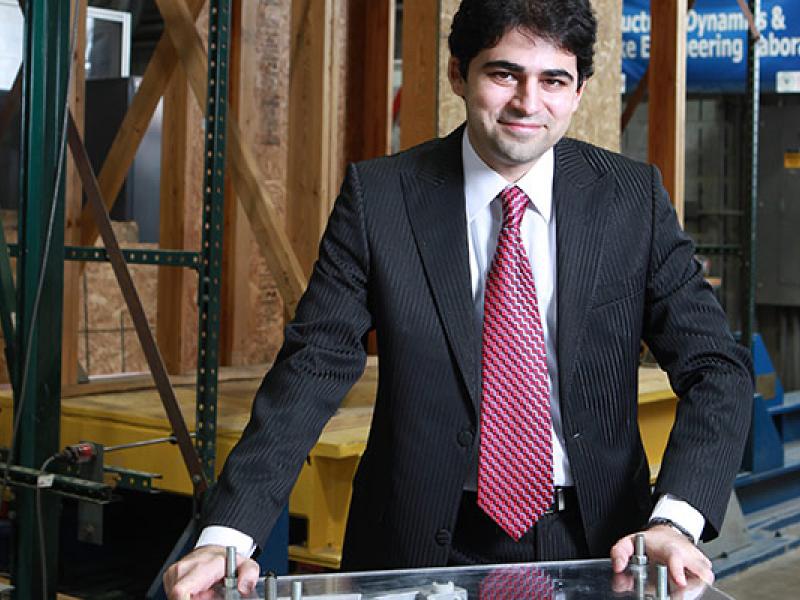 Navid Attary, student in the Department of Civil and Environmental Engineering.

New York City is drowning in packages
Rensselaer Announces Institute for Data, Artificial Intelligence, and Computing
Computer Culture Emerged in Canada Through Convergence of Unique History and Governmental Policies
The delivery market is coming down from its pandemic highs
Rensselaer Polytechnic Institute Class of 2022 Encouraged To Change the World
February 26, 2013

Navid Attary Is One of Three Finalists for the $30,000 2013 Lemelson-Rensselaer Student Prize

Navid Attary has created a seismic protection device to boost the resiliency of bridges and buildings to earthquakes. His innovation, which uses a new and novel method to dissipate the destructive forces of earthquakes, could help save countless lives and prevent billions of dollars of damage around the world every year.

Attary, a student in the Department of Civil and Environmental Engineering at Rensselaer Polytechnic Institute, is one of three finalists for the 2013 $30,000 Lemelson-Rensselaer Student Prize. A public ceremony announcing this year’s winner will be held at 3:30 p.m. on Tuesday, March 5, in the auditorium of the Rensselaer Center for Biotechnology and Interdisciplinary Studies. For more information on the ceremony visit: http://www.eng.rpi.edu/lemelson

Individuals in every corner of the world know of the danger presented by earthquakes. Hundreds of seismic events occur without incident every day, but powerful temblors can throw a city, region, or entire nation into upheaval in a matter of seconds. Potent examples are the 2011 Tohoku earthquake in Japan, which resulted in an estimated 15,000 deaths, 45,000 destroyed buildings, and $300 billion in damage. A year earlier, the 2010 Haiti earthquake caused an estimated 316,000 deaths, with 250,000 residencies, and 30,000 commercial buildings collapsed or destroyed.

It is beyond humanity’s ability to prevent earthquakes, but structural and earthquake engineers throughout history have developed strategies for strengthening structures and reducing the damage dealt by earthquakes. For reducing damage, most seismic protection systems used today work by dissipating, or damping, the energy created by quakes. Passive dampers are not unlike shock absorbers in automobiles, and they usually feature a cylinder containing fluid and a piston that drives the fluid through the device. This helps redirect earthquake energy from the frame of the building or bridge to the damping device, which then harmlessly dissipates the energy in the form of heat.

While reliable and long-lived, these passive dampers have limited effectiveness because they cannot adapt to each earthquake’s unique movement patterns. Active dampers are smarter and able to respond to many different types of movement, but these electronic devices are expensive to maintain, and cease to function if power is lost during an earthquake.

Attary’s solution to this problem was to create a new type of seismic protection device that adapts to different types of movement, but requires no electricity and no expensive maintenance. He invented a rotation-based mechanical adaptive passive device, or RB-MAP, which is comprised of a meticulously engineered collection of gears, pre-torqued springs, and damping devices that can be installed underneath a bridge or inside the wall of a building. The RB-MAP takes advantage of a concept called “negative stiffness” to reduce the earthquake energy transferred into the structure. The RB-MAP can passively adapt to different types of earthquakes, as specific movements will cause selective engagement or disengagement of the gears and the damping device.

Initial testing has shown that Attary’s RB-MAP can reduce the force in structures during earthquakes by up to 60 percent. The device is inexpensive to build, and small and compact enough to be practical to install inside structures. Overall, Attary’s patent-pending technology could open the door to a new generation of seismic protection devices that help save lives and minimize destruction during earthquakes.

Attary was fascinated with physics and waves in high school, and became interested in earthquake engineering and waves following the tragic 2003 Bam earthquake in his home country of Iran.

When not in the lab or classroom, Attary is spending time with his wife, Maryam, and their newborn daughter, Atefeh. In his hometown of Karaj in Iran, not far from Tehran, Attary’s father, a retired botany professor, and his mother, a retired high school science teacher, as well as his older brother and younger sister, are all cheering for him to win the $30,000 Lemelson-Rensselaer Student Prize.

In his time at Rensselaer, Attary has been the co-author of several conference papers on this topic and has presented his research at major research conferences. Additionally, for his RB-MAP research and efforts, Attary was named one of 10 winners of the 2012 Rensselaer “Change the World Challenge” competition. Last year he was also named the winner of the 2012 Rensselaer Founders Award of Excellence, which recognizes students who “embody qualities of creativity, discovery, leadership, and the values of pride and responsibility at Rensselaer.” The Founders Award is one of the highest honors bestowed to students at Rensselaer.

Attary received his bachelor’s degree in civil engineering from the Iran University of Science and Technology, and his master’s degree in civil engineering from the University of Tehran. Upon completing his doctoral degree from Rensselaer, Attary plans to commercialize his RB-MAP technology and seek out a faculty position at a research university.