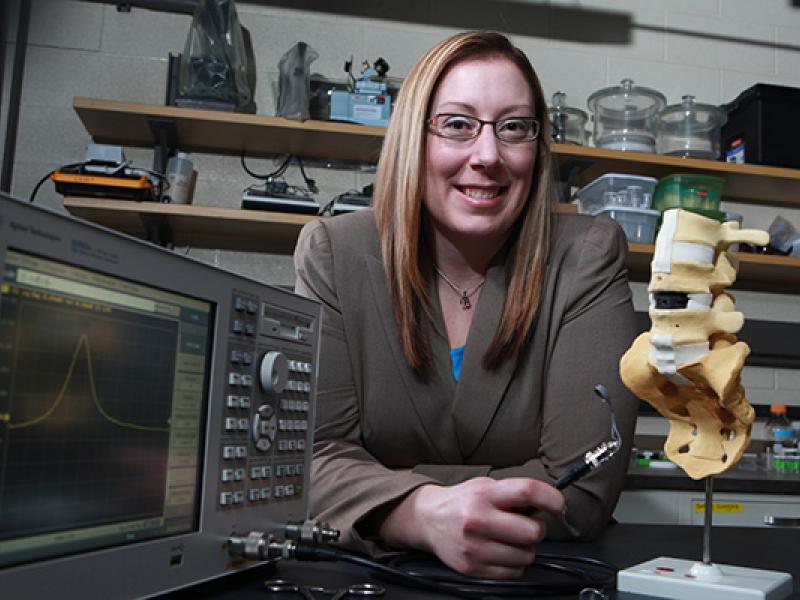 Rebecca Wachs Is One of Three Finalists for the $30,000 2013 Lemelson-Rensselaer Student Prize

Rebecca Wachs has invented a new implantable sensor with the ability to wirelessly transmit data from the site of a knee replacement, spinal fusion, or other orthopedic surgery. Simple, robust, and inexpensive to make, her sensor holds the promise of advancing personalized medicine by giving doctors an unprecedented wealth of information about how an individual patient is healing.

Wachs, who in January earned her doctoral degree in biomedical engineering from Rensselaer Polytechnic Institute, is one of three finalists for the 2013 $30,000 Lemelson-Rensselaer Student Prize. A public ceremony announcing this year’s winner will be held at 3:30 p.m. on Tuesday, March 5, in the auditorium of the Rensselaer Center for Biotechnology and Interdisciplinary Studies. For more information on the ceremony visit: http://www.eng.rpi.edu/lemelson

Wachs’ project is titled “Enabling Personalized Medicine Through an Elementary and Robust Implantable Sensor.” Her adviser is Eric Ledet, professor in the Department of Biomedical Engineering at Rensselaer.

Researchers have endeavored since the 1960s to extract information from sensors implanted in the body. Nearly all of the solutions, however, have been hampered by the requirement of complex electronics, antennas, frequent modifications to the implant, or the need for external power sources such as batteries. The devices end up being impractical and too expensive. Because of these limitations, surgeons today usually rely on X-rays or MRIs to monitor the progress of their patient’s recovery following an orthopedic procedure. Most diagnoses therefore rely on subjective observation instead of objective data.

This is significant because more than 500,000 total knee replacements and 400,000 spinal fusion procedures are performed every year in the United States. Overall, musculoskeletal conditions result in 500 million lost work days annually, at an estimated cost of nearly $375 billion.

Wachs’ patent-pending solution to this challenge was to create a simple, practical sensor to provide rich, objective data on which to make diagnoses about surgery sites. She invented a wireless sensor that needs no battery, no external power, and requires no electronics within the body. Instead, the sensor is powered by an external device, which is also used to capture the sensor data.

Measuring only 4 millimeters in diameter and 500 microns thick, the wireless sensors look like small coils of wire and are attached to commonly used orthopedic musculoskeletal implants such as rods, plates, or prostheses. Once in the body as part of the implant, the sensor can monitor and transmit data about the load, strain, pressure, or temperature of the healing surgery site. The sensor is scalable, tunable, and easy to configure so that it may be incorporated into many different types of implantable orthopedic devices.

Additionally, the sensors could prove valuable during the actual surgery procedure to implant the prosthetic device. In real time, surgeons could get objective data to help guide their decisions about the correct sizing and placement of the prosthetic they are implanting in the patient.

Overall, Wachs’ invention could give surgeons the opportunity to make surgical decisions and post-operative diagnoses for individual patients based on objective, personalized, and real-time data. Her sensors are simple and inexpensive to produce, require no external power source, yet are robust and durable. The data produced by these sensors should arm physicians with powerful new information for determining when recovering patients are able to return to work without a risk of further injury.

When not in the lab or classroom, Wachs likes to play soccer, cook, and entertain friends and family. She is also an avid reader and likes to discuss what she’s reading with fellow members of her book club.

Wachs’ husband, Bobby Wachs, and their dog, Maggie, are cheering for her to win the $30,000 Lemelson-Rensselaer Student Prize. In her hometown of Guilderland, N.Y., Wachs’ father, an accountant, and mother, a nurse, are also rooting for Wachs, as are her two sisters.