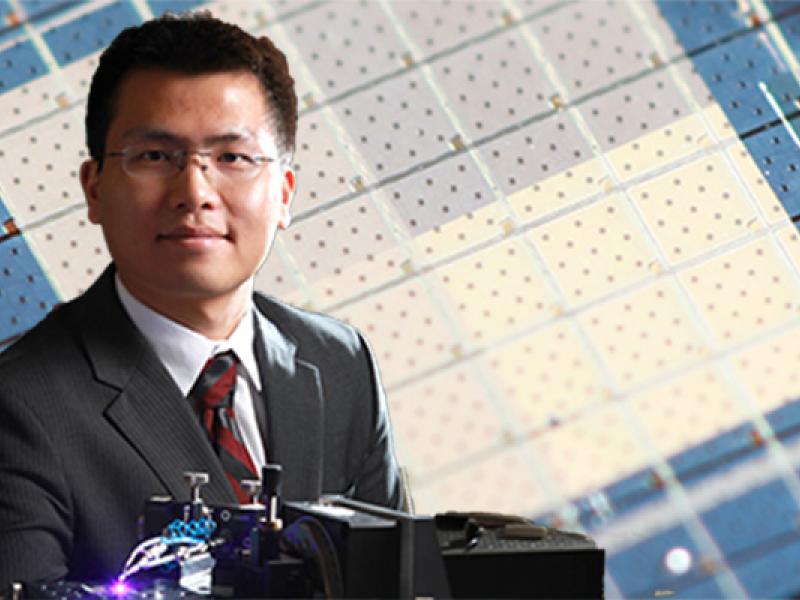 Ming Ma, a doctoral student in the Department of Materials Science and Engineering, has been named the winner of the prestigious 2013 $30,000 Lemelson-Rensselaer Student Prize.

Rensselaer Polytechnic Institute student Ming Ma has developed a new method to manufacture light-emitting diodes (LEDs) that are brighter, more energy efficient, and have superior technical properties than those on the market today. His patent-pending invention holds the promise of hastening the global adoption of LEDs and reducing the overall cost and environmental impact of illuminating our homes and businesses.

“For more than 175 years, Rensselaer has produced some of the world’s most successful engineers and scientists, explorers and scholars, innovators and entrepreneurs. Doctoral student Ming Ma, with his groundbreaking invention of GRIN LEDs, honors and continues this tradition of excellence,” said David Rosowsky, dean of the School of Engineering at Rensselaer. “Rensselaer and the School of Engineering offer a hearty congratulations to Ming for his achievement. We also applaud all of the winners, finalists, and entrants of the Lemelson-MIT Collegiate Student Prize for using their talent and passion to engineer a better world and a better tomorrow.”

Ma is the seventh recipient of the Lemelson-Rensselaer Student Prize. First given in 2007, the prize is awarded annually to a Rensselaer senior or graduate student who has created or improved a product or process, applied a technology in a new way, redesigned a system, or demonstrated remarkable inventiveness in other ways.

“Invention is critical to the U.S. economy. It is imperative we instill a passion for invention in today’s youth, while rewarding those who are inspiring role models,” said Joshua Schuler, executive director of the Lemelson-MIT Program. “This year’s Lemelson-MIT Collegiate Student Prize winners and finalists from the Massachusetts Institute of Technology, Rensselaer Polytechnic Institute, and the University of Illinois at Urbana-Champaign prove that inventions and inventive ideas have the power to impact countless individuals and entire industries for the better.”

For videos and photos of Ma and other award finalists, please visit: www.eng.rpi.edu/lemelson

One solution that has emerged is to roughen the surface of LEDs, in order to create nanoscale gaps and valleys that enable more light to escape. While surface roughening leads to brighter and more efficient light emission, the roughening process creates random features on the LED’s surface that do not allow for a complete control over other critical device properties such as surface structure and refractive index.

Freeing Trapped Light with GRIN LEDsMa’s solution to this problem was to create an LED with well-structured features on the surface to minimize the amount of light that gets reflected back into the device, and thus boost the amount of light emitted. He invented a process for creating LEDs with many tiny star-shaped pillars on the surface. Each pillar is made up of five nanolayers specifically engineered to help “carry” the light out of the LED material and into the surrounding air.

Ma’s patent-pending technology, called GRIN (graded-refractive-index) LEDs, has demonstrated a light-extraction efficiency of 70 percent, meaning 70 percent of light escaped and only 30 percent was left trapped inside the device—a huge improvement over the 25 percent light-extraction efficiency of most of today’s unprocessed LEDs. In addition, GRIN LEDs also have controllable emission patterns, and enable a more uniform illumination than today’s LEDs.

Overall, Ma’s innovation could lead to entirely new methods for manufacturing LEDs with increased light output, greater efficiency, and more controllable properties than both surface-roughened LEDs and the LEDs currently available in the marketplace.

Impactful ResearcherMa joined Rensselaer in 2008 as a member of Professor E. Fred Schubert’s research team. In his time at Rensselaer, Ma has been the first author on five research papers, published in Applied Physics Letters, Journal of Applied Physics, and Optics Express, and co-author of several studies in other journals. He is also a reviewer for Optics Letters and Optics Express.

“Ming Ma is an outstanding student—strongly motivated, creative, intelligent, and highly skilled,” said Schubert, the Wellfleet Senior Professor in the Future Chips Constellation at Rensselaer and a faculty member of the university’s Department of Electrical, Computer, and Systems Engineering and Department of Physics, Applied Physics, and Astronomy. “Ming’s technical accomplishments are innovative, and have had a significant impact on the LED materials research community. The innovation of GRIN LEDs should not be underestimated—Ma’s invention is the first viable approach for high-efficiency LEDs with a controllable far-field emission pattern. This is an important development for LED lighting, and it is already capturing the attention of industry.”

Growing up in Jiangxi Province in southeast China, Ma fostered an early love of science. This fascination was fostered by his father, a newspaper editor, and his mother, a mechanical engineer at a pharmaceutical manufacturer. Ma became interested in advanced materials as an undergraduate student at Fudan University in Shanghai, which inspired him to study LEDs as a graduate student at Rensselaer.

Upon completing his doctoral degree from Rensselaer later this year, Ma plans to continue researching materials and LEDs in academia or industry.