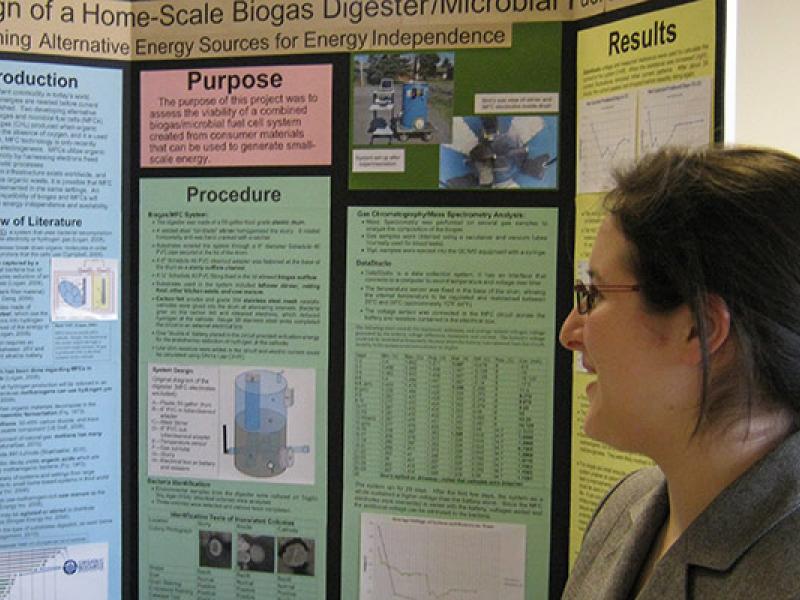 More than 100 Capital Region middle and high school students  will participate in the 23rd annual Greater Capital Region Science and Engineering Fair Saturday, March 23. The daylong event will be held on the Rensselaer Polytechnic Institute campus in the Walker Laboratory building.

“We are excited to have these young researchers exploring their passion for discovery at Rensselaer,” said Laurie Leshin, dean of the School of Science. “I look forward to welcoming some of them to Rensselaer as students in the years to come. Their future success will ultimately drive continued innovation and prosperity in the Capital Region, New York state and the nation.”

Students from area public and private schools and home-schooled children may participate in the fair if they live in one of the following counties: Albany, Columbia, Greene, Fulton, Hamilton, Montgomery, Orange, Rensselaer, Rockland, Saratoga, Schenectady, Schoharie, Ulster, Washington, or Warren. The fair has two divisions. The junior division is for students in grades 6-8 and the senior division is for grades 9-12.

Working alone or in teams of up to three individuals, students will showcase their latest research in areas that include: energy and transportation, materials and bio-engineering, behavioral and social sciences, microbiology, chemistry, plant sciences, medicine and health sciences, cellular and molecular biology, electrical and mechanical engineering, animal sciences, environmental management, earth science, and physics and astronomy.

Sample student projects include: The Effect of the Deer Population on the Emerald Ash Borer Population in New York State; Beat the Bacterial Heat: Is Antibiotic Resistance Prominent in Bacteria in Concentrated Bathroom Hand Dryers; Does Elevation Effect the pH level in Soil; A Study on the Durability of Varying Flood Wall Structures; The Effect of Washing on Flame Retardant Clothing; The Effect of Energy Drinks on Crickets Metabolism; Is Fertilizer Necessary for Growth; Germ Busters; Mouth Germs; Solar is the Solution; Physics in Video Games and Animation.

Additional projects include: How to Make the Most Effective Salt Water Fuel Cell Module; Investigating the Roles of BRIGHT and BAP-135 in the Survival of Breast Cancer Cells; The Effect of Physical Activity on the Anxiety of Public Speaking; The Impact of Technology in the Workplace; Military Family Stresses Caused by Parent Deployment; Can Pomegranates Prevent Human Pancreatic Cancer; The Link Between Concussions and ALS and the Brain; The Effects of Sports Drinks on Adolescent Obesity: Music Therapy and Its Effect on Behavior Skills in Children with Autism; and The Effect of Aging on Neural Stem Cells and Neural Cell Death.

“This is a wonderful opportunity to share students’ passion for science, technology, engineering, and mathematics (STEM) disciplines and to be recognized for their endeavors,” said STANYS Fair Director Joan Wagner. “Students are encouraged to focus on original research by working with mentors and/or teachers from the scientific community at large within the greater Capital Region. STANYS promotes excellence in science education. Its mission is to work with educators and communities to provide opportunities for all students to participate in and learn science.”

Wagner also noted that students will use a storyboard to present their research to judges, who are all scientists and engineers. “In coordinating this event, we’ve found that when students do original research, they learn what science entails. Who knows, perhaps a new cure for cancer, innovative approaches to alternative energy, or a new device to help the handicapped may be solved by the work of these students as they pursue their science careers.”

“Please join me in congratulating the students who have devoted much time and energy to their projects.  They will be the leaders of the future in science,” said Samuel Wait Jr., former associate dean of the School of Science and professor emeritus of chemistry at Rensselaer, who has served as a judge for fair. “I also wish to thank the parents, teachers and mentors, and schools who made the students’ participation possible.”

This year, one of the participating “research rockstars” is Samantha Scibelli, a senior from Burnt Hills–Ballston Lake High School. Scibelli is one of 40 high school seniors in the country who will present her astronomy project at the Intel Science Talent Search in Washington, D.C., in March.

Judging is coordinated by Matt Nielson, a GE physicist. A majority of the judges come from GE Global Research. Major supporters for the fair include Albany College of Pharmacy and Health Sciences, GE, Momentive Performance Materials, and Pitney Bowes.

Program OverviewThe program will begin at 9 a.m. with opening remarks to be delivered by Joan Wagner in Russell Sage Auditorium, room 3303. Throughout the morning and early afternoon, judges will review the projects. The student projects will also be available for public viewing from 2:30 to 4 p.m.

Beginning at 4:15 p.m., Leshin will provide the keynote address that will focus on the Mars Rover Curiosity. The lecture will also take place in Russell Sage Auditorium, room 3303.The Fair ResultsImmediately following the keynote address, the awards ceremony will take place. The top winners in the Junior Division (grades 6-8) may be eligible to enter the new Broadcom Masters National Competition for students in grades 6-8, and the STANYS State Science Congress fair that will be held at Brookhaven Labs from June 8-10.

The three top grand prize winners in the Senior Division (grades 9-12) will also be eligible to compete in the 63rd Intel International Science and Engineering Fair (ISEF) in Phoenix, Ariz., from May 12-17. Three additional grand prize winners will be invited to attend the STANYS State Science Congress. The Intel ISEF is the world’s largest pre-college celebration of science, bringing together over 1,600 students from approximately 66 counties. The fair showcases the world’s most promising young scientists, who through scientific investigation are developing ideas and inventions that will change the world. ISEF offers over $4 million in prizes. Of special note, a number of students who competed in this competition have gone on to become Nobel Laureates.

Rensselaer will award a $40,000 scholarship to an outstanding project for a student enrolled in grades 9-11, if they are accepted and choose to enroll at Rensselaer. The Albany College of Pharmacy and Health Sciences will offer up to three $20,000 scholarships. The grand prize monetary awards are provided by the Rensselaer School of Science. Additional awards are provided to students from professional organizations and the armed forces.