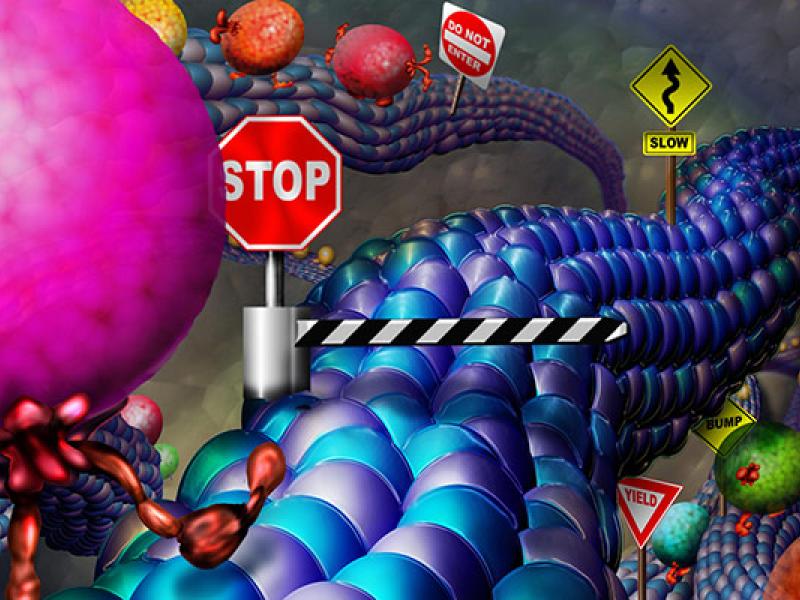 The interior of every cell within our bodies is crisscrossed with a network of molecular highways upon which nutrients, replacement parts, and other vital materials travel to their appropriate location. The system is immensely complex, and wrong turns are among the cellular malfunctions observed in connection with diseases like Alzheimer’s, amyotrophic lateral sclerosis (ALS or Lou Gehrig’s Disease), and polycystic kidney disease.That much is known. But the road signs that direct traffic on the highways – collectively known as the cytoskeleton — are a mystery, and now the subject of research for Lee Ligon, associate professor of biology at Rensselaer Polytechnic Institute.Ligon has been awarded a five-year $1.5 million grant from the National Institutes of Health to unravel one thread of the mystery, testing whether a particular feature scientists have observed on the molecular highways  — called “microtubules” — could be serving as a directional sign for traffic. Misdirected traffic results in long delays in the delivery of vital intercellular cargo, particularly in nerve cells that extend the full length of the body, and has been observed in conjunction with several neurodegenerative diseases.“This is a really fundamental project to understand the basic mechanisms of how cells work, and it has ramifications for lots of diseases,” Ligon said. “This is basic science, and a lot of the really groundbreaking changes in the way we approach various diseases have started out as these basic science findings.”Ligon’s research will focus on microtubules, one of three sets of structural proteins — microtubules, actin filaments, and intermediate filaments — which make up the cytoskeleton. As their name suggests, microtubules are hollow tubes, each tube composed of 13 separate strings of “protofilaments” joined side by side to form a tube.“Microtubules are long filaments, hollow like a straw, and with a certain degree of structural rigidity, like girders in a building. They start in the middle of the cell, near the nucleus, and they extend to the outside of the cell,” Ligon said. “We’re looking for things that make the microtubules different from one another, things that could serve as road signs along the way.”The surface of a microtubule is textured with a series of evenly spaced bumps. Molecular “motors” carrying various cargo use repeated chemical reactions to travel from one bump to the next, moving along the length of the microtubule. Scientists already know that the bumps are not symmetrical, giving the “road” a different surface profile in each direction. The motors must be shaped appropriately for the surface of the road, and motors that can travel in one direction have a different shape from motors that can travel in the reverse direction. This polarity seems to be one of the main navigational markers in the system.But, Ligon said, the shape of the individual bumps can also be altered on the fly, which may allow the cell to re-route cargo while it is in transit, if necessary.“We think that these modifications are one of the key ways that the cell coordinates its traffic – sending different cargoes to different parts of the cell,” Ligon said. “To use an analogy, the street signs seem to be changing depending on where the cell needs traffic to go. That may be giving the cell a way to respond to a changing environment.”Ligon believes that another road sign may be in the form of modifications seen on the inside of the microtubule.“Most of the modifications we see on microtubules are on the surface of the straw, but there’s one in the middle of the straw that’s just completely baffled people for decades,” Ligon said. “This particular modification is highly conserved evolutionarily, which means it’s in cells from giardia (a single celled intestinal parasite) to people, and that suggests it’s important. But people have not been able to identify what it’s doing. We have some ideas. We think it might be affecting the structure of the microtubule itself, which could then directly affect how the motors walk on them.”Ligon said the modifications are always changing in the cell, depending upon what the cell is doing.“We think that suggests they are somehow controlling traffic,” Ligon said. “So, we want to alter these road signs and ask ‘does that affect whether the traffic gets to the right place?’”The grant, titled “Remodeling the Microtubule Cytoskeleton for Polarized Treatment,” will fund research through 2017. Ligon is a member of the Center for Biotechnology and Interdisciplinary Studies and the Department of Biology at Rensselaer.