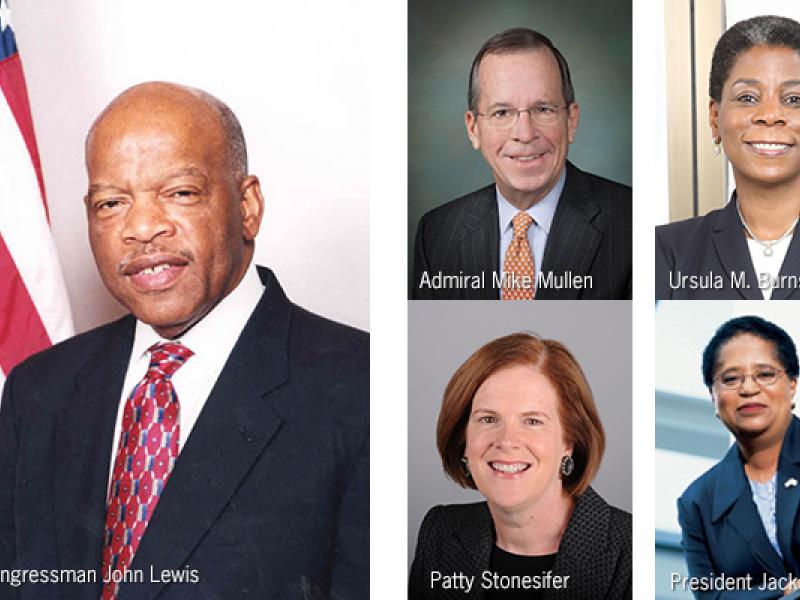 U.S. Representative John Lewis (D-GA) — one of the nation’s most dedicated and courageous civil rights leaders — will address Rensselaer Polytechnic Institute graduates at the 207th Commencement May 25, 2013. He will join a group of high-level business, military, and nonprofit foundation leaders who will participate in the graduation ceremonies.

“Congressman Lewis is indeed a ‘profile in courage,’ an extraordinary example of the power of an individual to change the world,” President Jackson said. “At about the same age as our students, he stood up for what was right by sitting down at lunch counters, walking across a bridge in Selma, and marching on Washington. In doing so, with a persistent commitment to non-violence, he helped lead our nation through the civil rights era to a new day. Long considered the ‘conscience of the U.S. Congress,’ for more than a half century he has remained steadfast in his pursuit of equality, justice, and fairness for all. We are honored to have this Presidential Medal of Freedom recipient and true American hero address the graduates at Rensselaer.

“We also look forward to honoring and hearing from three other influential leaders in corporate America, the military, and the foundation and nonprofit sectors,” President Jackson added. “As chairman and CEO of Xerox, Ursula Burns has led the transformation of a Fortune 500 company, and the conversation on the importance of inviting young people to pursue math and science careers. As former Chairman of the Joint Chiefs of Staff, Admiral Mike Mullen guided the U. S. armed services through a shift in mission and in culture. As Chair of the White House Council on Community Solutions, and a pioneer in Microsoft and the Bill & Melinda Gates Foundation, Patty Stonesifer has remained focused on creating access, reducing inequities, and expanding opportunities for others. Each has been global in reach and profound in impact, and we are honored by their participation in our Commencement.”

Congressman John Lewis:Before he was elected to the U.S. House of Representatives for the Fifth Congressional District in Georgia in 1986, Lewis compiled an impressive track record that led many civil and human rights leaders to call him one of the most courageous persons the civil rights movement ever produced. Roll Call magazine once said, “John Lewis…is a genuine American hero and moral leader who commands widespread respect in the chamber.”

As a young man from Troy, Ala., Lewis was inspired by the activism surrounding the Montgomery Bus Boycott and the words of the Rev. Martin Luther King, Jr. As a student at Fisk University, Lewis organized sit-in demonstrations at segregated lunch counters in Nashville. During the height of the civil rights movement, from 1963 to 1966, Lewis was named chairman of the Student Nonviolent Coordinating Committee (SNCC), which he helped form. SNCC was largely responsible for organizing student activism in the movement.

While still a young man, John Lewis became a nationally recognized leader. By 1963, he was dubbed one of the “Big Six” leaders of the civil rights movement. At the age of 23, he was an architect of and a keynote speaker at the historic March on Washington in August, 1963.

In 1964, Lewis coordinated SNCC efforts to organize voter registration drives and community action programs during the Mississippi Freedom Summer. The following year, Lewis helped spearhead one of the most seminal moments of the civil rights movement.  Hosea Williams, another notable civil rights leader, and Lewis led more than 600 peaceful, orderly protestors across the Edmund Pettus Bridge in Selma, Ala., on March 7, 1965, intending to march from Selma to Montgomery to demonstrate the need for voting rights. The marchers were attacked by Alabama state troopers in a brutal confrontation that became known as “Bloody Sunday,” which helped hasten the passage of the Voting Rights Act of 1965.

After leaving SNCC in 1966, he continued his commitment to the civil rights movement as associate director of the Field Foundation and his participation in the Southern Regional Council’s voter registration programs. Lewis went on to become the director of the Voter Education Project. In 1977, Lewis was appointed by President Jimmy Carter to direct more than 250,000 volunteers of ACTION, the federal volunteer agency.

Lewis holds a bachelor of arts degree in religion and philosophy from Fisk University, and he is a graduate of the American Baptist Theological Seminary, both in Nashville.

He is the recipient of numerous awards from national and international institutions, including the highest civilian honor granted by President Barack Obama—the Medal of Freedom, the Lincoln Medal from the historic Ford’s Theatre, the Golden Plate Award given by the Academy of Excellence, the Preservation Hero award given by the National Trust for Historic Preservation, the Capital Award of the National Council of La Raza, the Martin Luther King, Jr. Non-Violent Peace Prize, the President’s Medal of Georgetown University, the NAACP Spingarn Medal, the National Education Association Martin Luther King, Jr. Memorial Award, and the only John F. Kennedy “Profile in Courage Award” for Lifetime Achievement ever granted by the John F. Kennedy Library Foundation.

Lewis is the author of a new book titled Across That Bridge: Life Lessons and a Vision for Change (2012), and his biography is titled Walking With The Wind: A Memoir of the Movement (1998).

Retired Joint Chiefs of Staff Chairman Admiral Mike Mullen:Admiral Mullen graduated from the U.S. Naval Academy in 1968, and received a master of science degree in operations research from the Naval Postgraduate School and completed the Advanced Management Program at Harvard Business School.

He served as the 17th Chairman of the Joint Chiefs of Staff, from 2007 until 2011. He was the principal military adviser to President George W. Bush and President Barack Obama, as well as two Secretaries of Defense.

He led the military during a critical period of transition, overseeing the end of the combat mission in Iraq and the development of a new military strategy for Afghanistan. He advocated for the rapid development and fielding of innovative technologies, championed emerging and enduring international partnerships, and advanced new methods for combating terrorism – all of which directly culminated in the operation which targeted Osama bin Laden.

As Joint Chiefs Chairman, he spearheaded the repeal of “Don’t Ask, Don’t Tell.” In addition, he successfully led the matrix, consensus-based, complex organizational model of the Joint Chiefs of Staff.

Prior to becoming chairman of the Joint Chiefs, Mullen commanded at every level in the Navy, including three ships, an aircraft carrier battle group, and a fleet. His final four-star command was in Europe for NATO. His fleet experience culminated in his assignment as the Navy’s highest ranking officer, the 28th Chief of Naval Operations, from 2005 until 2007.

Xerox Chairman and CEO Ursula M. Burns:The first African-American woman to be named CEO of a Fortune 500 company, Burns earned a bachelor of science degree in mechanical engineering from Polytechnic University of New York University, and joined Xerox in 1980 as a mechanical engineering summer intern. She later assumed roles in product development and planning, as the company was securing its leadership position in digital document technologies. From 1992 through 2000, she led several business teams, including the company’s color business and office network printing business.

In 2000, Burns was named senior vice president, Corporate Strategic Services, heading up manufacturing and supply chain operations. Alongside then-CEO Anne Mulcahy, Burns worked to restructure Xerox through its turnaround to emerge as a leader in color technology and document services. In April 2007, Burns was named president of Xerox, expanding her leadership to also include the company’s IT organization, corporate strategy, human resources, corporate marketing, and global accounts. At that time, she also was elected a member of the company’s board of directors.

She was named chief executive officer in July 2009 and shortly after, made the largest acquisition in Xerox history, the $6.4 billion purchase of Affiliated Computer Services, catapulting the company’s presence in the $500 billion business services market and extending the company’s reach into diverse areas of business process and IT outsourcing. On May 20, 2010, Burns became chairman of the company.

In addition to the Xerox board, she is a board director of the American Express Corporation and Exxon Mobil Corporation. Burns also provides leadership counsel to community, educational, and nonprofit organizations, including FIRST – (For Inspiration and Recognition of Science and Technology), the National Academy Foundation, Massachusetts Institute of Technology, and the U.S. Olympic Committee. She is a founding board director of Change the Equation, which focuses on improving the U.S.’ education system in science, technology, engineering, and math. In March 2010, President Barack Obama appointed Burns vice chair of the President’s Export Council.

Microsoft and Bill & Melinda Gates Foundation Pioneer Patty Stonesifer: A longtime leader in the technology, foundation, and nonprofit arenas, Stonesifer is a graduate of Indiana University. She is president and CEO of Martha’s Table, a nonprofit organization in Washington, D.C., focused on providing food, nutrition, education and other support to help individuals and families break the cycle of poverty. She also advises business, nonprofit, and government leaders on strategies for reducing inequity. In 2012, she completed a three-year term as chair of the Smithsonian Institution Board of Regents.

In the 10 years prior, she was the founding CEO of the Bill & Melinda Gates Foundation. She continues to serve on the Smithsonian Board of Regents, as well as on the board of the National Museum of African American History and Culture. She is involved in several education efforts including America Achieves Advisory Board, Hope Street Group Advisor, Raise DC Executive Team, and Circle of Allies and Champions for the National Council of Youth Leaders.

In 2010, President Barack Obama appointed her as chair of the White House Council on Community Solutions, which was charged with identifying community-level solutions to address the nation’s biggest challenges. Other nonprofit boards on which Stonesifer has served include the Seattle Foundation, the GAVI Fund, One.org, the Seattle YWCA, the Center for Global Development, and the Broad Institute.

Before joining the Gates Foundation, Stonesifer spent two decades working in technology, culminating as senior vice president at Microsoft. She is on the corporate boards of directors of Amazon.com and Miraval Resorts, and formerly served on the boards of Alaska Airlines, Kinko’s, and Viacom.

Stonesifer served as a member of the U.S. delegation to the United Nations General Assembly Special Sessions on AIDS.

President Jackson To Lead May 24 Commencement Colloquy With the 2013 Honorands: “Leading Cultural Shifts: Courage, Creativity, Commitment” On the eve of Commencement, Rensselaer will convene for the 2013 President’s Commencement Colloquy. The honorands will participate in a discussion – titled “Leading Cultural Shifts: Courage, Creativity, Commitment” – led by President Jackson. The Colloquy, open to the Rensselaer community and the general public, will be held in the Concert Hall of the Curtis R. Priem Experimental Media and Performing Arts Center (EMPAC) on the Rensselaer campus, beginning at 4 p.m. on Friday, May 24.

For more details on Commencement, go to www.rpi.edu/academics/commencement/index.html