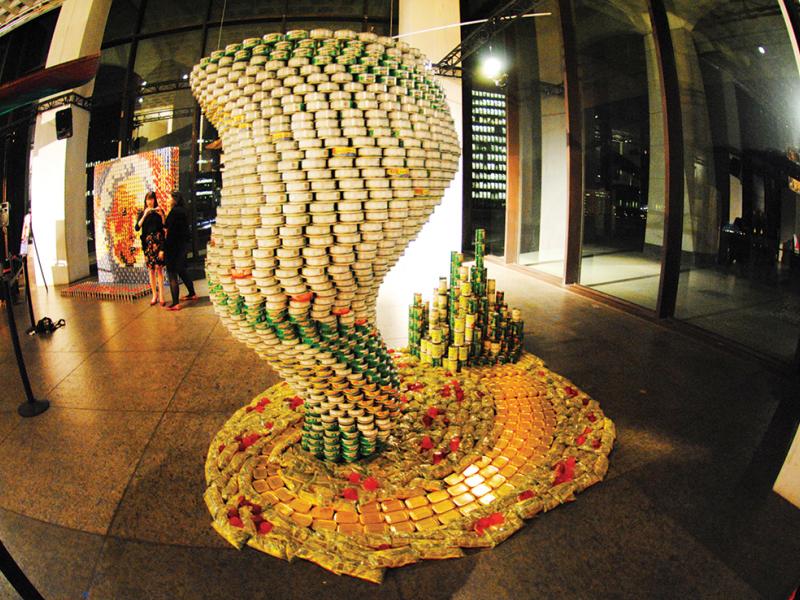 This year’s project is called "We’re not in CANsas Anymore". Photo by Tyler Hopf

Have you ever thought about the life-changing impact that a single can is able to make in the fight against hunger? Canstruction is an international charity competition in which architects, engineers, contractors, and students compete to design and build structures made entirely from cans of food. This year, a team of Rensselaer Polytechnic Institute architecture students took home the “Structural Ingenuity” award at the 2013 Canstruction event at the New York State Museum.

Canstruction was founded in 1992 and has since raised millions of pounds of food for food banks in participating cities across the world. Using the theme “Can You Imagine,” participants in the competition were challenged with creating logos that would speak to both this year’s theme and the goal of Canstruction: to feed local communities. At the close of the competition, all of the canned food is donated to local food banks in the areas where the competitions are held.

This year is the third year that the Capital Region has held a CANstruction competition and the second year a Rensselaer team participated. The team’s project, titled “We’re not in CANsas anymore,” has a Wizard of Oz theme complete with a swirling tornado, yellow brick road, and replica of the Emerald City.  The Rensselaer team raised more than $4,000 to donate 3,000 cans, over twice as much as last year, according to team caption Tyler Hopf, a senior in architecture.

“I think this is something myself and the rest of the students feel is a huge part of our time here in the area, and we will bring the spirit of the event with us wherever we end up,” Hopf said.

The Canstruction exhibition is on display at the New York State Museum until April 11. At the close of the exhibition, every can will be donated to the Food Pantries for the Capital District to help feed families in the Capital Region.

For more information, and to view previous canstructures, visit: www.capitalregioncanstruction.com.