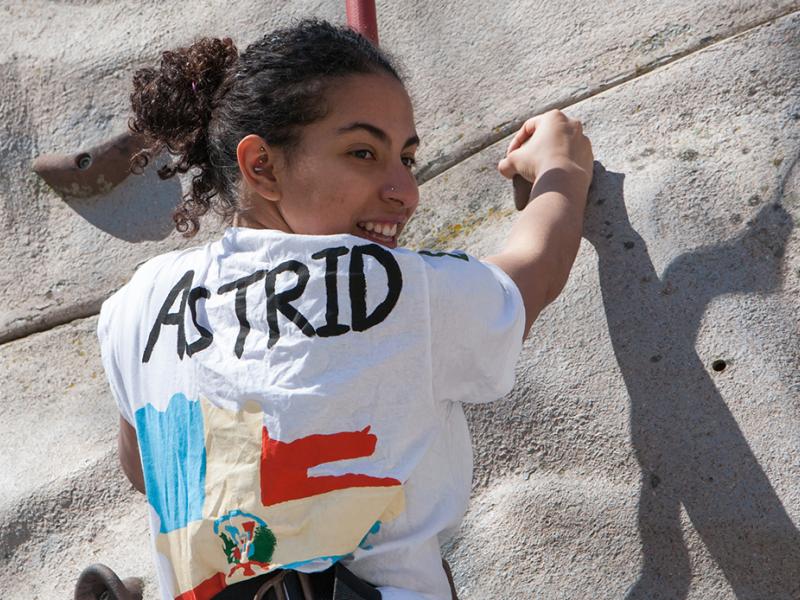 Grand Marshal Week has taken over part of campus with its “Rock Around the Block” neighborhood block party theme. For the duration of the event, the Voorhees Computing Center (VCC) outdoor quad space has been transformed into “GM Week Boulevard,” and is serving as the main location for the events.

How Rensselaer Students Manage and Run A Multimillion Dollar Enterprise

Many colleges and universities have programs to facilitate student leadership development — but sometimes it is difficult to pin down a concrete example that proves the point. At Rensselaer Polytechnic Institute, a prime example is the Rensselaer Union, a student-run, self-supporting, and self-governing body that controls, finances, and organizes student activities. Home to nearly 200 clubs, sports, and organizations, Rensselaer is also recognized as one of only 20 colleges and universities in the United States that operates its student union using this structure.

Grand Marshal Week, also known as GM Week, was established in 1865, when Major Albert M. Harper of Pittsburgh was elected and endowed with a ceremonial sword, as was fitting in a year of war. His function was to head and represent the entire student body on all occasions in all relations, thereby giving it a formal unity. Except for a few years during the 1890s, Grand Marshals were elected each year, usually in the spring, and this provided the culminating event of the student calendar.

The election of the Grand Marshal has undergone many changes since the position was created.  These days, each spring, the campus is buzzing with activity as students and members of the Rensselaer community participate in the event, which also celebrates student life and government, cultural diversity, and the performing arts.

Meet the President of the Union and the Grand MarshalLast year, following the spring 2012 elections, Jonathan Stack ’13, a native of East Longmeadow, Mass., who is now a senior pursuing a dual major in aeronautical engineering and economics, was elected to serve as the 123rd President of the Rensselaer Union, or PU. The PU presides over the executive board, which manages a nearly $8.4 million budget. While at Rensselaer, Stack has been involved with several groups on campus, including the Rensselaer Union Executive Board, where he served as chair of the Union Annual Report Committee. He also serves as a resident assistant in Residence Life.

“Serving as President of the Union has allowed me to further my education in many areas not traditionally included in an engineering curriculum, such as budget management, professional interaction, and how to become an effective leader in both formal and informal groups,” said Stack. “The experience has been better than anything I envisioned, and I am very proud of the progress the Rensselaer Union has made this year.  The time and project management skills that I have gained through this position will benefit me greatly as I transition to full-time employment in my field.”

Stack is just one example of the more than 100 students who have served as President of the Union, preparing for future careers by focusing on student leadership development and gaining business management experience. The position was established in 1891.

Kevin Dai ’14, from Niskayuna, N.Y., who is now a junior majoring in chemical engineering, was elected last year to serve as the 146th Grand Marshal, or GM.  The position was established to honor a student respected and admired by classmates. The title also reflects the military atmosphere of the Civil War era when a soldier was selected to speak on behalf of his fellow soldiers.

The College Life Series From Rensselaer Polytechnic Institute:  Celebrating Student LeadershipIn the position, Dai has been responsible for managing the Student Senate and also acted as the liaison between the student body and the administration. Dai serves as president for the Class of 2014, and is a member of the Pi Kappa Alpha fraternity. In addition, he serves as an executive committee chairman for Green Greeks, a student organization that designs and executes programs to encourage all Greek students to be conscious of sustainability and recycling.

“We always talk about the great education that our students receive at RPI – but that education comes from more than just the classroom, it comes from experiences that we have here,” said Dai. “When I first came to Rensselaer, I was the ‘typical freshman’ student – somewhat smart, but shy and immature. I know that I’ve learned a lot about chemical engineering, but what I value more is the personal growth that I’ve made from the organizations I’ve been part of and the leadership positions I have held.”

Dai noted that serving as GM has been the biggest growth opportunity that he has experienced. “From Board of Trustees presentations, meetings with students, faculty, and administration, and the number of functions that I have had the privilege to attend, it has taken a lot of schedule balancing,” he said. “A lot of people ask how I balance my academics, family, extracurricular activities, and social life, and the real answer is that it takes a lot of prioritization – but it can definitely be done.

“One piece of advice that I could give any incoming student at Rensselaer: Take advantage of everything you can,” Dai added. “There are so many resources and opportunities that you can learn from; utilizing all of these is what makes the Rensselaer student experience the most treasured four years of your life.”

Grand Marshal Week 2013This year, Grand Marshal Week has taken over part of campus with its “Rock Around the Block” neighborhood block party theme. The event kicked off with an opening ceremony April 9. For the duration of the event, the Voorhees Computing Center (VCC) outdoor quad space has been transformed into “GM Week Boulevard,” and is serving as the main location for the events.Some event highlights include a series of inflatable games, club showcases, live entertainment, and Snowman ice cream giveaways. Additional activities include the annual Provost’s barbecue and carnival, pony rides, balloon animals, rock music, a jazz fest, and little bike races, among others.In addition, Earth Fest activities will be held on Friday, April 12, from noon to 4 p.m. The finale event will take place on Saturday, April 13, from noon to 11 p.m. Featured activities include a Rensselaer Union activities fair in conjunction with Accepted Students Day, club performances, live music, and an electronic dance music party. The festivities will culminate with the announcement of the winners of the Grand Marshal and President of the Union elections.

“GM Week is an opportunity to unify the campus and encourage a light, enjoyable outdoor atmosphere within the context of our academic campus and the student elections,” said Will Schmitt ’13, a senior who is majoring in electrical engineering, who is serving as the event chair for the GM Week 2013 planning committee. “We tried to bring everything together this year with the Rock Around the Block (Block Party) theme. We even had professors bringing their students out for ice cream during our kickoff event. It’s really become a fun atmosphere with lots of student and community interaction. Basically, we throw one of the biggest and greatest parties on campus, for one week straight.”

This year, to further promote the event, the 13-member GM Week planning committee members are making full use of social media by tweeting from @GMWeek and using the Rensselaer Student Activities Facebook page: www.facebook.com/rpistudentactivities. For more information and a complete schedule, visit gmweek.union.rpi.edu.