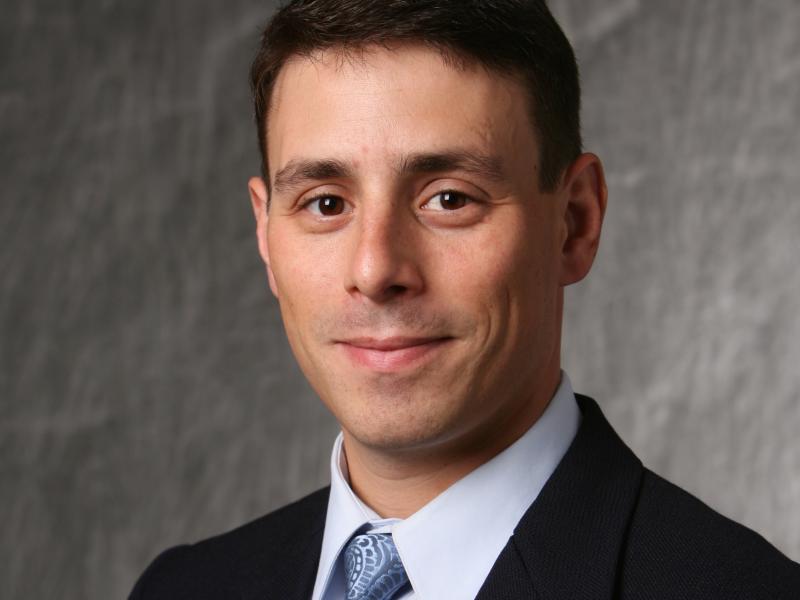 RPI To Host 24th Annual Black Families Technology Awareness Day on February 4
Why Do Fossil Fuels Have So Much Carbon Stored in Them?
RPI holds inauguration for school’s 19th president
New RPI president sees 'real renaissance' in Troy
Rensselaer’s Catherine Royer To Be Honored for Her Research in Molecular Biology
April 15, 2013

Young Chemist To Investigate Solar Cells Based on Life Processes

Peter Dinolfo, assistant professor of chemistry and chemical biology in the School of Science at Rensselaer Polytechnic Institute, has won a prestigious Faculty Early Career Development Award (CAREER) from the National Science Foundation.

Dinolfo, whose work contributes to the School of Science interdisciplinary “Water, Energy, and Sustainability” science theme, is the 15th CAREER award winner in the School of Science within the past 10 years. He will use the five-year, approximately $563,000 award to improve the efficiency of solar cells that use light-absorbing organic compounds – similar to the mechanism plants use to generate energy – rather than silicon to generate electricity.

“By developing a more efficient and economical means of generating solar power, Peter Dinolfo’s research is bringing us closer to a sustainable world,” said Laurie Leshin, dean of the School of Science. “His work not only furthers the cause of renewable energy, it also contributes to the domestic development of an industry that is certain to be important to our future economic prosperity. We are proud to congratulate Peter on earning this prestigious award.”

“The standard solar cells that you see on somebody’s roof use an inorganic solid-state material – such as crystalline silicon – to capture light and convert it to energy, but nature has a far more elegant solution,” Dinolfo said. “Photosynthesis uses many discrete individual molecules, chromophores, to perform this function. Molecular solar cells work in a way similar to photosynthesis; they use artificial chromophores, and they have the potential to surpass the efficiency of solid-state solar cells at a much lower cost.”

“My colleagues and I are delighted that Professor Peter Dinolfo has been recognized by the NSF for his excellent work and forward-looking ideas in the critical area of solar energy capture and conversion,” said Curt Breneman, head of the Department of Chemistry and Chemical Biology. “This CAREER Award will add momentum to his innovative approach to optimizing dye-sensitized semiconductor solar cells and biomimetic redox catalysts, and help hasten the development of the next generation of high-efficiency solar cells.”

Photosynthesis is able to convert nearly all of the energy in sunlight to energy for the plant, efficiently absorbing available sunlight, and converting it into energy rather than wasted heat, Dinolfo explained. Silicon solar cells, by contrast, typically convert between 15 and 20 percent of sunlight into electricity. And while molecular, or dye-sensitized, solar cells currently reach conversion rates of about 12 percent, theoretically they could exceed the efficiencies of solid-state cells while using Earth-abundant and inexpensive materials.

Dinolfo hopes to increase that conversion rate through his work with porphyrins, a group of organic compounds similar to chlorophyll, which can be easily synthesized in a full range of colors, each capable of absorbing a different segment of the light spectrum. Porphyrins are frequently used to absorb and transfer energy in molecular solar cells, but Dinolfo said current designs have not reached their full potential.

“In a plant there’s not just one chromophore, there are thousands, and when one absorbs a photon of light from the sun, it transfers that energy down a cascade from one to the other and then it finally gets to a point where electrons are transferred and you get photosynthesis,” Dinolfo said. “We want to mimic that function in a molecular-based solar cell.”

Dinolfo is experimenting with porphyrins arranged in layers that progressively absorb the full spectrum of available light, while transferring the energy through the layers to an electrode, where the energy can be converted to electricity.

“We’re going to build in different layers, different colors, and hopefully in the right pattern so that, as each particular layer absorbs a photon of light, it will transfer that energy to the surface of the electrode,” Dinolfo said. “If the energy transfer is efficient among all those individual steps, then you will produce more electricity. But if, at each of those steps, only 50 percent of the energy is transferred, and you go through 100 steps, you’re going to end up with nothing. Each of the steps must be very efficient in order for the stacked layers to work.”

Already, Dinolfo said, the lab has experimented with small-scale mixtures of between one and three molecules, each of which absorbs a different section of the solar spectrum.

“We’re starting to learn about how they interact with each other, and how efficient are the individual energy transfer steps,” Dinolfo said. “The long-term goal would be a structure with as many as100 layers containing 10 different colors, taking advantage of the full spectrum.”

Dinolfo will also use the funding to sponsor a summer program educating high school students in research and manufacture of molecular solar cells, in partnership with Queensbury High School.

Dinolfo joined Rensselaer in August 2007, after a postdoctoral position at Stanford University. He is a member of the Baruch ’60 Center for Biochemical Solar Energy Research at Rensselaer. His research areas include the design and synthesis of supramolecular coordination compounds, the fundamentals of electron transfer in inorganic materials, electrochemistry and spectroscopy of inorganic compounds, the development of redox catalysts for solar fuel formation, and surface functionalization and modification techniques. He received his Ph.D. from Northwestern University and his B.S. from the State University of New York at Geneseo.

The CAREER Award is given to faculty members near the beginning of their academic careers and is one of the most competitive awards given by the NSF, placing emphasis on high-quality research and novel educational initiatives.

For additional information on Dinolfo’s research at Rensselaer, visit: