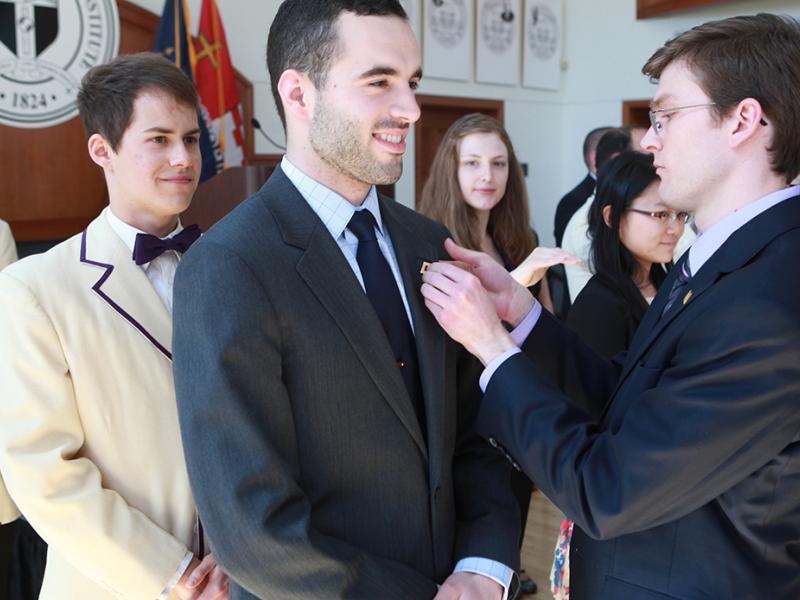 Celebrating Student Leadership, Service, and Devotion to Rensselaer and the Community

Twenty-three students have been inducted into the Rensselaer Polytechnic Institute Phalanx Honor Society for 2013. Phalanx honors student leadership, service, and devotion to the university, and celebrates those who have “worked to better the standing of Rensselaer both on and off campus.” New members were selected—or tapped—by the student members of Phalanx earlier this month.

In remarks to the 2013 inductees and Phalanx alumni and alumnae, Rensselaer President Shirley Ann Jackson noted that Phalanx is the Institute’s highest honor society.

“Members do not simply sign up. They must be nominated—and selected from those nominees—based on contributions that are distinctive and valued,” President Jackson said. “A ‘phalanx’ is a hallmark of ancient Greek warfare, in which troops would stand close together, in a tightly choreographed formation, creating a wall of shields and a hedge of spears. This produced a strong, cohesive unit nearly impenetrable by enemies. The Phalanx Society at Rensselaer is not at war. A more contemporary definition of the word ‘phalanx’ is ‘a number of individuals united for a common purpose.’

In addition, 16 students were inducted into the White Key Society, the junior honor society, for the promise they have shown as leaders as freshmen and sophomores. For the first time this year, new inductees received a pin to commemorate the honor.

President Jackson noted that, “Phalanx members are the people who create and shape the student experience at Rensselaer … they were tapped to join Phalanx not merely for being involved in the campus community, but also because their involvement has had real impact.”

JP Trasatti, president of Phalanx, and Allison Ahn, vice president, presided over the April 6 tapping ceremony, which was attended by Phalanx members, family and friends of the inductees, alumni and alumnae, and others from the Rensselaer community. Burt Swersey, lecturer in the department of mechanical, aerospace, and nuclear engineering, gave the annual Darrin Address. Swersey was the winner of the 2012 David M. Darrin Counseling Award, which is presented annually by Phalanx during Commencement.

“Phalanx is truly about banding together the top student leaders which Rensselaer has to offer and celebrating the accomplishments they have made in the areas of leadership, service, and devotion to our alma mater,” said Trasatti. “By bringing together this group, it allows for new levels of programming, events, and thoughts to be achieved through the collaborative efforts of the members. It is important to note that being a part of Phalanx is not simply something which ends after your time here at RPI—Phalanx allows for the unification of generations of RPI students, thereby permitting the exchange of stories, history, and lessons learned between its alumni and students.”

The ceremony also coincided with the anniversary of another long-standing tradition of historic Greek origin—the Olympics. In 1896, April 6 marked the opening ceremonies in Athens, Greece, of the Games of the First Olympiad—the first international Olympic Games of the modern era.

“The parallels between the Olympics and Phalanx, besides their Greek origins, are obvious,” President Jackson said. “Like our Phalanx Society, each Olympic team comprises a tightly knit group of people working in pursuit of a common goal. Like our Phalanx members, Olympic competitors, by virtue of their talent, devotion, and energy, have a huge impact on their chosen endeavors, thus challenging the status quo. And also like our Phalanx members, Olympic competitors are leaders, movers, and shakers, ultimately raising the bar for others.”

The Phalanx Honor Society has always been a place for the Institute’s natural-born leaders, and many Phalanx alumni have gone on to distinguish themselves both in their careers and their communities, including former Rensselaer President George M. Low ’48 and Dr. Don L. Anderson ’55, both recipients of the National Medal of Science. Since Phalanx was established, the organization has tapped 1,482 active and alumni and alumnae members and 135 honorary members.

For more information about the Phalanx Honor Society, visit:  http://phalanx.union.rpi.edu/