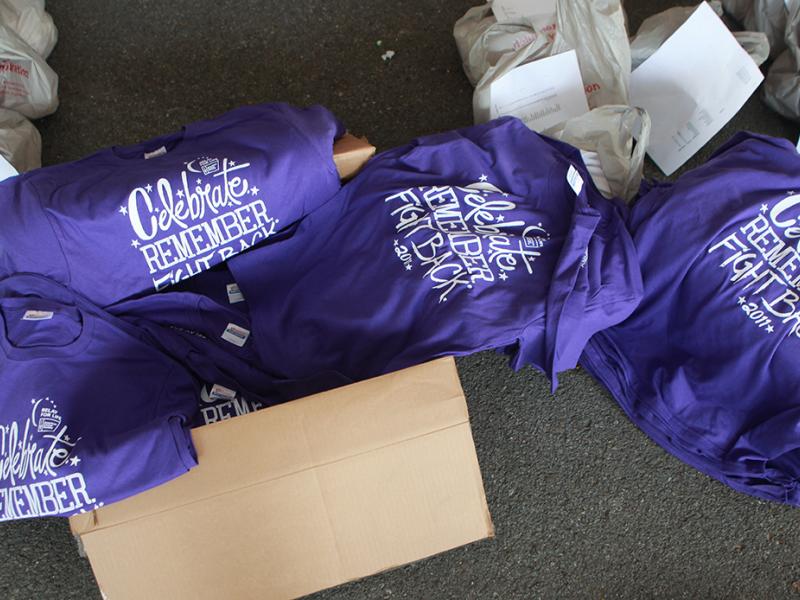 More than 1,000 members of the Rensselaer Polytechnic Institute community, along with family and friends, will participate in the eighth annual Relay For Life event, sponsored by the American Cancer Society. The overnight event will be held on the Rensselaer campus in the Alumni Sports & Recreation Center (Armory) April 26-27 from 6 p.m. to 6 a.m. Closing ceremonies will take place April 27, beginning at 5:30 a.m.

The Relay For Life is a community event that celebrates the lives of cancer survivors and remembers those who have lost their battle with the devastating disease. This year, committee members have selected a Las Vegas theme.

Colleges Against Cancer, a Rensselaer Union student organization, is coordinating the event this year along with support from members of the Rensselaer campus community — including Greek Life, student-athletes, student clubs, faculty, staff, and others. They have joined forces to raise nearly $66,000 (and counting) for cancer research. Committee members hope to raise $120,000. To date, 69 participating teams will walk or run laps around the Armory track on campus in an effort to increase cancer awareness, raise funds, and celebrate survivorship.

According to organizers, elements celebrating the Las Vegas culture and entertainment will be seen throughout the entire event. “We are really excited to host Relay For Life because the journey to end cancer begins with a single step,” said Alex Bricker, a junior majoring in mechanical engineering, who is also serving as this year’s Relay For Life chair.

“This year the American Cancer Society asked organizers to reflect on the question, ‘Why Not?’” Bricker added. “We thought to ourselves, ‘Why not have more participants involved than last year? Why not have more activities and entertainment at the event? Why not advocate living a healthier lifestyle?’ With so many questions, I needed a team that was dedicated to making this night happen. My incredible Relay committee worked hard for the past three months and managed to pull together a night filled with constant activities that we feel the campus will never forget!”

Since its inception, Rensselaer has raised nearly $700,000 to support patient services, research, education, and advocacy within the Capital Region.

Relay For Life Program HighlightsThe opening ceremony will begin April 26. Brief remarks will be delivered by students and members of the campus community. Following remarks, cancer survivors from the Rensselaer community will kick off the Relay For Life event, leading the first lap around the Armory track, holding balloons to represent the number of years since their diagnosis. The caregivers lap will follow. The lap celebrates family members, friends, and all those who have been involved in the care of individuals diagnosed with cancer.

The Luminaria ceremony will take place at 9 p.m. The ceremony is a candlelight vigil in honor of family and friends who have faced cancer. Illuminated white decorated bags will line the track as a poem of remembrance is read, followed by a moment of silence. Additional event highlights include Rensselaer and local student bands, singing groups, dance teams, and DJs, a Las Vegas themed fashion show, a giant board game organized by Red Bull, a poker tournament, a card stacking contest, tug-of-war games, and karaoke contests.

A Walk or Lap Around the Track: How Relay For Life Makes a Difference in the Local CommunityAccording to the American Cancer Society, each year more than one million people receive a cancer diagnosis. In addition, an annual report produced by the organization estimates that about 580,350 Americans are expected to die of cancer, almost 1,600 people per day. Cancer is the second most common cause of death in the U.S., exceeded only by heart disease -- accounting for nearly one of every four deaths.

The collegiate Relay For Life events were established in 2001. Over the years, more than 550 college campuses across the country have raised more than $21 million (and counting) to support cancer research. The events held in New York state and New Jersey have raised more than $2.5 million. In addition, nearly 300,000 individuals participated in the collegiate events held across the country, with more than 30,000 participants representing New York and New Jersey.

In the past year, residents in the Capital Region have been able to reap the rewards of the Relay For Life efforts. For example, more than 1,800 rides were given to cancer patients to and from their treatment appointments; 314  free wigs were given to women; and more than 3,000 local individuals looked to the area American Cancer Society for information about diagnosis, treatment, support services, financial assistance, and other services.

Additional highlights include: a program that enabled 120 women to attend a “Look Good, Feel Better” session to address the cosmetic effects after treatment; more than 600 personal health managers were assigned to newly diagnosed individuals; and patient navigators in seven treatment locations continue to provide one-on-one support and information to patients and loved ones. The American Cancer Society has also been working with local health-care systems and colleges and universities in New York and New Jersey to establish 100 percent smoke-free campuses. Current Capital Region campuses include: Rensselaer, The Sage Colleges, College of Saint Rose, Maria College, and Albany Medical College.

Funds raised have also supported the Hope Club, which provides social and emotional support to more than 800 adults and children, and the Hope Lodges in New York City, Buffalo, and Rochester that have provided more than 27,000 nights of free lodging to cancer patients and their families.

Most important, nearly $2.5 million comes to Capital Region researchers through four active cancer research grants, according to the American Cancer Society, which is known as the largest private funder of cancer research in the United States.

“This year has been an exciting experience for the Relay For Life of RPI,” said Annemarie Papandrea, manager of special events, Relay For Life. “We’re thrilled to have received such great support from the RPI community, and we hope to see everyone join in the Armory for another amazing night. The planning committee has been working hard to create a night jam-packed with activities, entertainment, and ceremonies to keep everyone engaged all night. This is my first year with RPI’s Relay For Life, and I can't wait to see everyone come together for a night to honor cancer survivors and pledge to fight back against a disease that has already taken so much.”

For more information about Relay For Life 2013, visit: www.relayforlife.org/rpi.