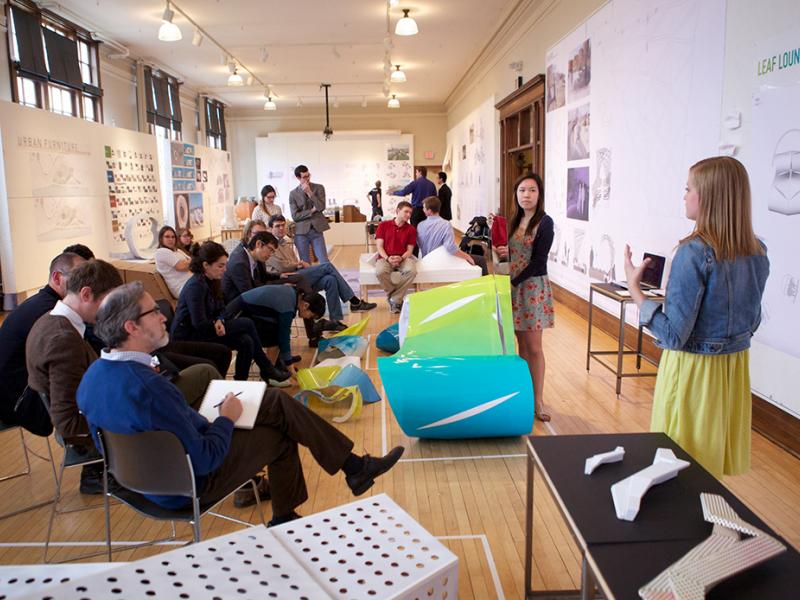 Rensselaer School of Architecture and City of Troy Collaborate on Project

Recreation gets a redesign in an exhibit of “playscape” furniture designed for the Troy Riverfront Park as part of a collaboration between the City of Troy and the Rensselaer Polytechnic Institute School of Architecture. The exhibit, which opens May 14 at 2 p.m. in the Greene Gallery, features a series of full-scale mock-ups of designs developed in the spring 2013 vertical design studio, titled Urban Furniture, a class for third- and fourth-year architecture students taught by Lonn Combs, assistant professor of architecture at Rensselaer.

The designs represent a range of objects, said Combs, including a “21st century jungle gym,” a dual-purpose bench/climbing rock, and a series of looped structures that can serve as seating and tunnels for children. One object even incorporates a misting function for cooling down in hot summer weather.

“How can the furniture that’s installed in the park have an effect on making it a stronger destination for the community?” said Combs. “There’s really a cool and imaginative range of research on how one could—through simply adding, and placing, and siting some of these objects within the waterfront park—radically change the kind of uses and play that can happen along the water’s edge. The park becomes a playscape.”

The project is an extension of a recent series of collaborations with Capital Region institutions introduced by Evan Douglis, dean of the School of Architecture. In recent years, the school has worked with the Shaker Museum, the Hyde Collection, and Schenectady Museum of Science and Innovation. Also, second-year architecture students regularly incorporate case studies of housing schemes within the city of Troy in their studies.

“This project has been wonderful initiation for the School of Architecture and City of Troy to work together as partners and to re-imagine the City of Troy,” said Douglis. “Since I arrived in Troy I’ve been eager to see the resources at the top of the hill serve the city, and we are very pleased to be able to offer insights, ideas, and designs for revitalizing this amazing post-industrial city. Riverfront Park is a beautiful public space, but it isn’t fully realized. We hope our ideas for urban playscape furniture help to expand the opportunities for play and recreation within the park, and establish it as a cherished and well-used public space.”

At the same time, Douglis continued, the project is “a perfect educational opportunity for our students.”

“Students in schools of architecture traditionally don’t get the opportunity to see their work realized full-scale—if you’re designing a building that’s a million-square-foot space, the chance to build any part of that is unlikely,” Douglis said. “The great part of this project is that students are able to move their designs to a full-scale prototype, they’re able to think at the scale on which it will be built. That prepares them and propels them in a very strong way into the working world after graduation.”

Lou Rosamilia, mayor of the City of Troy, praised the collaborative project.

"This is an excellent example of how well our educational establishments, the city and the many creative minds of our area can add to the betterment of where we live, work and play,” Rosamilia said. “We are so proud to have been a part of this wonderful project."

Combs said the challenge of playscape furniture for Riverfront Park was an excellent basis for a vertical design studio, a series of courses on specialized areas of architecture—such as urban planning, building design, or advanced architectural research—open to upperclassmen.

The studio on Riverfront Park explored questions of public space, urban environments, and revitalization, in the context of the objects that would furnish the park. As part of the process, Combs said, he asked students to design objects that would inspire the residents of Troy to more fully enjoy the park.

“If there was a critique to our urban spaces with regard to furniture, it’s that they’re not conceived to be open to interpretation. A bench is a bench is a bench; whether a child sees it as a part of an imaginary fort is not normally considered in the conventional object’s design,” said Combs. “It was important for the students to think about the objects outside of the traditional idea of ‘categories of furniture’—for example, here’s a chair, a bench, a swing set, a sandbox. They were tasked with designing things that were multipurpose, a picnic table over the weekend, a running or jumping ramp after school.”

Combs said that 14 students, working in teams of two, developed seven designs that will be on display in the exhibit.

“Ultimately, we’ve been engaged in trying to design objects that really stimulate the imagination of the residents of Troy and attract families to come down and enjoy the park,” said Combs. “In that sense, we really activate the park, it acquires a life of its own.”