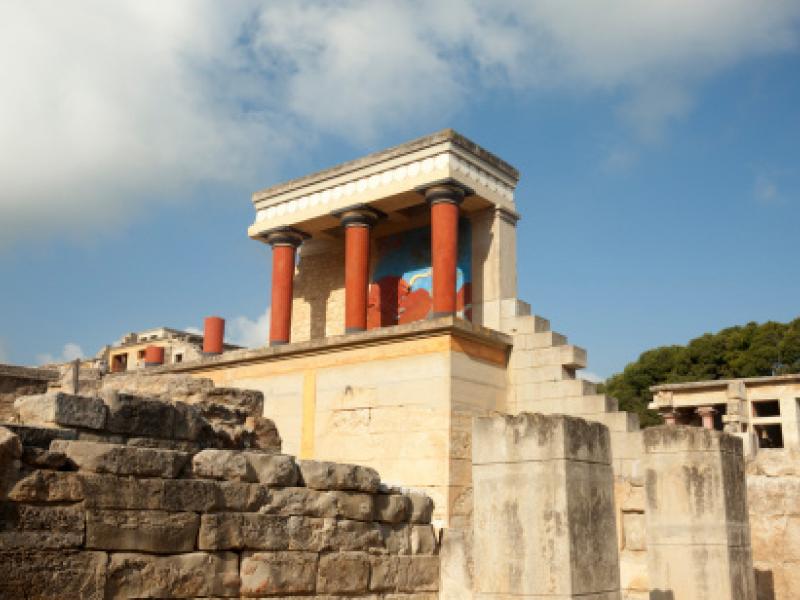 Reprinted by permission from Getty images

Research published today in Nature Communications—produced with the aid of Rensselaer Polytechnic Institute computer scientist Petros Drineas—used DNA analysis to unearth the previously unknown origin of the Minoans, who some 5,000 years ago established the first advanced Bronze Age civilization in present-day Crete.

Results suggest that the Minoan civilization arose from the population already living in Bronze Age Crete, people who were probably descendents of the first humans to reach Crete about 9,000 years ago, and who bear greatest genetic similarity with modern European populations.

The British archeologist Sir Arthur Evans in the early 1900s named the Minoans after a legendary Greek king, Minos. Based on similarities between Minoan artifacts and those from Egypt and Libya, Evans proposed that the Minoan civilization founders migrated into the area from North Africa. Since then, other archaeologists have suggested that the Minoans may have come from other regions, possibly Turkey, the Balkans, or the Middle East.

In the Nature Communications study, a team of researchers in the United States and Greece, including Drineas, a Rensselaer associate professor of computer science and member of the Rensselaer Data Science Research Center, used mitochondrial DNA analysis of Minoan skeletal remains to determine the likely ancestors of these ancient people. The team was lead by Dr. George Stamatoyannopoulos, University of Washington professor of medicine and genome sciences.

Mitochondria, the energy powerhouses of cells, contain their own DNA, or genetic code. Because mitochondrial DNA is passed down from mothers to their children via the human egg, it contains information about maternal ancestry.

Drineas worked to transform a database of genetic information on more than 14,000 modern and ancient individuals, and genetic information collected from the remains of 37 Minoan individuals, into a visual format that revealed the connections between the ancient Minoans and modern populations in Europe, Asia, and Africa. To achieve the results, Drineas used his own expertise in applying a mathematical technique called “principal component analysis” to the large dataset.

“Principal component analysis allows us to take a large dataset and reduce it to a more manageable number of dimensions —say two or three dimensions —which can be plotted visually,” said Drineas, who completed the statistical analysis in collaboration with Peristera Paschou of Democritus University of Thrace. “Although the technique has been around for more than a century, my group, for the past 10 years, has been developing the algorithms that allow us to apply this technique to massive datasets. We can handle these 14,000 samples and we can do it in a very routine way using nothing more than a quality desktop computer.”

Drineas said the results of the analysis were immediately visible.

Drineas said his work on the project is an excellent example of the interdisciplinary research undertaken by the Rensselaer Data Science Center.

“This is one of the things that we do very well at Rensselaer, and that we are well known for,” Drineas said. “If you look at the team, you’re looking at biologists, geneticists, applied mathematicians, and computer scientists. The data science center has a number of projects that emphasize this interplay.”

Stamatoyannopoulos, lead author of the paper, believes that the data highlight the importance of DNA analysis as a tool for understanding human history.

“Genetic analyses are playing in increasingly important role and predicting and protecting human health,” said Stamatoyannopoulos. “Our study underscores the importance of DNA not only in helping us to have healthier futures, but also to understand our past.”

Further analysis showed that the Minoans were only distantly related to Egyptian, Libyan, and other North African populations. The Minoan shared the greatest percentage of their mitochondrial DNA variation with European populations, especially those in Northern and Western Europe.

Co-authors of the study are Jeffery R. Hughey of Hartnell College; Peristera Paschou of Democritus University of Thrace; Drineas of the Rensselaer; Manolis Michalodimitrakis of the University of Crete; and Donald Mastropaolo, Dimitra M. Lotakis, Patrick A. Navas, and Stamatoyannopoulos of the University of Washington. The study was partially supported by a grant from the National Institutes of Health (5T32 GM007454), as well as from private funding. Drineas was supported by an NSF CAREER award (NSF CCF 824684).