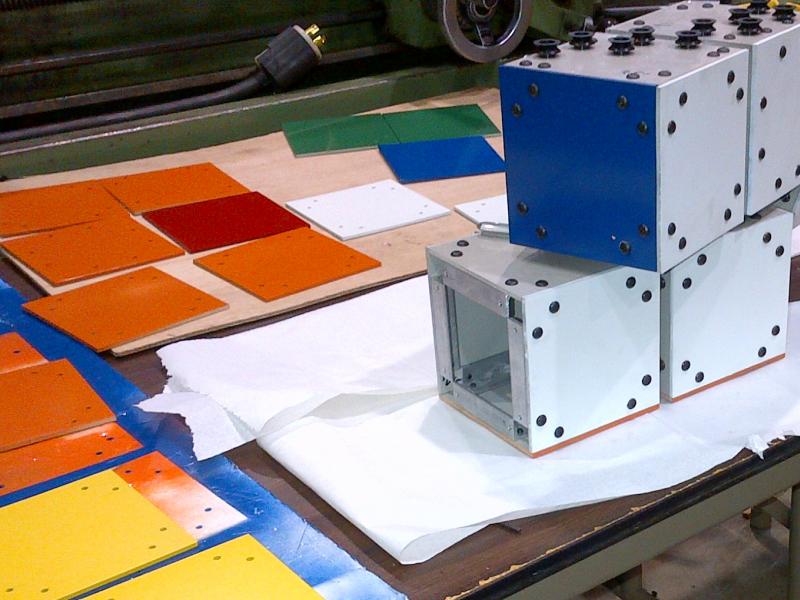 Each year at Commencement, the graduating class presents the university with a unique and spirited gift. And now the fastest selling toy in history will find a home on the Rensselaer Polytechnic Institute campus. Members of the Class of 2013 are raising funds to create a large-scale fully functional Rubik’s Cube ®. The Rubik’s Cube ® will be unveiled during the Rensselaer Reunion & Homecoming Weekend planned for Oct. 4-6.

The Rubik’s Cube ®, a 3-D combination puzzle, was created in 1974 by Ernő Rubik, a Hungarian sculptor and professor of architecture. At the time, Rubik planned to use the cube as an academic tool while teaching a Form Design course in the architecture department at the Budapest College of Applied Arts. After creating a prototype and mixing the colors, Rubik began to realize that returning the prototype to its original form was in fact a puzzle. Shortly after the initial creation, Rubik realized that no amount of random twisting would align all of the colors, and that only by developing a particular mathematical formula could he return his prototype back to its original form.

“Last spring, members of the Class of 2013 began considering what they hoped to achieve for their senior class gift and we decided that the gift should be unique to the campus, interactive in nature, and represent the characteristics of every RPI student,” said Class President Christopher Newhard, who majored in biochemistry and biophysics.

“After bouncing around a few ideas, the Class of 2013 decided on the giantRubik’s Cube ®,” Newhard said. “We had several reasons for selecting the Rubik’s Cube ®. First off, it’s a nerdy toy that resonates with a lot of the student body. Secondly, building it, with a brand-new mechanism by necessity, would be an impressive feat of engineering design and manufacturing, again resonating with the nature of our school. And lastly, it will stand as a lasting piece of art on campus to be admired and used for decades to come. Functional and aesthetically pleasing, it’s going to be awesome!”

The Rubik’s Cube ® will be placed in the Darrin Communication Center landing at the end of the Great Hall.  The sculpture — which will measure over three feet per side — is based on an original design by Rensselaer student Sam Seifert, an electrical engineering major.

“The innovative project brought together students, faculty, and staff from various disciplines in ways that reflect the Rensselaer Plan 2012-2024 emphasis on the need for interdisciplinary focus,” said Katherine Manz, a senior who majored in chemistry and psychology, and a member of the Pi Beta Phi Fraternity for Women. Manz also serves as the head of the Class of 2013 Gift Committee. “Solving a Rubik’s Cube ® takes a high level of skill and dedication and has captured the interest of many students on campus, as evidenced by the Rubik’s Cube club on campus and the many different students in various classes who have participated in Rubik’s Cube competitions, with one student able to solve the Rubik’s Cube in 15 seconds.”

“The rationale behind the selection of a large-scale Rubik’s Cube represents a number of principles that incorporate engineering, architecture, and science skills in an interdisciplinary format,” said Barbara Nelson, manager for campus planning and facilities design. “I am so impressed with the Class of 2013. The student-led project is a collaboration between faculty and staff from the School of Engineering and the School of Architecture, with additional support from several campus departments, including Institute Advancement, Student Life, and Administration.  The students really worked hard to pull from the best resources on campus to form a truly interdisciplinary and creative team to advise them. This is what Rensselaer is all about.”

Thus far, members of the Class of 2013 have raised more than $5,000 to support the project. To date, 190 members of the class have donated funds. In addition, 18 students became Patroons of Rensselaer with their gifts of $100 or more. The committee needs to collect $20,000 to complete the project.

With assistance from Larry Oligny, a sophomore mechanical engineering major, the Research Machine Shop, and the Manufacturing Innovation Learning Lab (MILL); in addition to students from the Hudson Valley Community College Manufacturing Technical Systems class, members of the Class of 2013 Gift Committee, were able to work on manufacturing the parts needed to complete a prototype, a one third scale of the planned full version.

Plans are underway to work with Nelson Bruns’10 — an engineering graduate who incorporates his style, environment, and taste in music into his stainless sculptures — to build the actual cube. Bruns, an artist from southern Maine, has already created several sculptures for Rensselaer.

“The group of seniors I had the pleasure to work with on this project exemplifies the overall high caliber of our graduating class,” said Sam Chiappone, manager of fabrication and prototyping resources in the School of Engineering. “This group in particular successfully defined the project, solved an engineering challenge, managed a broad advisory group, and marketed the results to make their idea a reality. My congratulations go out to this senior team for their efforts.”

In addition to Nelson and Chiappone, other members of the Rensselaer campus involved in collaborating and advising the Class of 2013 on the project include Lester Gerhardt, professor in Electrical, Computer, and Systems Engineering; Larry Ruff, senior systems engineer in the MILL; Bill Bergman, manager of the woodshop in the School of Architecture; Jim Schatz, supervisor in the Research Machine Shop; Jaclyn Day, assistant advancement officer; Courtney Bissell, associate advancement officer; and Amy Pettengill, class dean in the Student Experience Office.

For more information about the Class of 2013 Gift, and to view a video of the prototype in action, visit: