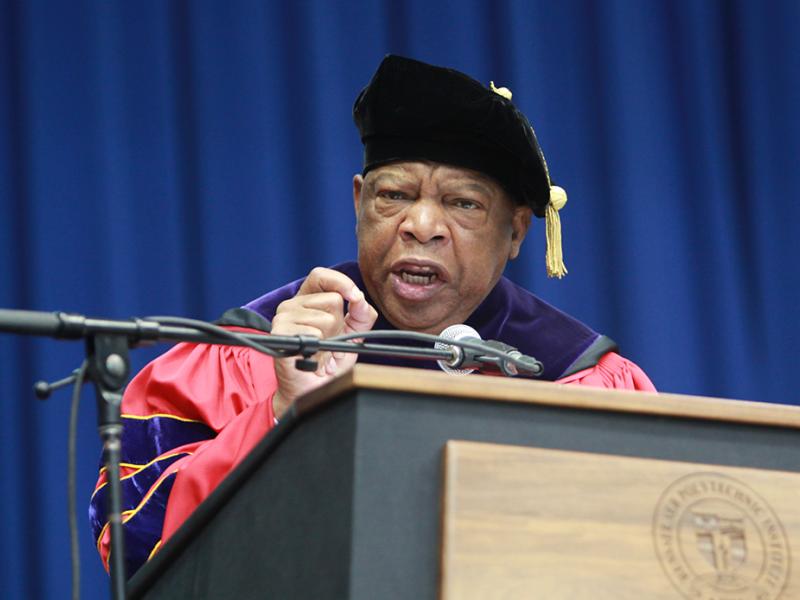 U.S. Representative John R. Lewis (D-GA) — one of the nation’s most dedicated and courageous civil rights leaders — urged graduates to use their skills to build a kinder, more equitable society, at the 207th Commencement at Rensselaer Polytechnic Institute Saturday.

“What we can learn from the history of the March on Washington is that democracy is not a state. It is an act,” said Lewis. “We will never reach a place in our democracy where we can finally sit down. We will never reach a place where we can put away our responsibility as citizens and leave our job to others. Our society requires you and me to get off the sidelines and get in the game.”

Lewis addressed 1,676 graduates, their families, and friends at the 207th Rensselaer Commencement today, held in the Houston Field House. During the ceremony, Rensselaer awarded a total of 1,834 degrees. They include: 411 master’s degrees, 163 doctoral degrees, and 1,260 bachelor’s degrees. Some graduates have earned more than one degree.

Rensselaer President Shirley Ann Jackson Calls on Graduates To Use Technology for the Greater Good Rensselaer President Shirley Ann Jackson told graduates to use the tools offered by new technologies for their highest purpose: answering the world’s grand challenges and building communities. But to succeed in the data-driven, supercomputer powered, web-enabled, globally connected world, Jackson said, graduates will have to redefine leadership. As technology grows more powerful, they will need a greater degree of humanity and to stretch their capacity for collegiality and friendship in order to work across disciplines and national borders.

“I urge you to take the most expansive possible view of the work you will do in future. I hope you do work to improve humanity itself — and help the rest of us to find new ways to teach, to heal, to amuse, to protect, and ultimately to understand each other,” said Jackson. “Just remember, the arc of one’s career follows the arc of one’s character.”

Class President Reminds Graduates To Live by the Motto of RensselaerClass of 2013 President Chris Newhard told graduates to live by the motto of Rensselaer — “why not change the world?” — on a local scale. Newhard said he originally considered only the most obvious interpretation of the motto: that he, as a member of the Rensselaer community, should impact the global community in a positive manner.

“I have great expectations for each of you in these challenging times, particularly with the strong foundation of a Rensselaer education, to lead and to make a difference," said Mullen.

“I can’t pretend to know how your world will change — but I know it will, and it will change at a pace that will continue to increase exponentially. You can’t stop it, and in many ways, you are the cause of it. Learn to love it. And make it your ally,” said Burns.

“If you’re building vaccines, if you’re creating solutions to global warming, if you’re leading a foundation — you need to get out of the lab, out of the office, out of the theory — and take the chance to live your work — put yourself in the shoes of the person or community you aim to serve and really attempt to understand what they need, why that is the case, and how you can stand with them to create the change you both seek,” said Stonesifer.

Honorands Receive Honorary DegreesLewis received an honorary Doctor of Laws degree. Before he was elected to the U.S. House of Representatives for the Fifth Congressional District in Georgia in 1986, Lewis compiled an impressive track record that led many civil and human rights leaders to call him one of the most courageous persons the civil rights movement ever produced. Roll Call magazine once said, “John Lewis…is a genuine American hero and moral leader who commands widespread respect in the chamber.”

As a young man from Troy, Ala., Lewis was inspired by the activism surrounding the Montgomery Bus Boycott and the words of the Rev. Martin Luther King Jr. As a student at Fisk University, Lewis organized sit-in demonstrations at segregated lunch counters in Nashville. During the height of the civil rights movement, from 1963 to 1966, Lewis was named chairman of the Student Nonviolent Coordinating Committee (SNCC), which he helped form. SNCC was largely responsible for organizing student activism in the movement.

While still a young man, John Lewis became a nationally recognized leader. By 1963, he was dubbed one of the “Big Six” leaders of the civil rights movement. At the age of 23, he was an architect of and a keynote speaker at the historic March on Washington in August 1963.High resolution photos

Mullen received an honorary Doctor of Engineering degree. Mullen graduated from the U.S. Naval Academy in 1968, and received a master of science degree in operations research from the Naval Postgraduate School and completed the Advanced Management Program at Harvard Business School.

He served as the 17th Chairman of the Joint Chiefs of Staff, from 2007 until 2011. He was the principal military adviser to President George W. Bush and President Barack Obama, as well as two Secretaries of Defense. He led the military during a critical period of transition, overseeing the end of the combat mission in Iraq and the development of a new military strategy for Afghanistan. He advocated for the rapid development and fielding of innovative technologies, championed emerging and enduring international partnerships, and advanced new methods for combating terrorism — all of which directly culminated in the operation that targeted Osama bin Laden.

As Joint Chiefs Chairman, he spearheaded the repeal of “Don’t Ask, Don’t Tell.” In addition, he successfully led the matrix, consensus-based, complex organizational model of the Joint Chiefs of Staff.High resolution photos

In 2000, Burns was named senior vice president, Corporate Strategic Services, heading up manufacturing and supply chain operations. Alongside then-CEO Anne Mulcahy, Burns worked to restructure Xerox through its turnaround to emerge as a leader in color technology and document services. In April 2007, Burns was named president of Xerox, expanding her leadership to also include the company’s IT organization, corporate strategy, human resources, corporate marketing, and global accounts. At that time, she also was elected a member of the company’s board of directors.

Burns was named chief executive officer in July 2009 and shortly after, made the largest acquisition in Xerox history, the $6.4 billion purchase of Affiliated Computer Services, catapulting the company’s presence in the $500 billion business services market and extending the company’s reach into diverse areas of business process and IT outsourcing. On May 20, 2010, Burns became chairman of the company.High resolution photos

Stonesifer received an honorary Doctor of Humane Letters degree. A longtime leader in the technology, foundation, and nonprofit arenas, Stonesifer is a graduate of Indiana University. She is president and CEO of Martha’s Table, a nonprofit organization in Washington, D.C., focused on providing food, nutrition, education, and other support to help individuals and families break the cycle of poverty. She also advises business, nonprofit, and government leaders on strategies for reducing inequity. In 2012, she completed a three-year term as chair of the Smithsonian Institution Board of Regents.

In the 10 years prior, Stonesifer was the founding CEO of the Bill & Melinda Gates Foundation. She continues to serve on the Smithsonian Board of Regents, as well as on the board of the National Museum of African American History and Culture. She is involved in several education efforts including America Achieves Advisory Board, Hope Street Group Advisor, Raise DC Executive Team, and Circle of Allies and Champions for the National Council of Youth Leaders.High resolution photos

For more information about the Commencement speaker and honorands, visit: http://news.rpi.edu/update.do?artcenterkey=3158

For information regarding Commencement, visit: http://www.rpi.edu/academics/commencement/index.html