Linking the Lake – The Jefferson Project at Lake George

Linking the Lake – The Jefferson Project at Lake George 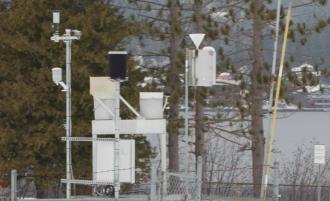 Spring is inevitable. And while ice still caps Lake George, data about the water beneath has been flowing into the Jefferson Project at Lake George throughout the cold, long winter. The winter has been a time for testing, de-bugging, and anticipation, as researchers begin working with a network of sensor platforms installed in the waning months of 2014. The sensors include acoustic Doppler current profilers (ADCPs), tributary stations, and weather stations. A pair of vertical profilers – installed last fall – have been decommissioned for the winter and will be returned to their moorings in the spring.

Each of the sensors is a combination of “off the shelf” technology and additional “smart” computational elements from IBM Research that enable the sensors to communicate with one another and autonomously adapt to changing environmental conditions.  For example, “smart” sensors know to take measurements more frequently if something of interest, like a storm, pops up within or around the lake.

Data from the sensor network, combined with 35 continuous years of data from an ongoing study of the lake, and a 2014 bathymetry survey, will inform a series of computational models that track and predict the weather, run-off, and circulation of Lake George.

Here’s a run-down on the latest round of installations:

Five weather stations, installed in and around the lake, measure temperature, humidity, barometric pressure, wind velocity, rainfall, and the amount of sunlight present. Three free-standing weather stations – in Lake George Village, Bolton Landing, and Ticonderoga – and two mounted on the floating vertical profilers, are critical for weather models, run-off models, and circulation models, as rainfall on the lake or in the watershed is a major source of water for Lake George.

Four tributary stations, also known as “stream stations,” will capture data on how much water is entering the lake from each stream and what the water is carrying in terms of sediments, nutrients, and contaminants. Stream stations have been installed along West Brook in Lake George Village, Finkle Brook in Bolton Landing, Northwest Bay Brook, and the La Chute - the outlet for Lake George in Ticonderoga.

Because the vast majority of nutrients and contaminant in the lake enter through runoff of storm water, each of these tributaries offers valuable insight into the process: West Brook is the most urbanized of the tributaries being monitored; Northwest Bay Brook, which drains the largest portion of the watershed, is relatively pristine; Finkle Brook runs through a mix of developed and wild lands; and measurements taken from the La Chute will reveal the total discharge of the lake in both water volume and water chemistry.

The stream stations capture the volume and velocity of water moving through the stream corridors via an acoustic Doppler flow meter mounted in the streambed. They are also equipped with a system that pumps stream water into a shelter and over probes that measure conductivity, temperature, pH, oxidation-reduction potential, turbidity, dissolved organic matter, chloride, dissolved oxygen, and chlorophyll a (which serves as an indirect measure of how much algae is in the water). (As a side note, Northwest Bay Brook, which does not have year-round electrical service, will capture water chemistry data on a seasonable basis). A programmable automated sampler also collects water for lab analysis of metals, nutrients, and contaminants.

The two vertical profilers capture much of the same information at various depths along their mooring points on the lake. The profilers are moored in deep areas of the lake. A probe equipped with sensors (called a “sonde”) can be raised and lowered on a winch-operated cable, allowing the researchers to monitor how the parameters change at different depths throughout the day and night, and throughout the seasons.

Finally, two Acoustic Current Doppler Profilers (ADCPs) are tethered to the lake bed. ADCPs are acoustic sensors that measure currents within the lake in three dimensions in real time.  They operate using the principles of SONAR technology, by the reflection of acoustic beams from suspended particles in the water. The ADCPS have been collecting data since late last fall. Come ice-out, researchers will trigger a release mechanism that will bring the devices, and their accumulated data, to the surface.

Just like the weather, as spring approaches, activity on the Jefferson Project is heating up!