Internet of Things … Aboard a Steamboat

Internet of Things … Aboard a Steamboat 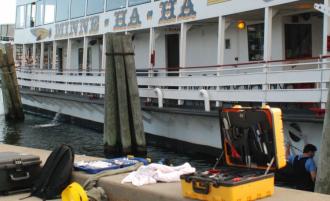 For more than a year, the Jefferson Project at Lake George has been collecting electronic data from sensors mounted in stream beds, platforms moored on the water, and the depths of the lake bottom. A tour boat plying the southern basin of the lake may be an unexpected next step for sensor deployments, but it’s actually an ideal perch for scientific instrumentation, according to researchers Mike Kelly and Jeremy Farrell.

A few weeks ago, the Jefferson Project bolted an Acoustic Doppler Current Profiler (ADCP) to the starboard side of the Minne-Ha-Ha, a paddlewheel steamboat and Lake George icon owned by the Lake George Steamboat Company. An ADCP employs techniques similar to active SONAR to track the direction and speed of particles suspended in the water, providing information on water circulation within the lake.  Researchers also plan to use the instrument’s backscatter data to track the volume and movement of zooplankton in the lake. The Minne-Ha-Ha, which in summer months circles the southern two miles of Lake George in seven daily cruises, passes several features of scientific interest, and does so slowly and predictably enough to gather data in its path. (In the photo on the left, Farrell and David Diehl of DFWI bolt the ADCP head to a mount on the Minne-Ha-Ha.)

To put this in context, let’s quickly recap events thus far: the Jefferson Project —a partnership between RPI, IBM Research, and the FUND for Lake George— combines Internet of Things (IoT) sensor platforms with surveying and experimentation to better understand Lake George. This is a new model in environmental monitoring, a critical element of which is the IoT network of sensors —able to communicate with one another, researchers, and supercomputers— that monitor chemical and physical parameters related to weather, water runoff, water circulation, and water quality. The incoming data fuel a series of computer models depicting the lake’s weather, runoff, circulation, and ultimately food web of the lake, with the goal of understanding how human activity impacts the ecology of Lake George.

In its cruise, the Minne-Ha-Ha passes several features of the lake interesting to the Jefferson Project.  Measurements taken along its path can provide invaluable information about the Caldwell Basin —the southernmost sub-basin of Lake George— said Kelly, an IBM senior research engineer.  The ship crosses the mouths of three of the largest tributaries into the lake —West Brook, East Brook, and English Brook— and can gather data on how incoming waters mix within the southern basin.

It also passes one of the projects vertical profilers —a stationary floating sensor platform which monitors weather and multiple aspects of water chemistry and quality at varying depths— and data from the two sources taken together provides a more complex, robust view of conditions in the area over time.

And, as the Minne-Ha-Ha crosses the lake from east-to-west at the boundary along the deepest point of the sub-basin, it can provide information on the exchange of water between the sub-basins (there are five throughout the lake).

Here’s what Kelly had to say about the value of a mobile ADCP to the Jefferson Project:

To me, any single piece of the picture this will provide would be a sufficiently compelling reason to do this, and when you put everything together, this has enormous potential for advancing our understanding of the south end of the lake. The ADCP on the Minne-Ha-Ha will give us information on aspects of the lake that would have been far more difficult to understand with stationary sensors.

Researchers are also experimenting with the potential for tracking zooplankton using ADCP data, an application driven by Farrell, a post-doctoral researcher working under Sandra Nierzwicki-Bauer, director of the Darrin Fresh Water Institute. In December, 2014, Jefferson Project researchers lowered three ADCPs to the lakebed, leaving them to collect data for 5 months. When the researchers reviewed the data, biologists Farrell and Nierzwicki-Bauer noticed a striking pattern that coincides with the diurnal vertical migration of zooplankton.

According to Farrell, during daylight hours, zooplankton inhabit the deeper waters of the lake, where, in the darkness, it is believed that they are less likely to be seen by predators. At night, the tiny animals —the primary producers in the lake —rise closer to the surface of the lake to feed on phytoplankton. Although this phenomena is well known, and can be observed by hand-harvesting plankton at various times and depths, the ADCP data can amplify those efforts to provide abundant and immediate information on the volume and movements of zooplankton. The result is an insight into a primary consumer, a food source near the base of the food web, and close to the interface between chemical and physical models of the lake and the food web model.

Collecting data on water circulation from a moving boat does present challenges, more so in the case of the Jefferson Project’s IoT sensor platform. Not only do researchers have to subtract the speed, direction, pitch, yaw and roll of the boat from the data they collect, they also have to equip the sensor with “smart technology” that enables it to communicate and adapt to changing circumstances.

To achieve this level of function, researchers are connecting an off-the-shelf ADCP head with GPS and telecommunications capability, and are building custom computer hardware and software systems to control the ADCP functions, collect data, and communicate with the Jefferson Project network. (The photo on the left shows Kelly finalizing preparations to the ADCP head, in the foreground, prior to mounting it on the hull.)

Given the level of customization and innovation needed to bring the project to fruition, Kelly emphasizes that the Minne/ADCP is a “staged effort.” With stage one well underway, stay tuned for more.