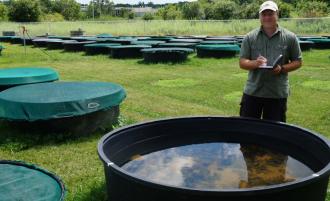 A lot of what’s been written about the Jefferson Project at Lake George focuses on the project’s Internet of Things (IoT) platform: linking the lake with a network of smart sensors, collecting data on current flow from an instrument mounted on the Minne-Ha-Ha, or using image processing software to automate plankton identification.

When combined with monitoring of lake species, these innovative technologies gather an enormous amount of information about the lake: where lake water comes from, where it’s going, and what it’s carrying (like salt, nutrients, invasive species); as well as which organisms live where in the lake, and at what quantities. This information tracks the state of the lake over time.  But it has a limitation – it can tell us how the lake is changing, but not why.

To understand why those changes are occurring, we have to establish the cause and effect relationship between what we find in the lake and its impact on the food web. We do this through experimentation at our mesocosm facility.

The simplest way to explain a mesocosm is to compare it to a Petri dish. A Petri dish is used to mimic desired conditions in a controlled fashion. Researchers manipulate one variable in the dish, and compare the results with an identical control dish in which the sole variable has not been manipulated. Now imagine that these Petri dishes are 6 feet in diameter and hold 300 gallons of water, and you have a mesocosm. That is much larger than your average experimental container, but the mesocosm allows us to mimic lake or pond conditions in a controlled, natural fashion. With a container this large, you need a lot of space to actually run an experiment. This summer, we filled an entire field at the Rensselaer Technology Park with close to 1,000 of these mesocosms, running experiments from June through September (the image above shows researcher Bill Hinz with some of our largest mesocosms).

Many of the experiments we ran at the mesocosm facility are intended to explore changes in Lake George observed during 30 years of research on the lake. This research, which serves as the foundation of the Jefferson Project, shows that the lake is changing, with notable increases in salt, algae, and invasive species

The most studied subject this summer was, without question, salt (sodium chloride). It’s no surprise that de-icing salt is a pressing subject in the U.S., as we use close to 850,000 tons of salt in New York state alone. Researchers on the Jefferson Project are interested in what difference salt could be making in the freshwater ecosystems around us – particularly Lake George. We are aware of where the lake stands in terms of chloride concentrations, and we can compare that to lakes all over the country of equal size. This will allow us to infer how varying chloride levels could change the lake, and what we may be able to do to prevent those changes.

Our researchers incorporated salt into a number of experiments that looked at how salt changes the “equilibrium” of the tanks. Here, equilibrium refers to the pristine conditions we see when salt is absent, and these experiments will help us understand why salt affects these conditions. For example, we know that juvenile fish and other small fish feed primarily on small organisms called zooplankton. It would be pertinent to know how increasing chloride levels affect this relation, because without this predator-prey interaction, the entire balance of the lake could be thrown off.

Another major area of study this summer was on invasive species. Luckily, Lake George has a relatively low number of invasive species. We had experiments that looked at the interactions between three invasive species: Asian clams, zebra mussels, and banded mystery snails. It’s important to understand these organisms because of the potential threat they pose to the lake. If, for example, the Asian clam is partially to blame for decreasing water clarity, it would be beneficial to know how other species, invasive or not, are helping or hurting that change in clarity.

A mat of filamentous algae grows in the presence of excess nutrients.

Finally, the research group also investigated how excess nutrients may be driving some changes in freshwater systems – particularly nitrogen and phosphorus. These nutrients are used by plants and animals in the lake, so if they are available in excess, it could disrupt the system by allowing one organism to grow out of control. We were particularly interested in Nitella, a macroalgae that grows on the lake bottom in large beds about 10 meters below the surface. Researchers in our lab wanted to understand how increasing nutrients, in combination with varying light levels, affect the growth of Nitella. Changes in light levels are relevant in this case because we wanted to better understand the “tipping point” for Nitella when it comes to water clarity.

The mesocosm experiments we ran this summer begin to tackle some of the most pertinent questions and concerns arising from Lake George and other freshwater bodies across the U.S. In the months to come, we will analyze and review our results, and offer select findings for publications in peer-reviewed journals. We’ll also be planning experiments for the coming year, and that brings us full circle as we use observations from the IoT platform to generate hypotheses and refine our research questions. Taken together, the observations and experimentation of the Jefferson Project are making it possible for us to predict changes, and preserve Lake George.