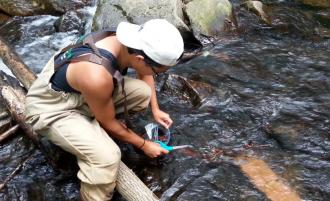 (In this guest post, one of a series on monitoring and experimentation in the Jefferson Project at Lake George, Aaron Stoler, a post-doctoral researcher in the laboratory of project director Rick Relyea, explains why and how researchers monitor tributaries to Lake George, and how that effort fits into the overall strategy of the project.)

Nature is slowing down for the winter. Over the next several months, an icy tapestry will blanket the mountain peaks and valleys. Within this frozen landscape, streams are an exception. Because streams do not freeze, aquatic life in their reach thrives. Finding shelter in cracks between rocks and in the crevices between packed leaves, fish and insects slowly consume the leaf litter from last autumn, and steadily grow while awaiting warmer temperatures.

With the spring thaw, snow melts and seeps through the ground, trickling towards the streams. Along its path, the water dislodges particles of soil and minerals. Bacteria and fungi in the streams absorb these dislodged bits of landscape. Hungry for fresh food, fish and insects in the streams eat the bacteria and fungi. In a short time, many of the insects that have survived the hungry jaws of fish will develop wings and fly out of the stream, and many of the fish will swim downstream towards the lake in search of new food. (The image below shows one such insect - a stonefly larva.)

Through the rest of spring and summer, heavy rainfall erodes the landscape and flushes leaf litter, soil, and minerals into the streams. As this material enters the lake, it spurs algal growth. These algae feeds dozens of animals, such as plankton, clams, snails, and mussels. These animals are tasty prey for small fish. In turn, small fish become prey for larger fish. Whatever material is not used by the lake food web is either flushed out of the lake through another stream, or is buried in the lake sediment.

This process continues until the autumn, when a wash of tree leaves suddenly falls to the ground in a colorfully coordinated show of epic proportions. A substantial amount of these leaves moves into the streams. Seeing fresh resources for their offspring, adult insects that themselves emerged from the streams deposit their eggs back into the flowing water. By this time, fish have grown and developed eggs that will hatch into small fry that need food. To support their developing young, fish will swim back upstream to deposit their eggs into an environment where they are surrounded by tasty insects. As the weather cools down, the process starts all over again.

In this way, streams are the veins and arteries of a lake ecosystem. As part of the Jefferson Project at Lake George, we are putting our finger on the pulse of Lake George by studying streams throughout the year. We are examining how material from the forest erodes into the streams, and how this translates into stream food webs. We are exploring the connections between stream and lake food webs, and questioning how these connections change through time. We are also investigating how humans impact these connections, by adding salt, pesticides, and numerous other human-derived contaminants into the downward flow of water.

Our methods are simple, but effective. Every month, we visit the major streams surrounding Lake George. We position a net into the stream so that it collects anything flowing downstream. We dislodge and collect any insects clinging to leaves and rocks by standing upstream of the net and kick the streambed. We find all sorts of stuff, like insects, crayfish, and even the occasional salamander and sculpin! After collecting insects, we use electronic meters to measure water quality. We also collect samples of stream sediments to examine how much silt and debris are collecting between rocks. Finally, we collect a few rocks. We scrub the scum from the rock surfaces into a bowl to determine how much bacteria and fungi are growing in the stream. Although simple, these methods are commonly used around the world and combine to illustrate a developing picture of the Lake George ecosystem. (In the image to the right, the author uses a kicknet to collect invertebrates.)

Throughout this research, we are pairing our data with the tremendous amount of data gleaned from the network of smart sensors positioned throughout the lake. These sensors are reporting information on lake characteristics, such as temperature, water clarity, nutrient levels, and dissolved oxygen. In combination with our observations in streams, we hope to develop a detailed understanding of how streams affect lake ecosystems. Importantly, we hope that our observations can help to develop modern strategies to monitor and conserve lake ecosystems that can be used to inform lake conservation efforts around the world.