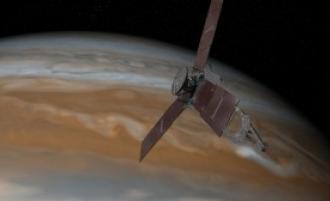 This summer, on July 4, all eyes were up in space as Juno successfully entered into orbit around Jupiter, where it was scheduled to perform measurements and transmit the data back to Earth. The environment there has very high levels of radiation, and thus the instruments on Jupiter were designed to withstand these radiation levels, thanks in part to the role that Rensselaer researchers played in the flight that has made history.

Juno is only the second spacecraft to orbit Jupiter and the first solar-powered craft to do so, following behind the nuclear powered Galileo probe, which orbited from 1995 to 2003.

Recently, the Office of News and Editorial Services caught up with Yaron Danon, director of the Gaerttner LINAC Center and the Nuclear Engineering Program director, who also serves as a professor in the Department of Mechanical, Aerospace, and Nuclear Engineering, to talk about the role that his team played in the Juno Mission.

According to Danon, the Star Tracker, the camera being used by Juno for navigation in space (by looking at stars) was tested for radiation resilience on the Rensselaer campus in 2005, when the design of the spacecraft started. Juno was launched into space in 2011 as part of the New Frontiers program, and entered into Jupiter’s orbit on July 4, 2016.

For years, faculty and students in the linear accelerator laboratory at Rensselaer have been conducting world-leading research related to experimental low-energy nuclear physics within the Nuclear Engineering Program.  In recognition of such efforts, in September 1997 the LINAC was designated as a Nuclear Historic Landmark by the American Nuclear Society as “one of the first laboratories, utilizing a high-power electron linear accelerator that generated accurate nuclear data for the design of safe and efficient nuclear power reactors.”

In 2012, Rensselaer recognized that work and its promise by elevating the laboratory to a School of Engineering center, the Gaerttner Linear Accelerator Center (LINAC).

“The Gaerttner LINAC Center can produce a radiation environment that simulates the radiation in space and in Jupiter’s belts; we used that to test the candidate camera in the early phase of the design of the Star Tracker,” said Danon. “It is very rewarding to know that a project that we completed back in 2005 finally came to successful fruition and that the Start Tracker is still working well.”

To document the event, on July 5, the Science Channel aired a special program on the Juno mission that included an interview with Danon. The program included footage from the Rensselaer LINAC Center where the radiation tests were performed. The program, titled Mission Jupiter, explored the high-stakes NASA mission that has gotten us closer to Jupiter than ever before. Five years in the making, the landmark journey is revealing secrets behind the planet’s spectacular auroras, mysterious core, and the giant’s iconic Great Red Spot.

Today, research underway at the LINAC Center fulfills the vision of The New Polytechnic, an emerging paradigm for higher education which recognizes that global challenges and opportunities are so great they cannot be adequately addressed by even the most talented person working alone. Rensselaer serves as a crossroads for collaboration—working with partners across disciplines, sectors, and geographic regions—to address complex global challenges, using the most advanced tools and technologies, many of which are developed at Rensselaer. Research at Rensselaer addresses some of the world’s most pressing technological challenges—from energy security and sustainable development to biotechnology and human health. The New Polytechnic is transformative in the global impact of research, in its innovative pedagogy, and in the lives of students at Rensselaer.

Research taking place at the Gaerttner LINAC is funded primarily by agencies within the U.S. Department of Energy. For example, earlier this year, the U.S. Department of Energy (DOE) provided a $9.44 million grant to help refurbish and upgrade the electron linear accelerator (LINAC) at the Gaerttner LINAC. Once the upgrades are complete, the Institute will be home to some of the nation’s most advanced technologies for measuring neutron interactions with nuclear materials.

According to Danon, despite their sophistication, today’s nuclear models cannot predict neutron interactions with the accuracy required for certain applications. In such cases, experiments—like those conducted at the LINAC—provide the missing information. Accurate nuclear data are important for the design of safe, reliable nuclear reactors and for reducing uncertainties in criticality safety applications.

The DOE grant was secured through the Naval Reactors Program and the Nuclear Criticality Safety Program. Funds include $7.4 million awarded directly to Rensselaer and $2.04 million to SLAC National Accelerator Laboratory to help design the replacement LINAC parts. The grant will also help fund a state-of-the-art research and education laboratory where nuclear engineering students will have access to LINAC experiments that reinforce theory and methodology discussed in class. Students also will be able to conduct experiments as part of research. The total project cost—for the LINAC upgrades and lab—is nearly $12 million. Rensselaer will provide the remaining funds.

The upgrades will represent the most significant overhaul of the LINAC in its 54-year history and will give Rensselaer “capabilities that are second to none for understanding and predicting resonance neutron interactions,” Danon said.

Currently, the primary research thrust of the center is obtaining nuclear data for use in a variety of applications, ranging from the design of nuclear reactors and analysis of criticality, to radiation damage and new nuclear medicine technologies.

Over the years, the LINAC has also played an essential role in undergraduate education, offering hands-on experience to a large number of undergraduate students through coursework and design projects. The facility regularly offers tours to local schools. The faculty believes that the LINAC has the potential to further broaden its use, by expanding into emerging fields. Such new initiatives will require an intensive interdisciplinary approach and more human resources, involving not only collaborators in materials and biology on campus, but also institutional partners in the Capital Region, New York state, and beyond.