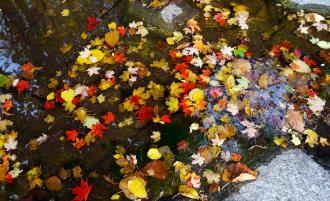 [The Jefferson Project at Lake George is conducting ongoing research into how human activities may be affecting the lake and surrounding wetlands. This guest blog by Aaron Stoler, a postdoctoral research associate in the lab of Jefferson Project Director Rick Relyea, summarizes recent research published as a featured article in the journal Freshwater Science. The Jefferson Project is a collaboration between Rensselaer, IBM Research, and The FUND for Lake George, founded to develop a new model for technologically enabled environmental monitoring and prediction to understand and protect the Lake George ecosystem and freshwater ecosystems around the world.]

What did you want to know?

Stressors on an ecosystem rarely act alone. For example, the spread of chemical contaminants like salt is generally associated with land-use changes. Increased use of road salt for deicing has elevated the salinity of many freshwater ecosystems and this contamination often occurs in areas where humans have caused changes in forest tree composition due to logging and fire suppression. For wetland ecosystems, changes in the diversity and abundance of trees can have dramatic effects. Leaf litter is food for many freshwater organisms, and different species of leaves provide unique resources (think about the chemicals that come from different tea leaves) and can alter the chemistry of wetlands. For example, red maple leaf litter contains high levels of soluble carbon that can darken the water. We wanted to know how the stress of salt contamination and changing leaf litter resources interact.

How did you go about it?

We conducted a large-scale, outdoor experiment using 48 tanks that each contained 130 gallons of non-chlorinated well-water. To each tank, we added either black oak leaves, red maple leaves, or no leaves (as a control) with or without road salt. We added sodium chloride road salt at four different concentrations (no salt added, 100, 200, and 800 milligrams of choloride per liter  or “mg/L”). After adding salt and the leaves, we introduced bacteria, fungi, and algae to all tanks. We also added animals that commonly live in wetlands surrounding Lake George, including two species of tadpoles (American toads and wood frogs), snails, and zooplankton. We followed the growth and development of all organisms for 1.5 months.

What did you learn?

In experimental tanks without salt, the presence of red maple leaves reduced the survival, mass, and development of American toads compared to tanks with oak leaves or no leaves. In contrast, both oak and red maple leaves increased the mass of developing wood frogs. By itself, salt had no effects on the amphibians. When we examined other species in the food web, we found that high concentrations of salt combined with red maple leaves caused a sharp decline in the abundance of some zooplankton species, which led to a subsequent increase in the algae that the zooplankton normally consume. Our results indicate that, by itself, road salt contamination only harms the wetlands when it is present at very high concentrations (i.e., above 200 mg/L, which is more than 10 times higher than Lake George but within the concentrations observed in many streams and wetlands). Importantly, however, these effects depend on which species of trees surround and drop their leaves into the wetlands each fall. The species of trees that are present, of course, often depends on human activities including logging, fire suppression, and the introduction of invasive pests that can kill particular species of native trees.

The research, titled “Leaf litter mediates the negative effect of road salt on forested wetland communities,” can be found with the DOI: doi/10.1086/692139