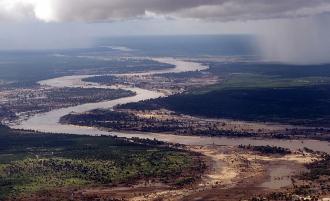 With support from the U.S. Agency for International Development, a team of researchers including Kevin Rose, assistant professor of biological sciences, will study the water resources of the Limpopo River Basin in southern Africa, considered one of the most biodiverse natural areas on the planet.

The research team will use satellites to measure river flow and water quality, specialized geophysical instruments to measure groundwater flow, and satellites and weather stations to monitor rainfall. Rose, a freshwater ecologist with a research focus on the role of freshwater ecosystems in the global carbon cycle, has been awarded $350,000 for his role in the project, using satellite remote sensing to understand water quality across the basin.

At more than 160,000 square miles, the Limpopo River Basin crosses Botswana, Zimbabwe, South Africa and Mozambique and is home to more than 18 million people living in both rural and urban areas, according to lead researcher David Kahler, a professor at Duquesne University. Residents use water from the basin for domestic uses, agriculture, businesses in urban areas and mining, with industrial water use growing rapidly.

The basin has experienced shorter rainy seasons in the past few years, leading to increasingly shorter growing seasons for farmers. Scientific projections indicate that the region will likely continue to see less rain in the future, making it essential for the region's decision makers to monitor water resources in the basin.

The study is intended to provide information to local, regional, and national stakeholder, and as part of that effort, the research team will provide hydrology training to those groups.