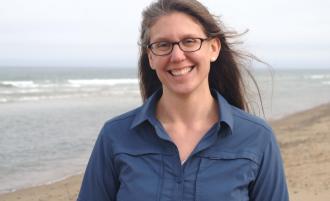 In the global carbon cycle, rivers are important players, pumping terrestrial carbon into the oceans. Ferried amid a cargo of dissolved organic matter – a category that encompasses molecules of things living, dead, and in the process of decay -- new sources of carbon enter the flow from a river’s headwaters to its mouth, while exposure to sunlight, microbes and other factors alter their original chemical structure along the route.

Carbon makes up about half of all dissolved organic matter (DOM), and offers a massive trove of information about the ecology within a watershed. By developing new approaches to probing the chemical clues contained in carbon-bearing DOM, Sasha Wagner has answered questions about upstream land use, how rainfall impacts the ecology of rivers, and the origins of fire-derived black carbon.

“The overarching goal of my research is to decipher the molecular messages of DOM and investigate the biogeochemical processes that occur in response to regional and global change,” said Wagner, who recently joined Rensselaer as an assistant professor of earth and environment sciences.  “My work looks at DOM as a whole, and black carbon as a subset – where it’s coming from, where it’s going, and how that’s changing over short and long timescales.”

There may be millions of different molecules in DOM, and the molecular composition of DOM in the headwaters of a river may be quite different from the mix in an estuary of the same river. Carbon washed into the headwaters may cycle through a series of DOM molecules as it flows downstream.

Collectively, the DOM composition in a watershed can tell a rich and detailed story of an ecosystem.

Black carbon for example, which is derived from organic materials burned in events like wildfires and fossil fuel combustion, reacts differently from the bulk of carbon in DOM. In past decades, researchers have established that rivers efficiently transport large amounts of black carbon from landscapes where they were previously presumed to be stored long-term in soils. The ultimate fate of black carbon is unknown, and forms one focus of Wagner’s research.

Black carbon has a unique heat-derived molecular signature that has traditionally been tracked using a ratio between molecular proxies, obtained by processing a sample. But that ratio is easily altered with exposure to sunlight, limiting the conclusions researchers can reach using the method.

“When I was writing papers, I found that I was always hedging my findings with caveats. I felt like I was hitting a wall,” said Wagner.

Wagner developed a new technique by pairing the traditional molecular proxies with stable carbon isotope signatures derived from HPLC-IRMS (high-performance liquid chromatography coupled with isotope ratio mass spectrometry). This method performs both the molecular proxy and stable carbon isotope analysis simultaneously, and makes it possible to track the movement and reactivity of black carbon as it moves from soils to the ocean.

“Because these stable carbon isotopes are presumed to be consistent as the black carbon moves through waterways, our results are very source specific,” Wagner said.

Another new approach could pair lab measurements of DOM with high resolution in situ data. With proper calibration, the combination of data could give Wagner better insight into the big picture of the watershed than water samples alone.

“By pairing different tools, we can answer very specific questions that feed into a much larger picture of a natural environment,” Wagner said.

Wagner earned a bachelor’s degree in biochemistry from the University of Delaware and a doctorate in environmental chemistry from Florida International University. Prior to her appointment at Rensselaer, she served as a postdoctoral researcher at the Skidaway Institute of Oceanography (University of Georgia) and Northeastern University.