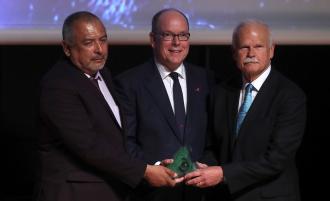 On behalf of H.S.H. the Sovereign Prince, I have the privilege to inform you that, upon proposal of the Board of Directors of the Foundation, His Highness has chosen to present you and Pr. Andres Garcia the 2019 Biodiversity Award for your remarkable study on "Climate ­driven declines in arthropod abundance restructure a rainforest food web" describing the alarming decline of insect populations, which was published in October 2018 in the Proceedings of the National Academy of Sciences of the USA (PNAS).

“H.S.H” is an abbreviation for the title “His Serene Highness.” H.S.H. Prince Albert II of Monaco – son of Princess Grace of Monaco, formerly American actress Grace Kelly -- created the foundation, “which is dedicated to environment protection, sustainable development and focused on Climate Change, Biodiversity and Water,” in 2006.

Lister and Garcia are shown above, receiving the award during the Prince Albert II of Monaco Foundation's Award Ceremony at the Museo Reina Sofia in Madrid, Spain on June 20.

The PNAS paper showed that, while temperatures in the tropical forests of northeastern Puerto Rico have climbed two degrees Celsius since the mid-1970s, the biomass of arthropods – invertebrate animals such as insects, millipedes, and sowbugs – has declined by as much as 60-fold. By documenting simultaneous declines in forest insectivores, species that eat insects and other invertebrates., Lister and Garcia showed that the forest’s food web was being disrupted.  Overall, their study highlighted an underappreciated threat to the functioning and biodiversity of tropical forests.