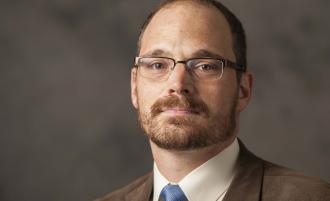 Meunier was officially awarded the professorship on September 26, when he delivered a lecture on “The Role of Low-Dimensional Materials in the Second Quantum Revolution” at the Université de Namur.

During his sabbatical, Meunier, head of the Department of Physics, Applied Physics, and Astronomy, is exploring an expansion of his research focus.

“Most of my research has focused on the electronic and vibrational properties of materials and now I’d like to further explore the optical properties of materials — how materials interact with light — to my work,” said Meunier. “Light matter interaction ties into areas of quantum computing and machine learning that my research group has begun to work in, so this expansion is a natural fit.”

As part of the professorship, Meunier will also deliver technical lectures at each of the four Belgium universities that supported his nomination, and interact with young scientists by working with specific research groups and participating in seminars.

Meunier is the Gail and Jeffrey L. Kodosky ’70 Constellation Chair at Rensselaer. His teaching focuses on computational physics and quantum mechanics education. He strives to bring modern computational approaches to the classroom, including state-of-the-art algorithms and the practical use of high-performance computing. Meunier joined Rensselaer in 2010 and has been the head of the department since 2015.