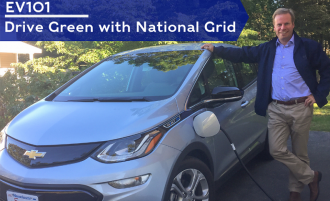 Electric vehicles are increasing in popularity, with new models entering the market all the time. But what is an electric vehicle, and what isn’t? Here’s a quick Electric Vehicles 101.

A basic conventional car runs on an internal combustion engine: drivers add gasoline, it ignites and releases energy that is translated into motion. In the process, however, the vehicle releases carbon dioxide, one of the greenhouse gases contributing to climate change. In the United States, the transportation sector is responsible for 28% of greenhouse gas emissions, more than any other sector.

An electric vehicle (EV), in contrast, runs on an electric current. There are three main types of vehicle commonly called "electric," and it's worth knowing the difference:

Visit drivegreen.nationalgridus.com for more information. A free webinar on EVs is being held December 5.

The team running the webinar is Green Energy Consumers Alliance, the nonprofit organization working with National Grid to bring you Drive Green with National Grid. For questions, they can be reached at drivegreenUNY@greenenergyconsumers.org.