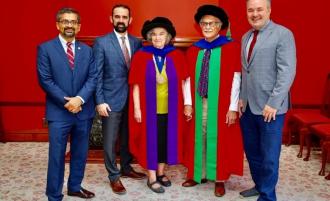 Georges Belfort, an Institute Professor at Rensselaer Polytechnic Institute in the Department of Chemical and Biological Engineering, and Marlene Belfort, an adjunct professor of biology and chemical and biological engineering at Rensselaer, recently received honorary doctorates from the University of Cape Town in South Africa — the latest in a long list of honors and accomplishments for the couple.

The world-renowned researchers were guest speakers at the December graduation ceremony for the South African university, where they both earned their bachelor’s degrees, and Georges Belfort presented a separate talk titled “How Can Engineering Help Understand Alzheimer’s Disease?”

“Professors Marlene and Georges Belfort have made significant and lasting contributions, not only at Rensselaer, but throughout the scientific world,” said Shekhar Garde, dean of the School of Engineering at Rensselaer. “It was an honor to hear them speak at this commencement ceremony and witness them receive such a well-deserved honor.”

The Belforts’ commitment to research and education extends beyond the classroom and the lab. For example, they established the Life at the Interface of Science and Engineering Endowed Annual Lecture Series at Rensselaer and the University at Albany, where Marlene Belfort is also a distinguished professor. This series has brought Nobel Prize winners and other esteemed experts to Rensselaer.

Marlene Belfort is a leader in the field of molecular genetics and biochemistry. Her research explores the structure, function, and regulation of introns and inteins — elements that interrupt genes — including their applications in biotechnology and infectious disease.

She is a member of the National Academy of Sciences, has published more than 200 scientific papers, co-edited two books, received several National Institutes of Health grants, and has mentored numerous younger scientists, technicians, undergraduates, and postgraduates. Marlene Belfort has received the American Society for Microbiology Alice C. Evans Award in recognition of her efforts toward the advancement of women in microbiology, and very recently was the recipient of UAlbany’s Citizen Laureate Award.

Georges Belfort’s significant contributions in the fields of separations engineering, biochemical engineering, and surface science and engineering include: membrane filtration, desalination, pervaporation, nature-inspired selective transport through the nuclear pore complex, synthetic membranes for separating molecules, biocatalysis, intein-fusion affinity separations, sensors, synthetic membrane surface modification, interfacial phenomena and rheology, single molecule force spectroscopy, protein-protein interactions at surfaces, adsorption processes, and a greater understanding of how proteins misfold and lead to the formation of fibrils — a problem associated with Alzheimer’s disease and other disorders. He is a member of the Center for Biotechnology and Interdisciplinary Studies at Rensselaer.

He has published more than 245 peer-reviewed papers, has been awarded 8 U.S. patents, has authored or co-authored three books, and has received numerous professional awards including the American Chemical Society (ACS) E.V. Murphree Award in Industrial and Engineering Chemistry, the AIChE Clarence Gerhold Award in Separation Science and Technology, the AIChE Food, Pharmaceutical and Bioengineering Division Distinguished Service Award in Chemical Engineering, and the ACS Award in Separation Science and Technology. He has also won the Rensselaer Best Teacher Award in Engineering and the William H. Wiley 1866 Distinguished Faculty Award. Georges Belfort is also a member of the National Academy of Engineering, a foreign corresponding member of the Academy of Sciences of Bologna, Italy, and a fellow of the American Institute for Medical and Biological Engineering.