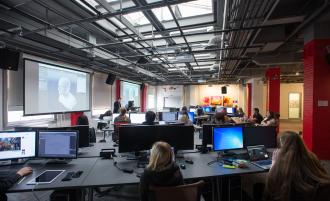 The Princeton Review recently ranked Rensselaer Polytechnic Institute as one of the top schools at which to pursue a graduate degree in game design.

The Rensselaer Games and Simulation Arts and Sciences (GSAS) program was ranked No. 23 in the publication’s 11th annual ranking list of top Graduate Schools for Game Design. It is the first time the GSAS graduate program has been ranked on this particular list.

According to the Princeton Review, the graduate programs were selected and ranked “based on a survey it conducted in 2019 of administrators at 150 institutions offering game design coursework and/or degrees in the United States, Canada, and some countries abroad.”