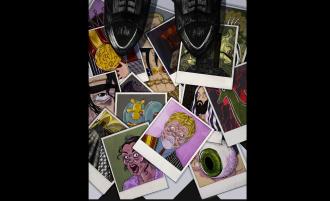 The Frightened President, a comedy-horror film by Jefferson Kielwagen, a lecturer in the Department of Arts at Rensselaer Polytechnic Institute, premiered at the fourth annual Guarufantástico Film Festival in Guarulhos, Brazil. The film is available for online viewing until the end of August.

The short feature was one of 60 independent films chosen as part of the professional category. Because of the COVID-19 pandemic, the premiere was virtual.

“Film premieres are exciting times,” Kielwagen said, “even if the global health crisis means we can’t all be in a theater to watch it together. Being online makes the film accessible to a much larger number of viewers. I’ve been getting feedback from strangers in different parts of the world who would not have seen the film otherwise.”

The Frightened President tells the tale of a newly elected president, his wife, and their first night in the presidential palace beset by otherworldly energies. According to Kielwagen, the film is an allegory of early 21st century western democracy.

“It’s primarily meant to be fun,” Kielwagen said, “but surely a presidential protagonist has political implications. I think the film expresses a feeling of confusion in face of the deterioration of western democracies.”

Kielwagen, who also goes by the name Zé Kielwagen, previously released the award-winning experimental film Gede Vizyion. Next up for the artist is a short documentary exploring the relationship between voodoo and queerness in Haiti that is expected to screen this winter.