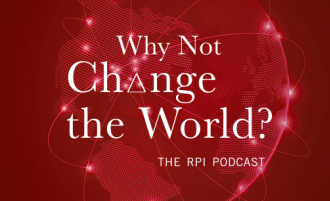 The new episode of Why Not Change the World? The RPI Podcast features two researchers whose work is providing new perspectives on old conflicts.

The first interview focuses on military conflict, and how to revisit these historical events through game design. Maurice Suckling, an assistant professor in the Games and Simulation Arts and Sciences program at Rensselaer Polytechnic Institute, is best known for his work on video games such as Driver, Fortnite, and the Wii Fit series. He has recently turned his focus to designing board games based on historical conflicts. His recent titles include “Freeman’s Farm 1777” and “Chancellorsville 1863.” During the podcast episode, he discusses his approach to designing, playing, and learning from these war games.

The episode also tackles the never-ending, high stakes battle between hospitals and germs. Ted Krueger, an associate professor of architecture at Rensselaer, presents the concept of “architectural probiotics,” which would require rethinking the attempts to wipe out all living organisms from surfaces in hospitals and finding ways to keep the good bacteria around. Designing ways to cultivate good bacteria might better protect people by slowing the proliferation of drug-resistant bacteria.