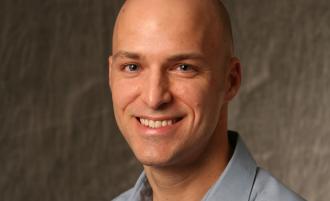 David Corr, an associate professor of biomedical engineering at Rensselaer Polytechnic Institute, has been elected as a fellow of the American Society of Mechanical Engineers (ASME).

The distinction of fellow recognizes ASME members who have contributed significant engineering achievements. Corr joins a distinct group of less than 3,500 fellows among nearly 90,000 ASME members.

Corr’s research specializes in soft tissue biomechanics, laser-based biofabrication techniques to create cellular microenvironments, and developing cell-based strategies to engineer musculoskeletal soft tissue replacements. His group investigates the impact of various biophysical stimuli on cell behavior and fate decisions, and seeks to use this to improve functional soft tissue engineering. His lab pioneered a bioprinting method to create spatially-precise cellular cultures and constructs, which is now being used to engineer tissue models for applications in cancer and in vitro diagnostics. His group is also researching ways to improve tissue-engineered tendon and skeletal muscle through the use of an embryonic-inspired scaffold-free approach to tissue generation.

He is a member of several other professional societies, including the Orthopaedic Research Society and Biomedical Engineering Society. Corr has held memberships in the American Physiological Society, the American Society of Biomechanics, the Canadian Society for Biomechanics, and the Wound Healing Society. Corr is a member of the International Advisory Committee, and has served as the scientific program chair and conference chair for the International Symposium on Ligaments and Tendons. Within ASME’s Bioengineering Division, Corr is a two-term associate editor of the ASME Journal of Biomechanical Engineering, and he is a member of the technical committee on Biosolids and Tissue, as well as the Cellular Engineering technical committee.