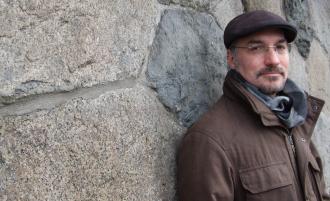 Matthew Goodheart, an assistant professor of music composition in the Department of Arts in the School of Humanities, Arts, and Social Sciences (HASS) at Rensselaer Polytechnic Institute, will present “Berlin Head Metal IV” at the virtual StreamFest Streaming Music Festival on Friday, December 18 beginning at 7 p.m.

The festival is presented by Infrequent Streams, which is dedicated “to presenting creative voices with a prominent focus on promoting diversity and a community mindset oriented toward mutual affinity for experimental practices.”

The song is the fourth and final movement of a 40-minute binaural sound work titled Berlin Head Metal. In a practice Goodheart calls “re-embodied sound,” both natural sounds and sounds created from metal percussion instruments were recorded. These sounds were then played back through the same instruments using surface transducers and recorded again, a process that was repeated a number of times.

“It’s an honor to have this piece selected for StreamFest,” Goodheart said. “’Berlin Head Metal IV’ is designed for headphone listening, a form that creates feelings of intimacy with sound and is an experience that has become necessary and familiar in the COVID-19 online era.”

Animation that will accompany Goodheart’s composition was created by Shawn Lawson, an associate professor at Arizona State University.

Leo (Hyun Jung) Chang ’25, a doctoral student in HASS who specializes in using amplified gongs through voice, will perform two pieces at StreamFest.

For Chang’s first performance, on the same evening as Goodheart, he will present a video work in a virtual trio with Chris Williams on trumpet and Miriam Parker engaging in movement and video. Then, on Sunday, December 20, Chang plays remotely with a different group, Ensemble Consensus, as they premiere a new audiovisual piece titled “Here There, and Here There” from their debut album, Song Cycling. Chang describes this album as “an effort to develop a spontaneous and communal songwriting process.” Performances on Sunday’s StreamFest begin at 6 p.m.