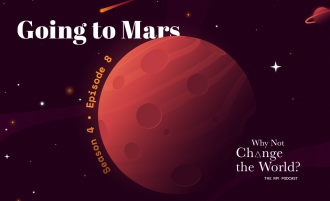 This week’s episode of Why Not Change the World? The RPI Podcast explores the science and engineering involved in the exploration of Mars.

In February, Mars experts and researchers from the Rensselaer Astrobiology and Research Education (RARE) Center hosted a virtual watch party of the NASA Mars 2020 Perseverance rover landing. This special episode of the podcast revisits that event.

NASA’s Mars 2020 Perseverance rover is the most sophisticated machine ever sent to the red planet. According to NASA, the Perseverance rover is designed to better understand the geology of Mars and seek signs of ancient life. The mission will collect and store a set of rock and soil samples that could be returned to Earth in the future, and test new technology to benefit future robotic and human exploration of Mars.

Hosted by Karyn Rogers, director of the RARE Center and associate professor of earth and environmental sciences at Rensselaer, the watch party included a panel discussion with astrobiologists Andrew Steele, a member of the NASA Sample Analysis at Mars team from the Carnegie Institution for Science; Brian Hynek, a Mars planetary scientist from the University of Colorado Boulder; and S. Mike Angel, an expert in optical spectroscopy for planetary exploration from the University of South Carolina.