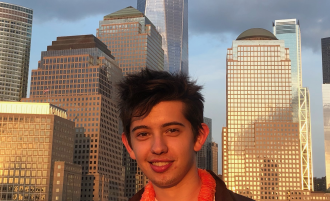 Leon Montealegre is the inaugural recipient of the Nuvalence Builder Award, which recognizes one or more graduating seniors at Rensselaer Polytechnic Institute who have demonstrated superior skills through extracurricular projects in hardware and software innovation.

Montealegre, who is graduating this week with degrees in computer science, applied math, and physics, won the $2,000 prize for his portfolio of projects, including a free online circuit builder called Open Circuits and a simulation of fluid dynamics called Shallow Water Equations. He was nominated by Wes Turner, a senior lecturer in the School of Science at Rensselaer.

The new award was created by Nuvalence, a platform-focused consulting company led by Rensselaer alumni. Managing Partner and Chief Technology Officer Sinclair Schuller and Partner and Vice President of Engineering Abraham Sultan both hold degrees in computer science from the Institute. Schuller led the selection panel for this year’s inaugural prize.

After graduation, Montealegre will complete a summer internship at Google and then return to Rensselaer in the fall to pursue a master’s degree in computer science.