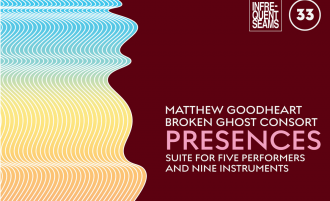 Composer, improviser, and sound installation artist Matthew Goodheart, an assistant professor of music composition in the Department of Arts in the School of Humanities, Arts, and Social Sciences (HASS) at Rensselaer Polytechnic Institute, will release his latest album on Friday, June 25.

Presences: mixed suite for five performers and nine instruments is a multi-movement collaborative composition created by Goodheart and performed by his international ensemble, Broken Ghost Consort.

Goodheart, known for his “reembodied sound” technique of activating musical instruments using surface transducers, brings this method to the ensemble as a whole, harnessing the players’ instruments with transducers so that they produce electronic sounds as the performers play. The musicians are also surrounded by four transducer-activated metal percussion instruments, creating an expansive, hybrid ensemble that blends performance and sound installation.

The collaborative nature of the work emerges from the compositional design. While Goodheart provided an overall framework, each musician recorded a set of instrumental sounds of their own choice. These sounds were then manipulated according to the compositional parameters, generating the electronic components to be played back through the attached transducers so that the musicians perform alongside a recording of themselves and the autonomously sounding metal percussion.

Over the course of four movements, this process becomes a multi-leveled platform to explore complex timbres, spatialized sound, instrumental acoustics, interaction, and the nature of time and materiality in sonic creation.

Presences is published by Infrequent Seams.