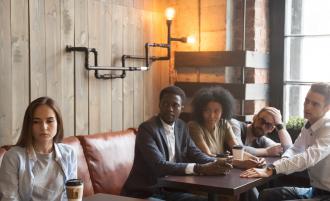 A paper published today in Scientific Reports uses network science to study how our opinions influence our social networks. Corresponding author Boleslaw Szymanski, a network science expert and professor at Rensselaer Polytechnic Institute, offered the below informal summary of the findings as published in the paper "Creation, evolution, and dissolution of social groups."

Agreement on values shared by people with whom we regularly interact (which we call “homophily” in the social sciences) is the basis for successful relationships in groups. Accordingly, we introduced a model of the person’s enjoyment (or utility) of interactions in a group depending on the level of values this person shared with members of the group. We reached two main conclusions in this paper:

In a quest for this satisfaction, people may decide to leave some groups and join others. In doing so, they unintentionally make the groups where they spend most of their time like-minded and that leads to polarization in values and opinions across groups. This happens even when people make these decisions altruistically, by considering how their decisions will affect the satisfaction of the other group members.

The second important conclusion is that when we join a university, a workplace, or an organization, holding opinions that are unpopular in those environments limits how much satisfaction we can derive from group interactions there. This means that people holding minority opinions risk leaving such organizations earlier than others. We found that holders of minority opinions change friends more frequently than others and suffer from lower satisfaction in their current group interactions. This is especially important for young people choosing a university to attend; in such a choice, not only professors but also peer students and their views need to be considered.

At Rensselaer, Szymanski was joined in the research by James Flamino. Co-authors also included Ashwin Bahulkar at the Społeczna Akademia Nauk in Poland, Kevin Chan of the U.S. Army Research Laboratory, and Omar Lizardo, at the University of California, Los Angeles. The full paper can be found on the Scientific Reports website.