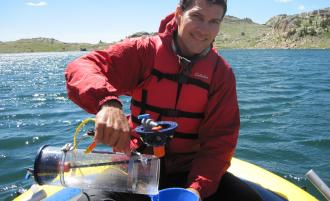 Freshwater expert Kevin Rose has been named to a panel that will inform the New York State Climate Impacts Assessment: Understanding and Preparing for Our Changing Climate. The assessment, recently announced by New York Governor Kathy Hochul, will explore how climate change affects communities, ecosystems, and the economy in New York State.

Rose, an assistant professor of biological sciences at Rensselaer Polytechnic Institute, is an expert on climate change impacts on freshwater lakes and streams. Lakes are globally important hot-spots of carbon cycling, making up less than 3% of the landscape, but burying more carbon than all the world’s oceans combined. Climate change is having an impact on that cycle. For example, in research published recently in Nature, Rose reported that oxygen levels in the world’s temperate freshwater lakes are declining rapidly – nearly 10 times faster than in the oceans – a trend driven largely by climate change. Another recent finding shows that lakes which are browning, or darkening as they carry more dissolved organic matter, are less productive and less able to sustain life.  A recent recipient of a prestigious National Science Foundation CAREER award, Rose will examine how a warming world may be impacting the amount of carbon dioxide lakes emit into the atmosphere.

In his role on the panel, Rose will work with a diverse group of experts and stakeholders from across the state to develop a science-based assessment of observed and projected climate impacts on New York’s communities, ecosystems, infrastructure, and economy. This assessment will build on New York’s first statewide climate change assessment (ClimAID), which was released in 2011.

The collaborative climate research effort is being led by the New York State Energy Research and Development Authority (NYSERDA), and conducted in partnership with academic institutions, science organizations, community leaders, and industry representatives, among others. The final research and outreach products will provide an accurate and comprehensive scientific understanding of probable climate change-related impacts, in an effort to inform decisions around climate resiliency, preparedness, and environmental disaster response and recovery.