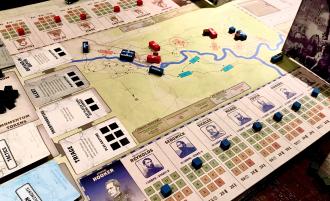 Chancellorsville 1863, a board game designed by Maurice Suckling, an assistant professor in the Games and Simulation Arts and Sciences program at Rensselaer Polytechnic Institute, took top prize in the Best American Civil War Board Game division of the 2020 Charles S. Roberts Milieu Awards.

“Military history can seem rather predictable when we have a god’s eye view of knowing exactly where everyone was at any given time, and decisions taken by contemporaries can seem baffling,” Suckling said. “But by designing a game where we, in the present day, must recreate a situation where the players don’t know all the answers, where armies are hidden and obstacles unseen, we can get a whiff of history as it was lived. Historical board games allow us to see that what seems a foregone conclusion and predictable to us felt very far from that to people in the eye of the storm of history.”

Suckling, who teaches about game writing, board games as storytelling, and games as historical simulations, is also well known for his video game work on Driver, Fortnite, and the Wii Fit series.

Suckling was recently featured by the PBS affiliate WMHT on the show AHA! About the Arts where he discussed the growing popularity of board games.

Presented annually, the Roberts Awards honor excellence in the Conflict Simulation Game Industry and are given to board games, computer games, and individuals for merit in the design, development, and production of war or conflict simulations of historical, hypothetical, science fiction, or fantasy conflicts.