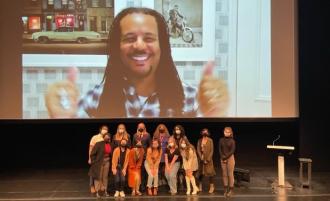 Winners for the 81st annual McKinney Writing Contest at Rensselaer Polytechnic Institute were announced on April 6 in an in-person ceremony that featured a livestreamed reading by the Pulitzer Prize-winning author Colson Whitehead.

The McKinney Contest recognizes top writers in the Rensselaer student community. An average of 230 students enter each year to compete for a total of more than $4,000. Prizes are awarded in both undergraduate and graduate divisions in four different categories: Poetry, Fiction or Drama, Essay/Creative Nonfiction, and Electronic Mixed Media Using Language.

J. Hogan, an Architecture undergraduate, took the top prize in the Essay/Creative Nonfiction category for “Architectural Ambiguities in the Gothic.”

Building Sciences and Design, Innovation, and Society student Jordan Jackson was awarded first place for “We Were Silenced” in the Electronic Mixed Media Using Language category.

This year, a special category called Language and Empowerment was established to reflect the Department of Communication and Media’s emphasis on language as a primary vehicle for the work of democracy, social justice, and equity. The collection sought to highlight emerging writers working creatively, perhaps in more than one language, with words they deem urgent and essential to the discourse of diversity, equity, and inclusion.

Nyah Philip, an undergraduate student in Environmental Engineering, won first prize in this category with the submission “No Doubt: A Poem About Black Resiliency.”

“In this time of constant upheaval, Rensselaer students once again show their grit and creativity through the work of the McKinney Writing Contest,” said Skye Anicca, a lecturer in the Department of Communication and Media at Rensselaer and the chair of the McKinney Award Committee.

For a full list of award winners in all categories, visit this link.

The McKinney Writing Contest began in 1941 when Dr. Samuel P. McKinney, Class of 1884, established an endowment as a memorial to his late wife, Mary A. Earl McKinney. It is administered by the Department of Communication and Media in the School of Humanities, Arts, and Social Sciences, and is supported by the Vollmer W. Fries Lecture Series, the Rensselaer Union, Friends of Folsom Library, and The New York State Writers Institute.