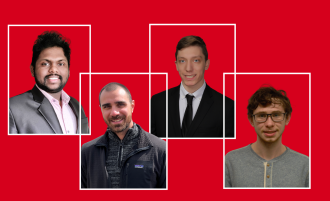 Four Rensselaer Polytechnic Institute students affiliated with the Center for Mobility with Vertical Lift (the MOVE Center) won the prestigious 2022 Vertical Flight Foundation Scholarship awards through the Vertical Flight Society. These awards recognize outstanding accomplishments in the field of vertical flight, with specific awards named in honor of different pioneers of the field.

“Congratulations to all the winners. Rensselaer Polytechnic Institute students continue to meet the Vertical Flight Society’s standards of excellence, which is a credit to the students and to Rensselaer,” said Farhan Gandhi, Rosalind and John J. Redfern Jr. ’33 Endowed Chair in Aerospace Engineering, and Aerospace Program Director, and MOVE Director.

This year’s winners include:

Jonah Whitt earned the Bell Textron Scholarship, which is awarded by the global aviation company to the competitor with the highest overall score. Whitt is a junior at Rensselaer studying aeronautical engineering. He has been a member of the MOVE Center under Dr. Gandhi since April 2021, and has worked alongside Dr. Gandhi on the study “Effects of Damper Failure on Helicopter Ground Resonance,” presented at VFS Forum 78. Whitt is also working for DEVCOM Army Research Laboratory as a developer for “STADIUM,” which is a high-fidelity multicopter simulation built within the Unity game engine. After completing his undergraduate degree in December 2022, Whitt plans to begin his Ph.D. at the MOVE Center with a continued focus on rotorcraft modeling and simulation.

Alexander Stillman earned the James Howlett Scholarship, which is named for named for the Sikorsky handling qualities and flight dynamics simulation leader and visionary. Stillman graduated with a Bachelor of Science degree in Aeronautical Engineering from Rensselaer in May 2021, and continued immediately thereafter for a Ph.D. in aeronautical engineering at the MOVE Center, under the supervision of Dr. Gandhi. His research, so far, has focused on coaxial helicopters and large multi-rotor wind turbines. He was also awarded a Department of Defense SMART Fellowship starting in the fall of 2022, which will cover tuition and stipend through the course of his Ph.D. and given him the opportunity to work with a sponsoring Department of Defense lab during the summers.

Neelanga Thelasingha, who worked with Dr. Agung Julius, earned the Robert Head Scholarship, which honors the engineering pioneer from McDonnell/Hughes/McDonnell Douglas/Boeing. He is a Ph.D. student in electrical, computer, and systems engineering, who is working on optimal control and motion planning in autonomous systems like unmanned aerial vehicles (UAVs). He earned his Master of Science in Computer and Systems Engineering from Rensselaer in 2021 and his Bachelor of Science in Electrical and Electronic Engineering from the University of Peradeniya, Sri Lanka in 2017. His recent work includes heuristic-based fast motion planning methods for UAVs.

Orazio Pinti, who worked under Prof. Assad Oberai on a joint VLRCOE/MOVE project, won the Walter J. Hodgson Scholarship, which is named for the late U.S. Air Force and Hughes Helicopter test pilot. Pinti is a Ph.D. student at the University of Southern California, where he works in tight collaboration with the MOVE Center at Rensselaer. He is focused on the development of multi-fidelity modeling techniques with application to vertical flight.

Stillman, Whitt, Thelasingha, and Pinti were recognized at the Vertical Flight Society’s 78th Annual Forum May 10-12 in Fort Worth, Texas.