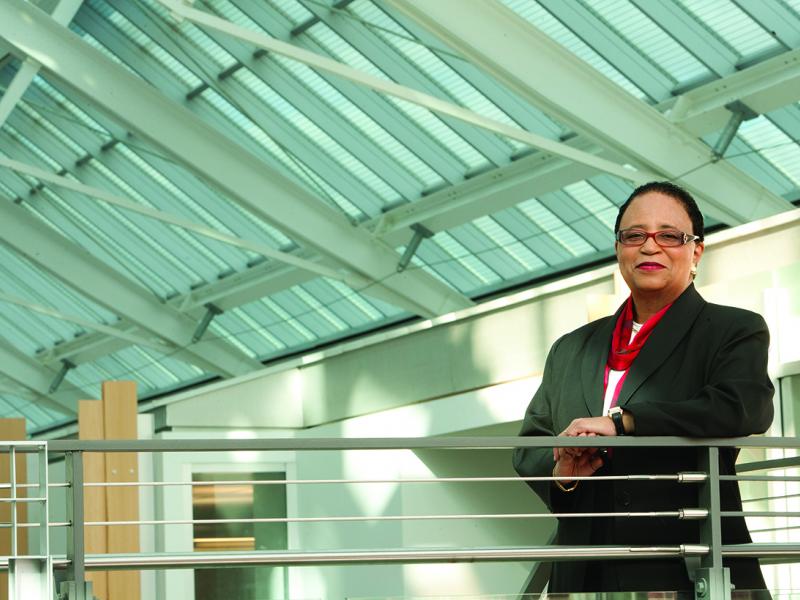 For more than a quarter of a century, the Albany Business Review has been recognizing and celebrating the achievements of the Capital Region business community. Rensselaer Polytechnic Institute President Shirley Ann Jackson and School of Engineering Professor Daniel Walczyk were among 12 individuals honored for outstanding achievements in technology and business during the Feb. 17 Albany Business Review Tech Awards event. Photo credit: Rensselaer Polytechnic Institute

Troy, N.Y. — For more than a quarter of a century, the Albany Business Review has been recognizing and celebrating the achievements of the Capital Region business community. The first Achievement Awards event was held in the 1980s. Rensselaer Polytechnic Institute President Shirley Ann Jackson and School of Engineering Professor Daniel Walczyk were among 12 individuals honored for outstanding achievements in technology and business during the Feb. 17 Albany Business Review Tech Awards event.

During the program, Dr. Jackson delivered the keynote address, and also received the Career Achievement in Technology Award. According to the Albany Business Review, the award recognizes Dr. Jackson’s career achievements at Rensselaer, particularly her leadership and her efforts to draw attention to what she calls “the quiet crisis” and her work to bring more women and minorities into science and engineering fields.

In remarks to the audience, Dr Jackson noted that, “a career achievement award, such as the one the Albany Business Review has graciously given to me today, inevitably prompts some contemplation of the long-term. As I look around, it is with great satisfaction. Together, we have helped a region of great natural beauty, with a rich industrial history, develop into a vibrant innovation ecosystem that supports a growing technology- and knowledge-based economy.”

Dr. Jackson has served as the 18th president of Rensselaer since her appointment in 1999. At Rensselaer, Dr. Jackson has undertaken a transformation of the university’s pedagogical approach with the implementation of The New Polytechnic, emphasizing collaboration across disciplines, sectors, and regions to address key intersecting challenges and opportunities in energy security, health, food, water, and national security, as well as the linked challenges of climate change and allocation of scarce resources so critical to our future.

“When I became president of Rensselaer Polytechnic Institute in 1999, I was profoundly appreciative of its long legacy of discovery, invention, and entrepreneurship—but sought to extend and deepen that legacy by supporting the creativity of our students, our faculty, and local industries all the way along the continuum from laboratory to marketplace—and fostering, along with government and industry partners, an innovation ecosystem that does not allow great concepts to wither for lack of nourishment at a crucial stage,” Dr. Jackson said.

In 2014, Former President Barack Obama appointed Dr. Jackson as Co-Chair of the President’s Intelligence Advisory Board, which assesses issues pertaining to the quality, quantity, and adequacy of intelligence activities. In addition, she sits on the Secretary of State’s International Security Advisory Board and the Secretary of Energy Advisory Board. From 2009 to 2014, Dr. Jackson served on the President’s Council of Advisors on Science and Technology, which assists the White House in policy formulation in the many areas of science, technology, and innovation that are crucial to strengthening the economy and increasing opportunity. In 2011, she co-authored a report to the President offering an overarching strategy for revitalizing the leadership of the nation in manufacturing.

In 2015, Dr. Jackson received the National Medal of Science, the highest honor for scientific achievement bestowed by the United States government on. The award recognizes individuals deserving of special recognition for their outstanding cumulative contributions to knowledge in the physical, biological, mathematical, engineering, or behavioral or social sciences, in service to the nation.

“Educating young people who can recognize problems—and confidently address them—is one of the great contributions Rensselaer Polytechnic Institute has made to the Capital Region since it was established in 1824,” Dr. Jackson said.

Dr. Jackson further noted that “Rensselaer has never educated incremental thinkers, people who tinker around the edges. One sees this in the young entrepreneurs emerging from Rensselaer today, who have zeroed in on crucial challenges—and are addressing them with brio.”

While delivering remarks at the Tech Awards luncheon, Dr. Jackson noted that “as we consider the development of talent, it is a great honor to share the day with Dr. Daniel Walczyk, professor in the Rensselaer Department of Mechanical, Aerospace, and Nuclear Engineering and director of the Center for Automation Technologies and Systems (CATS),” who received the inaugural Burt Swersey Higher Education Award.

“Professor Burt Swersey served as a lecturer in the Rensselaer Department of Mechanical, Aerospace, and Nuclear Engineering for more than 25 years. He was an inventor and an entrepreneur, but his true passion was getting our students to believe in themselves. His Inventor’s Studio class, a capstone design class for Rensselaer seniors in engineering, became famous nationwide for its success in inspiring student innovators. A number of U.S. patents arose out of the Inventor’s Studio.”

An advanced manufacturing expert, Walczyk is also a licensed Professional Engineer in New York state. Walczyk received his bachelor’s degree in 1986 from Syracuse University, and went on to earn his master’s degree in 1991 from Rensselaer and doctoral degree in 1996 from the Massachusetts Institute of Technology.

According to the Business Review, the Burt Swersey Higher Education Award recognizes an inspiring educator who has influenced young people to succeed in technology or business.

After working in industry for seven years, first as a mechanical design engineer at Schneider Packaging Equipment Company and later as a mechanical R&D engineer at General Electric, Walczyk joined the Rensselaer faculty in 1996. His research focuses on new manufacturing processes for thermoset and thermoplastic composite parts, biocomposite materials, membrane electrode assemblies used in fuel cells, as well as additive manufacturing, rapid tooling and fixturing, and biomedical device design and manufacturing. He holds 10 U.S. patents for his manufacturing innovations and inventions.

In 1998, the White House honored Walczyk with the prestigious Presidential Early Career Award for Scientists and Engineers (PECASE) for his creative advances in rapid tooling methods and development of undergraduate and graduate courses in design and manufacturing. The National Science Foundation (NSF) recognized Walczyk in 1997 with a Faculty Early Career Development (CAREER) Award. Walczyk was also a recipient of a German Academic Exchange Service (DAAD) fellowship in 1995, the 1998 Loctite Corporation Summer Engineering Faculty Fellowship, and the 2000 Ralph R. Teetor Educational Award from the Society of Automotive Engineers (SAE). He is a fellow of the American Society of Mechanical Engineers (ASME).

At Rensselaer, Dr. Jackson has worked to implement The New Polytechnic, an emerging paradigm for teaching, learning, and research. The foundation for this vision is the recognition that global challenges and opportunities are so great they cannot be adequately addressed by even the most talented person working alone. Rensselaer serves as a crossroads for collaboration—working with partners across disciplines, sectors, and geographic regions—to address complex global challenges, using the most advanced tools and technologies, many of which are developed at Rensselaer. Research at Rensselaer addresses some of the world’s most pressing technological challenges—from energy security and sustainable development to biotechnology and human health. The New Polytechnic is transformative in the global impact of research, in its innovative pedagogy, and in the lives of students at Rensselaer.

To read the Albany Business Review article titled: “Rensselaer’s Shirley Jackson is focusing on the next generation,” visit: http://bit.ly/2mbYjzG